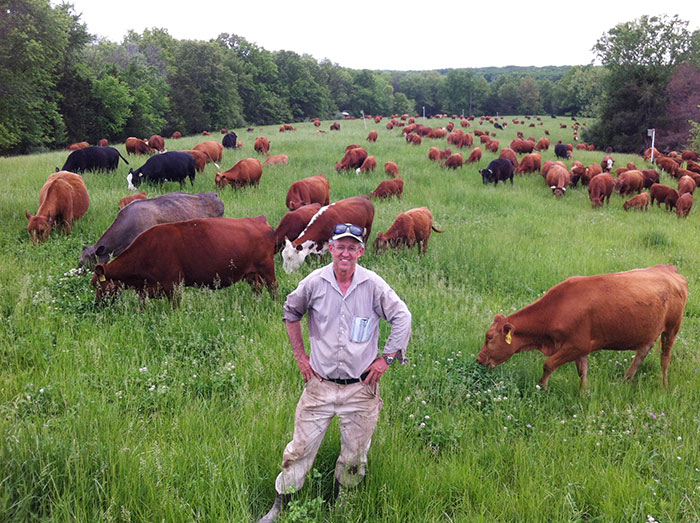 Green Pasture Farms in central Missouri comprises many fields that were once idle cropland shrouded with shrubs and trees. It wasn’t until Greg Judy, owner of the farm, took over these acres that they were transformed into a highly productive grazing system. While Judy can measure his success by the performance of his cattle, he is more likely to do so by the quality of his forages and the health of his soil.

At the Heart of America Grazing Conference in Mt. Vernon, Ill., Judy spoke about his career as a regenerative grazier. Most producers depend on the land to feed their livestock, but Judy is more concerned with how his livestock can feed the land. He relies on his cattle’s ability to transfer nutrients to the ground to enhance forage growth.

“If we feed the microbes in the soil, these microbes will feed our livestock,” Judy asserted. “By doing so, we are going to have good forage, healthy animals, a better environment, and a happy livelihood on the farm.”

It has taken him years of refining his management style to determine the best practices to implement on his farm. Over time, Judy has developed many rules-of-thumb for crop and livestock production, which he explained as he shared his farm’s story with the audience.

When Judy started grazing cattle, he moved multiple herds two times a day. Not only did this require ample time and labor, but the high stocking rate and short recovery period between rotations negatively impacted his forage’s ability to grow. Eventually, Judy combined his herds into one and established a more flexible grazing approach.

When forages grow fast, Judy moves his cattle quickly. When plant growth slows, so do the timings of his rotations. Judy also evaluates plants before his cattle enter a new paddock, and he encouraged his listeners to follow suit.

“Make sure your plants are fully recovered,” Judy said. “If the tip of the plant is sharp, it is fully regrown. If it’s blunt on the end, that means the plant hasn’t fully regrown since the last grazing period. If you graze livestock on this, it’s going to hurt your fields.”

Once cattle have started grazing a new paddock, Judy makes sure not to leave them in there for too long. Animals can selectively graze the most palatable plants and leave undesirable ones, leading to uneven regrowth.

He recommended rotating cattle when one-third of the forages in the pasture are grazed, one-third are trampled, and one-third are left standing. This ensures some palatable plants will be available in the future. Trampled plants are beneficial, too, because they provide organic matter for decomposers in the soil to feed on. As a result, these organisms produce waste that can create better conditions below the ground.

“All the litter that is trampled to the ground is consumed by earthworms,” Judy said. “They eat it and produce earthworm castings, which have a pH of 7. We need a lot more of these castings, and the way to get them is by feeding worms trampled plants.”

In addition to leaving trampled plants on the ground, Judy advocated for planting cover crops. This past summer, he drilled a mix of nine different crop species into tall fescue. Despite the drought-like conditions he and many other Midwestern farmers encountered, Judy said his soil was better equipped to hold water because of the cover crops he planted. 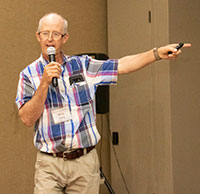 “Once I drilled in that crop, it didn’t rain the rest of the summer,” Judy recalled. “However, there was enough fertility and moisture in the soil, and we got an unbelievable amount of wealth without any rain. The field was just so healthy.”

Judy justified the health of his field by observing the characteristics of his soil. Planting cover crops added roots to the ground, which promoted a well-aggregated soil structure. This improved plant growth and water infiltration, which contribute to a reduced risk of water runoff and erosion.

Even in places cover crops were not drilled on Green Pasture Farms, seeing a bare spot of soil is unlikely. Judy prompted farmers to identify these areas and cover up exposed soil with a source of organic matter, such as hay. He also suggested taking these locations out of rotation until vegetation is present again.

Months before the first snowfall of the year, Judy begins stockpiling tall fescue. He grazes it and unrolls bales throughout the winter for animals to strip graze. Judy acknowledged some forage could be wasted in this process, but he said the benefits of this practice outweigh the costs.

One of the benefits he noted was added fertilizer in a field since cattle are grazing year-round. “As a result of more manure in the pasture, we are going to grow more grass next year,” Judy stated. “The grass is going to be thicker, greener, and plant spacing is going to be closer together.”

When the temperatures begin to rise in the spring and forages begin to flourish, Judy keeps feeding his animals some stockpiled fescue. Cows can encounter digestive issues when their diets transition to fresh grass, so continuing to feed small amounts of stockpiled fescue can help them maintain their weight during the start of calving season.

“We manage our winter stockpile so that in March and into the first week of April we always have some left,” Judy explained. “When the cows grab a big bite of green grass, they are also getting some stockpiled dry matter. They only need about three or four bites of this to balance out the rumen.”

Although it is important for cows to maintain weight before calving, Judy’s goal is for his animals to gain weight at this time. He said this can improve a cow’s breed-back rate, alleviating the biggest expense to his operation – open cows.

Judy assesses the body condition of his cows to not only monitor their weight gain, but also to assess the prosperity of his entire grazing system. At the end of the day, Judy believes the soil feeds the forages that feed the animals, and if his soil is not healthy, neither is his herd. But after regeneratively grazing for more than 20 years, everything is healthy at Green Pastures Farm.

Be a successful adaptive grazing manager Next