Annual ryegrass is at peak production across the state of Mississippi. Although some producers are still using it for grazing, some have started cutting ryegrass for hay or baleage production. Tall fescue in the northern part of the state has received ample rain, and it is at its peak production.

Because of the weather conditions, we have seen a large increase in clover diversity in pastures that includes white, hop, red, and Persian clover. Along with the rain, it has been a very difficult time for producers to get their pastures and hayfields sprayed for weeds, especially winter annual weeds. Buttercup infestation has increased significantly this year along with henbit. Buttercup infestation on a farm in Carthage (Leake Co), Miss. 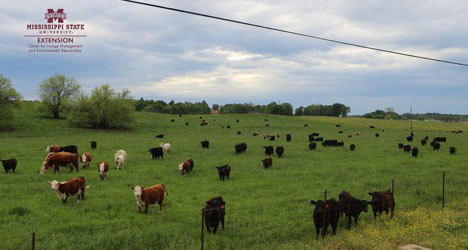 Most parts of Montana are coming out of a mild, dry winter. With little precipitation in many areas since December, large regions of the state remained open. Warmer temperatures in early spring have many farmers planting early and hoping for early harvests if summer rains are timely. Rain is expected for most parts of the state this last part of April, creating great soil moisture conditions for seeding in early May. The moisture will also benefit perennial and winter annual fields.

There have been few reports of winterkill occurring in any part of the state, and many areas entered the second half of April with several inches of growth already occurring. A significant amount of precipitation accumulated in the northern part of the state during the middle of April. Some areas reported getting over 7 inches of snow, delivering much-needed moisture, but delaying planting operations.

Weeds also came on strong with this mild weather, forcing many producers to spray or consider cultural methods of control much earlier than in previous years. Producers should be on the lookout for other pest populations to increase earlier than normal due to the near-record spring temperatures, which may lead to earlier pest cycles.

Fields started greening up by mid-April. Precipitation in April has been mixed across New England, but it has generally been dry. For the past couple weeks, farmers have been able to spread manure and put in forage seedings, especially on their better-drained soils. We’ll probably see our first corn planted by early May in the Champlain Valley and the Connecticut River Valley. So far, there hasn’t been too much grazing activity, but with some very recent rain moving through the region, that may help promote pasture growth.

It is a little too early to completely know the extent of winter injury for alfalfa and cool-season grasses. Although it was a relatively warm winter, we did not get our usual snow cover, so it is hard to predict and we’ll know more in the next couple weeks. There are reports in Vermont of winter injury to late-summer seedings, probably due to poor seedling growth from last year’s dry autumn. There are also reports from Maine of winter injury to clovers on heavier ground, especially newly seeded stands from last year.

Appreciation to Rick Kersbergen and Carl Majewski for contributions from Maine and New Hampshire.