Glenn Shewmaker
Extension Forage Specialist
University of Idaho
In most areas, second-cutting dairy hay was harvested in good shape. There have been some hot days, but average air temperature for Kimberly in June was 67.5°F, which is moderate and comfortable for cool-season crops. It has been warm enough for the corn to grow well. Kimberly only received 0.28 inch of precipitation in June; however, a thunderstorm and the associated hail that came with it on July 10 destroyed most of the crops in a mile-wide path for about 40 miles. Our family farm and one of USDA’s research farms were in the middle of the path. The University of Idaho research farm only had minor damage. I haven’t heard of any significant pest issues. 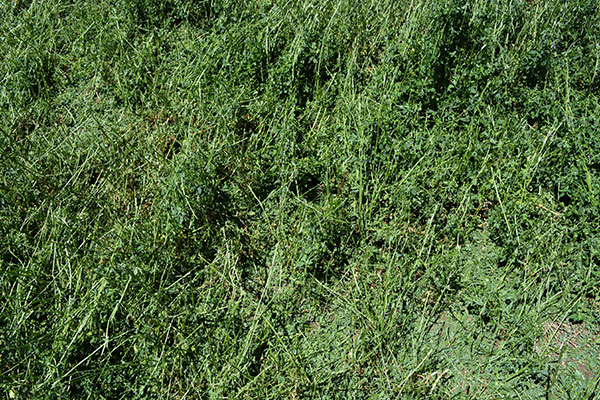 July 11: After hail and before swathing. 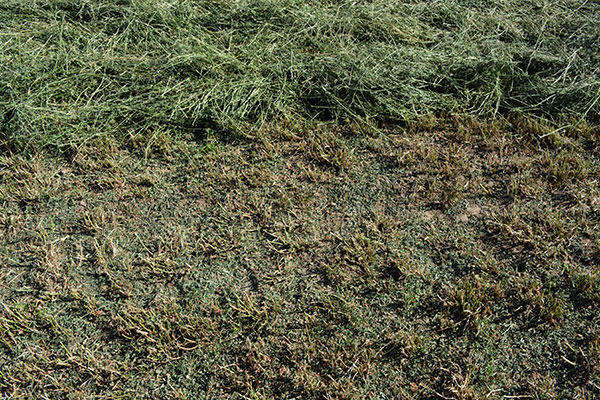 The growing conditions have been good this year. Rain has generally been timely and temperatures are running average to slightly above, resulting in high alfalfa and pasture yields. These high yields are following last year’s similar story, which resulted in more than adequate forage inventories on most farms. The Wisconsin Agricultural Statistical Service reports that the average haylage yields in Wisconsin in 2015 were about 7 tons of dry matter (DM) per acre, when the average is only about 4.2 tons of DM per acre.

With full storage facilities, a question that is becoming more common is: What would happen if I simply quit harvesting forage this year? The answer is that little will happen to alfalfa stands. They will grow, flower, and a second set of stems may come through later. This “residue” can be left through the winter and will actually help winter survival and next year’s yield.

Grass stands or alfalfa fields with over 50 percent grass should at least be harvested late this year (October). The regrowth of cool-season grasses is primarily leaves. The quality will remain high, but they will lay flat in the fall under snow, unlike alfalfa. This mat can be a good place for snow mold to grow and may kill areas in the grass stand. Removing forage late, by either haying or grazing, reduces the potential for this problem.

Potato leafhopper and other insect problems have been light this year.

It is a buggy period in the Empire State. Alfalfa weevils and potato leafhoppers are in alfalfa, soybean aphids are far over threshold in some soybean fields, and Japanese beetles are attacking corn and soybeans in central New York. A majority of the state remains abnormally dry with western New York most affected. While showers and thunderstorms last week helped, they were spotty (ranging from less than 1/2 inch to just over 1 inch), and in most locations it wasn’t enough to significantly improve crop conditions. Stream flows are at near-record lows.

Corn and soybeans have tolerated the dry weather fairly well so far, but corn is entering a critical growth stage and is in need of a significant rain. Alfalfa looks surprisingly well in spite of the dry weather, and forage quality is very good thanks to some excellent haymaking weather. However, there are an unusually high number of seeding failures due to various reasons. Between the heat and drought conditions, this is a terrible year for grass-based forage operations. First-cut grass yields were generally poor, and second cut is somewhere between poor and nonexistent.