The haymaking season is marching along without anything too remarkable. Conditions are fairly "normal" for this time of year. Fortunately, haymaking conditions have been very good, and we have not had many summer thunderstorms that result in rain-damaged hay.

As noted in an earlier report, many growers started cutting earlier this year because of market conditions and the demand for high-quality alfalfa coupled with fewer and less severe spring frosts, which gave alfalfa an earlier start. Therefore, many fields are on schedule for four cuttings and some fields may even be cut five times — something that is unheard of for the intermountain area of northern California and southern Oregon.

Overall, temperatures have been relatively mild this summer, and most areas have seen few or no days in the high 90s to low 100s. This has been favorable for yield of both alfalfa and cool-season perennial grasses and has helped growers keep up with the crops' irrigation needs. 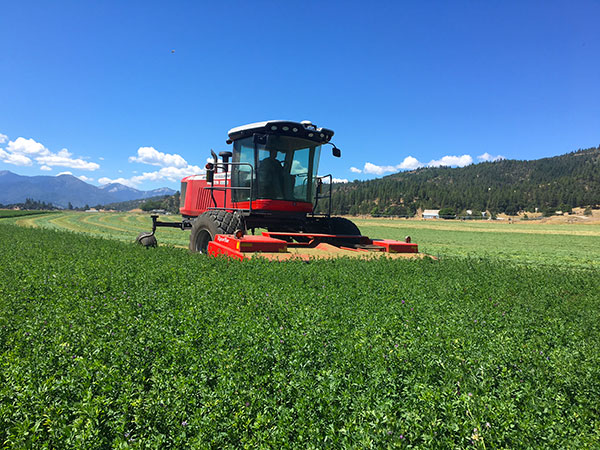 As we go into the month of August, South Dakota continues to face dryer than normal conditions for the growing season. The northeast and west region (Black Hills) of the state are struggling with insufficient moisture, forcing producers to find alternative forages and the regional hay market might face a difficult time. Rain across much of eastern South Dakota last week brought some temporary relief to producers; however, many acres of third cutting was down and got rained on, which is perfect for creating mold problems. Producers are considering a fourth cutting depending on moisture and temperatures.

Nitrates in feed supplies and how they will affect livestock feeding operations is also a concern. It is well known that certain plants are nitrate accumulators and can contain toxic levels of nitrate when consumed by cattle and sheep. Some examples include small grains, corn, sudangrass, sorghum, millet, bromegrass, orchardgrass, tall fescue, alfalfa, and sweet clover.

South Dakota State University-Extension recommends testing for nitrates. Most of the preliminary testing can be done at any SDSU Extension Regional Center using a “nitrate quick test kit.” However, this test will only recognize the presence or absence of nitrates in plants. In order to see and understand the actual levels of nitrates, samples should be sent to a private laboratory. See a list of labs at https://igrow.org/up/resources/02-1000-2015.pdf.

Michigan has areas where crops look excellent due to timely rain showers, and then there are areas where the hot, dry weather has made our crops look like a dormant lawn. Parts of the state are labeled as being in extreme drought and have had about 1.5 inches of rain since the middle of May. Other parts of Michigan have had near normal rainfalls and crop yields. Pasture regrowth in the dry areas has been limited and cow-calf operators have been feeding supplemental.

Even with the dry weather and average to below average yields for forages, supplies are not as tight as in 2012 due to strong carryover inventories. Hay auctions have some old crop being sold to make room for new crop supplies. Also, the surrounding states have adequate supplies, so producers do not seem concerned.

Overall, the quality of the alfalfa crop has been excellent for both dry hay and haylage.

The corn crop is ahead of schedule due to the increased GDDs, and silage growers are expecting to be in the field at least one to two weeks earlier than normal.