Temperatures over the last several weeks have been above average in the San Joaquin Valley. It’s not widely common, but there are some fields of triple-cropped corn and sorghum recently emerged through stubble of earlier chopped corn. Other fields have been planted to sudangrass.

In most harvested cornfields, manure spreaders and disks are chasing each other, incorporating organic matter and prepping the field for fall-planted small grains or alfalfa. Sorghum forage harvest has been underway and most stands are at least heading. Otherwise, sorghum, sudangrass, and corn can still be found growing at various stages. Alfalfa cutting, baling, and stacking are still progressing. There have been visible flights of alfalfa caterpillar adult moths, but it’s not clear yet if there are notable larval infestations.

In Southern California, we’re seeing a common forage problem during summer in the low desert called “summer scalding.” Summer scalding is the killing or reduced growth of plants due to too much water, particularly during hot summer days. Summer scalding is very common on alfalfa (see picture) but also happens to other low desert forage crops, including bermudagrass, sudangrass, kleingrass, and the newly introduced rhodesgrass (under trial). It commonly occurs at the end of fields where water collects and stands for hours after irrigation has ended and the maximum air temperature is greater than 90°F. Under such conditions, crop roots suffocate due to lack of oxygen and results in reduced growth, lower yield, and poor-quality hay. Summer scalding in the low desert usually begins in July and continues throughout the summer season when maximum daily temperatures exceed 90°F. 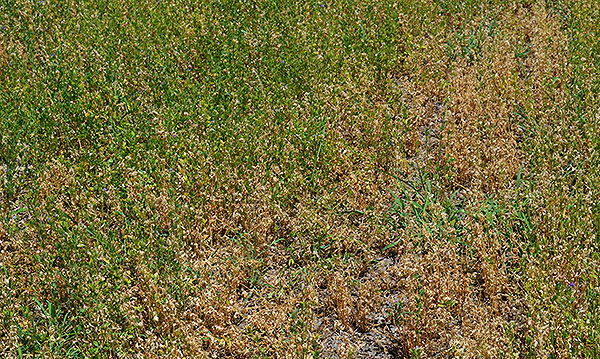 In Missouri, the summer of 2016 is shaping up to be the summer that never was. Day and night temperatures have been milder than normal, and the summer ended up being warm instead of hot. Precipitation events were frequent and evenly spaced. As a result, the cool-season grasses did not enter dormancy. In fact, they did not even become semidormant, which is uncommon for Missouri.

Our cattlemen are going into the fall and winter with an ample supply of hay. However, nearly all of the hay is fully mature, endophyte-infected Kentucky 31. It will, therefore, contain high amounts of nondigestible fiber and ergot alkaloids, creating the worst of worlds in both nutrition and toxicosis. We are encouraging our cattlemen to consider ammoniation of their low-quality hay, which will increase digestibility and degrade ergot alkaloids.

Over the past month in southern Missouri, fall armyworms have been infesting bermudagrass pastures, and yellowstriped armyworms have been infesting alfalfa fields. In some fields, the majority of alfalfa crowns have been decimated. Producers are planning to thicken up these stands by drilling 10 pounds of alfalfa seed per acre in fields that were planted this spring. For older stands, producers are considering drilling wheat or another winter annual before replanting alfalfa.

Several of our producers have already begun their fall seeding, which is one week to 10 days early. These producers anticipate plenty of rainfall and favorable temperatures. We are eager to see how these stands emerge and develop over the next month.

Much needed rainfall hit many areas of Georgia over the course of the last 10 days, though some isolated areas have still had no appreciable moisture. Even where substantial rains fell, many challenges remain.

The theme of the last month has been insect control. Severe outbreaks of fall armyworm have been reported throughout Georgia. Many producers had their hopes of cutting a significant hay crop dashed because the fall armyworms mowed the field before they had the chance. In one of the cruelest ironies that can afflict a forage producer, many hayfields freshly resurrected from drought were cut to prevent the fall armyworms from taking them, only to have the crop rained on because the weatherman changed his forecast.

Those who sprayed hayfields for armyworms found the silver lining, as that not only protected their crop from the fall armyworm, but it also kept bermudagrass stem maggot damage at bay. Still, reports of bermudagrass stem maggot injury have been received from virtually all areas south of I-20, with sporadic reports from far north Georgia. Forage sorghum and sorghum x sudangrass plantings have all been subjected to high levels of sugarcane aphid pressure practically everywhere in the state.