Farmers often boost corn plant densities as a means to maximize forage yields or replenish silage stocks. In the past few years, our team at Virginia Tech has performed several on-farm plant density research projects to evaluate the impact of changing plant densities on forage yield and quality.

Here are some of our results, which elicit a number of considerations when changing corn planting rates.

There is a balance between the number of plants and the weight of the individual plants. This balance, which determines the existence of differential forage yields, is “broken” depending on maturity at harvesting. Based on observations from our studies, when a crop is harvested at early stages of maturity (namely early dent or close to 70 percent moisture), a greater number of plants cannot compensate for the smaller weight of the individual plants. Therefore, silage yield is similar.

When a crop is harvested at a more advanced maturity (half-milkline or closer to 65 percent moisture), the larger plant has more grain weight, leading to a yield advantage for higher plant densities. If the forage grower is planning an early harvest of the corn crop, then raising the population of plants to maximize forage yield might not be beneficial. 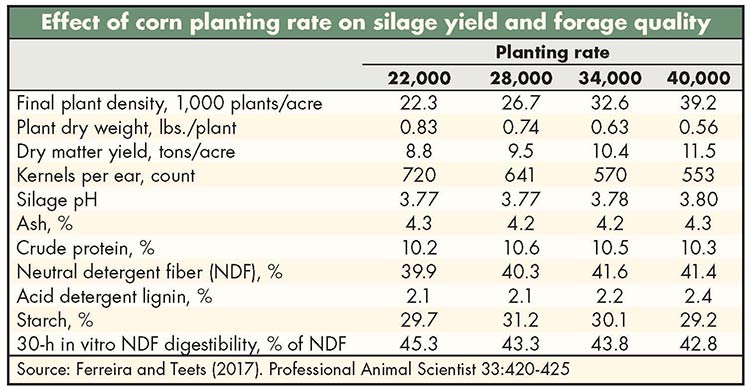 Kernel development is a determinant of forage yield and quality, so having a reduction in the number of kernels per plant does not seem very appealing to the farmer. However, we still need to consider that there are more plants per acre at higher planting densities, which typically translates into greater yields of grain and possibly starch. Therefore, don’t base you opinion of potential silage yield and quality on the appearance of the ears.

Despite several recent studies evaluating the effect of plant density on forage yield and quality, only a few have evaluated its interaction with fertilizer management strategies. Our research team performed an on-farm study in southwest Virginia last summer (2017) where corn was planted at three densities (26,000, 30,000, or 35,000 plants or acre) with either a single (45 pounds per acre) or double (90 pounds per acre) pass of nitrogen right before elongation of the internodes. To our surprise, doubling the sidedressed nitrogen raised the forage yield by only 5 percent.

It is worth to mentioning that a very severe drought around silking time was observed during the summer in southwest Virginia. This may have masked any beneficial effects of additional nitrogen fertilization on forage yields. Despite the severe drought, the higher planting rates did not result in lower forage yields. We are still analyzing the samples for nutritional quality so stay tuned for future updates.

This article appeared in the February 2018 issue of Hay & Forage Grower on page 24.

Regional cultures vary — so does forage quality Next