Harvest of winter small grain forage is finished, and there are only a few fields left to stack bales. Alfalfa fields may be on their fifth cuttings for those growers on very rigorous harvest cycles. With this past month of above normal temperatures, exceeding triple digits last week, this season has so far turned out to be ideal for early growing conditions as well as picture perfect for curing hay in the field. This week was much cooler than average with no effective precipitation and temperatures expected to soar back over the triple digit mark, a short-lived relief from the drying soil conditions in the San Joaquin Valley.

Although the last month has been dry compared to the previous, and we’ve seen zero effective precipitation, surface water allocations are slightly higher than last year. Thus, many growers have switched back to corn rather than plant sorghum. Yet, there is a contingency of growers keeping the Old World grain in their repertoire. Those who are still managing low water availability or quality, or where they simply like the crop, sorghum has been planted and we’re seeing good emergence and early growth.

Corn is still going in the ground, so a quick drive down any road amidst San Joaquin Valley farmland will quickly reveal the sight of corn in VE (emerging) on one side and VT to R2 (pollinating) on the other side. For those who planted corn early, the water is really running now to protect their yields in this sensitive, late vegetative/early reproductive growing stage during the above average heat spell we are experiencing. In conjunction with this early heat wave, late planted corn in manured fields may be challenged with ammonia burn or salt injury, but first irrigations with fresh water should alleviate the stress by pushing down salts below the young root zones. 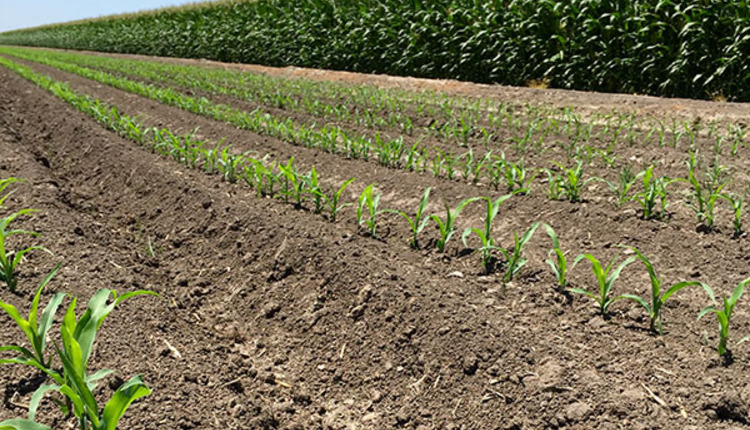 After a cool spring with moderate precipitation, cool-season grass developed a “glaze” in their seedheads. The glaze is likely honeydew, a sucrose solution produced by the fungus (Claviceps purpurea). Honeydew contains spores and attracts insects, which provides a vehicle for spreading spores in cool, moist weather conditions. In dry conditions, Claviceps depends on wind for spreading spores.

University Extension issued a BOLO (“be on the lookout”) for sclerotia; that is, for ergot bodies that form in the seedheads. Two weeks later, the second week of June, reports began coming in for moderate to severe ergot infestation. One producer quantified the proportion of infected seedheads as 6 to 7 percent. It will be mid-July before we can determine the extent of the ergot infestation in our state.

Regarding hay production, many grass pastures have recently been cut for hay. Nearly all of these pastures contain fully mature plants of endophyte-infected Kentucky 31 tall fescue. This hay will be low in nutritive value, as expected from mature hay. It will also be highly toxic, as the endophyte-infected seedheads contain the highest concentrations of toxic alkaloids.

A few cattlemen were able to cut their grass pastures during favorable conditions in May; those who did so are now getting their second cutting. Some of these fields are novel endophytes, which will produce high-quality, nontoxic hay.

Many Missouri cattlemen have been cutting their tall fescue for seed, a by-product from the pasture. Tall fescue seed yields are expected to be average this year.

The summer routine is in full swing. The first cutting of bermudagrass has been baled throughout most of the state, and producers in southern Georgia are beginning to make their second cutting. The heat and humidity have become intense and the pop-up summer showers have been hit or miss across the state. Southeastern Georgia has generally maintained fair soil moisture, but the other three corners of the state have missed many rains.

On the bright side, this weather has allowed good haymaking weather, if one had enough growth to cut. Unfortunately, some producers have already had to begin feeding hay. Those who wisely planted summer annual pastures have found this forage faring quite well in the drought. The silage corn crop is going strong and progressing toward a good harvest in the next three to four weeks.

Bermudagrass stem maggot damage is beginning to be seen across the southern one-third of the state. So far, levels have not yet been treatable in most cases. However, preventative insecticide applications seven to 10 days after cutting should be considered if more than 10 percent of stems were damaged at the time of this second bermudagrass cutting.