Producers across the state have been battling excessive heat and variable rain. Temperatures are soaring from mid-90°F to 100°F with a heat index above 110°F. This caused heat alerts for cattle in the last week of July and early August. Variable rain patterns have been favorable for the central and southeastern corners of the state. The southwest and northwest corners are abnormally dry with about a 10 to 30 percent hay production loss in July. Although the weather has been optimum for making hay, it is also been delaying nitrogen applications due to the lack of soil moisture.

In three weeks, producers will begin preparing ground to plant annual ryegrass and tall fescue in the fall. Producers who are preparing their land for annual ryegrass should avoid planting too early where “blast” disease can kill the stand due to climatic conditions. Planting close to September 15 may prevent the need for replanting. Keep in mind that planting annual ryegrass has a high cost and the investment needs to be protected.

Armyworm infestations are widespread across the state. Also, some cases of chinch bugs and grasshoppers have been reported in hayfields. 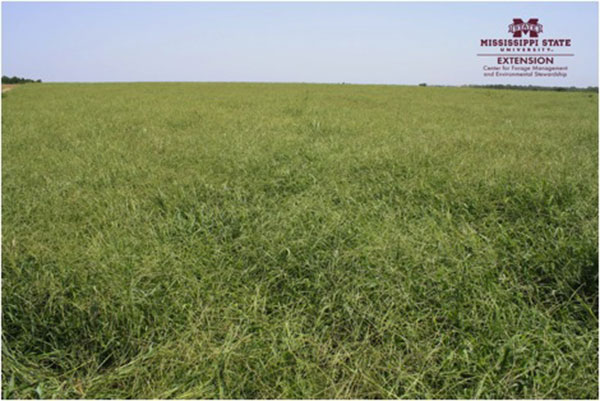 Extremely hot and dry weather throughout the majority of the state has been an issue for those hoping to get a second cutting this season. In southeastern Montana, even after the high rainfall this spring, many producers didn’t get their swathers out to harvest hay this summer. Luckily, many were able to put up an early first harvest this year, which should help get a second harvest for fields under irrigation.

Weevils and aphids did not help the alfalfa hay situation, as there appeared to be a growth in populations this year. Additionally, areas of northern Montana along the Hi-Line experienced severe hailstorms toward the end of the month, preventing some from harvesting cereal forage and grain crops.

However, all is not doom and gloom. Weather is predicted to cool off for most of the month. Also, many have baled up their wheat due to low wheat prices, adding to the amount of hay still available on the market. Acres of alternative crops available for harvesting and grazing are up as well, which many can use for late-season and fall grazing.

We continue to see hot, dry weather in Vermont through the summer. Scattered and timely rain showers have helped, but not enough to catch up our deficits. As of the end of last week, our accumulated precipitation ranged from normal in a few areas to minus 8 inches throughout the state.

Second-cut grass hay yields were down and regrowth has been slow. However, timely rains have allowed some farms in the Champlain Valley to get a third harvest already. As expected in a dry year, regrowth of alfalfa has looked better than the grass hay crops. Hot weather has promoted early maturity of the alfalfa, with many fields going into bloom for this third harvest.

Pasture growth has been slow but varied. Many livestock farmers are now feeding their winter supplies of hay. A few are selling stock. Pasture-based dairies that planted summer annuals as a supplement are seeing that benefit.

Many cornfields are shorter than normal and showing signs of stress from the extended dry summer. There has been just enough moisture, though, so not to impede pollination. We really need some significant, steady rain if we are going to have a productive August and September.