By Jane Caldwell
The author is the director of research and development for TransAgra International, Storm Lake, Iowa. 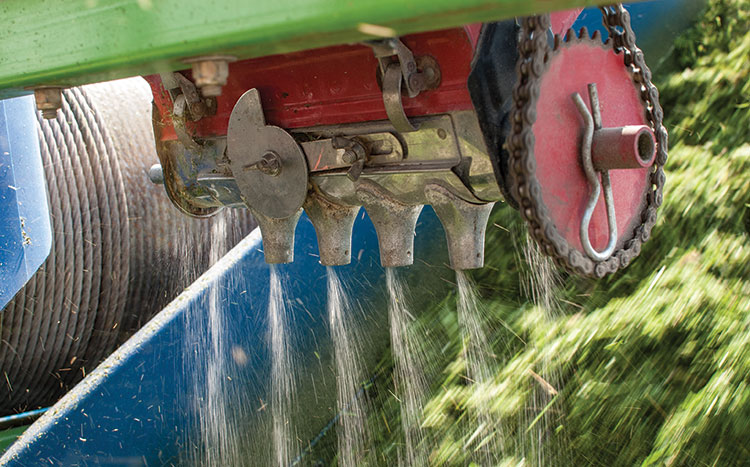 Silage production is a competition. While the crop stands, its native microorganisms, or epiphytes, live in a low-growth, maintenance-only state of starvation. The stopwatch begins the minute the crop is cut, when plant cells are disrupted and nutrients are released.

Epiphytes such as bacteria (good and bad), yeasts, and molds all compete for those precious sugars and proteins. Fortunately, the beneficial lactic acid-producing bacteria (LABs) are top-notch competitors. Scientists have reported that LABs are outnumbered on standing crops by bad bacteria, molds, and yeasts by a factor of 1,000. Despite these overwhelming odds, LABs can usually overtake the others. Here’s why:

LABs such as Lactobacillus species have undergone genome shrinkage; the genome being the complete set of DNA needed to build and maintain the organism. This means they’ve lost nonessential DNA and nutrient production pathways. They have evolved to co-exist with their hosts or food sources, such as plant surfaces and the animal gut. The DNA they have lost during shrinkage was formerly used to make nutrients de novo. Now, instead of using time and energy to make food from scratch, they import the intact nutrients from the outside world.

To achieve this, LABs have ramped up transport systems that scavenge their host environment for food. Furthermore, they have lost DNA in their genomes, so they are smaller and can divide more quickly. They manage to outpace other bacteria, molds, or yeasts that have larger, unwieldy genomes.

LABs are lean and mean growing machines. When you chop alfalfa, corn, or grasses, the LABs quickly transport plant nutrients into their own cells, which spur growth. Other microorganisms make their nutrients from scratch or have slower transport systems. Because LABs can grab the nutrients more efficiently, they leave the starvation state sooner. This means the LABs have a shorter lag time transitioning from maintenance to growth, which allows them to rapidly double and grow exponentially.

The competitors such as Clostridia, Enterococcus, yeasts, and molds are left in the dust and literally have their lunch eaten by LABs. Adequate chopping of forage releases sugars, proteins, water, and other nutrients needed for LAB growth. Furthermore, fungi or molds require oxygen to grow. LABs can grow in oxygen, but most prefer to grow without it. The sooner the forage grower can eliminate oxygen, the sooner the LABs can dominate their undesirable competitors.

To further outpace the competition, LABs also excrete lactic acid, hydrogen peroxide, and bacteriocins — all compounds which inhibit other micro competitors. LABs themselves are acid tolerant. When they produce lactic acid from water-soluble carbohydrates (sugars) in the forage, they inhibit or destroy their nonacid-tolerant competitors through chemical warfare. Ditto for hydrogen peroxide. Bacteriocins are specialized chemicals that kill pathogens or other closely related bacteria, Lactobacillus cousins if you will, by punching holes in their cell walls.

In nature, nothing goes to waste. The bodies of the destroyed are consumed by the surviving LABs. They have their lunch eaten by the LABs, and they are lunch for the LABs.

Forages, such as alfalfa, which have higher protein content, are more difficult to ensile due to greater buffering capacity. Buffering capacity is the ability of a substance to resist changes in pH, even when strong acids or bases are added. Many proteins are charged, having positive or negative ends, making acidification by LABs more difficult. The lactic acid produced is neutralized by the proteins; the negative protein and the positive acid charges cancelling each other out.

Forage sugars, such as water-soluble carbohydrates stored in the stem, are a great, readily available source of energy for LABs. Sugars are converted to lactic acid to rapidly drop the pH of the forage and inhibit undesirables. Where natural plant sugar content is low, sugars such as molasses and lactose can be added to aid in LAB growth.

Native forage LABs exhibit superb growth due to genome shrinkage, excellent nutrient transport systems, acid tolerance, release of acids and other inhibiting chemicals, cannibalism of other dead microorganisms, and ability to grow without oxygen. Naturally occurring LABs have evolved to be our partners in food and forage preservation.

This article appeared in the August/September 2016 issue of Hay & Forage Grower on page 32.