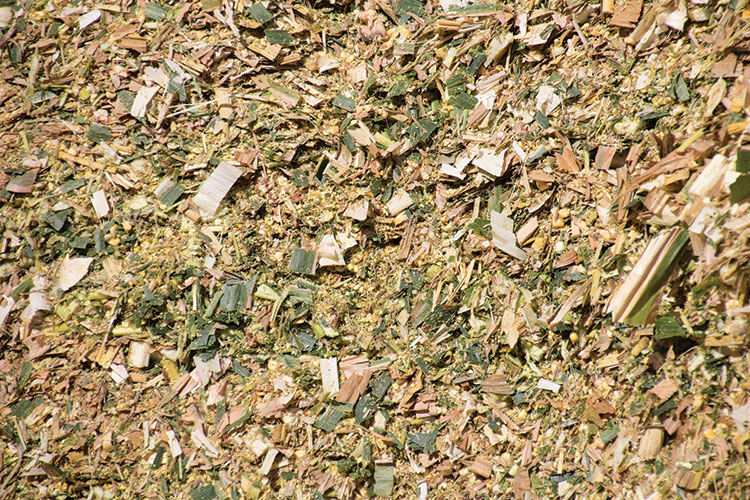 Fermentation is a biochemical reaction accomplished by bacteria as they consume the plant sugars and oxygen. They then convert those nutrients into acids, and once an anaerobic environment has been achieved, prevent the remaining organic material from further decay.

With the ensiling of corn and hay crops, the desired fermentation end product is lactic acid. The more lactic acid produced in a silo or bunk of silage, the more stable and less prone to spoilage the plant material will be.
The forage moisture level at the time of harvesting has the single largest impact on fermentation outcome. Water is the medium in which the carbohydrates (starches and sugars) feed the lactic acid producing bacteria.
Oxygen is the enemy
Acetic acid is commonly produced during fermentation along with lactic acid. Well-fermented silage will have both lactic and acetic acids present. However, excessive levels of acetic acid indicate that fermentation was slower and more dry matter was subsequently lost during the ensiling process. The environment for the fermentation remained aerobic for a longer period of time, allowing for more decomposing of organic matter. Higher levels of acetic acid indicate the pH (a measure of acidity) did not drop as rapidly as it would have had more lactic acid been produced. The lactic acid should be dominant with a ratio of about 3:1 lactic to acetic.
The prolonged presence of oxygen in a fermenting pile of forage results in the continued heating and the degradation of organic matter — and the loss of dry matter. Depending on how hot a pile gets and how long that heat continues will alter the quality of protein, making it less available in the cow’s rumen. Piles that have suffered through extensive heating will have darkened or blackened forage that has lost much of its nutrition.
In some cases, yeasts, which are in the fungus family, will interfere with proper fermentation when oxygen is available. Yeasts are everywhere in the environment and can produce molds, which can make the silage unpalatable.
Yeasts will also convert sugar to alcohol. The alcohol, which is an organic compound containing carbon, will evaporate into the air taking the carbon with it, resulting in the uncontrollable loss of dry matter. Unfortunately, the presence of yeasts in silages can destroy dry matter no matter how well a pile has been previously fermented.
Hay crops are a challenge
Achieving properly fermented haylage — grass or legume — poses a special challenge. The proper moisture levels for grass and alfalfa silages are much more critical to the development of proper fermentation. Grass and alfalfa, unlike corn, have much lower levels of the starch that is needed to support rapid lactic acid production.
The absence of adequate lactic acid results in a less acidic environment that enables the proliferation of clostridial bacteria that produce butyric acid. Silage high in butyric acid levels has a noticeably putrid smell and does not store well. It also will reduce feed intake and milk production.
Oftentimes a clostridial fermentation in haylage is accompanied by the breakdown of proteins resulting in the production of ammonia. While ammonia is necessary for the fermentation of forage in the rumen, too much will be toxic to a cow. The presence of ammonia indicates that the protein in the hay crop is being destroyed.
Know your fermentation
A fermentation analysis is a diagnostic tool that will allow us to better identify possible problems in forages that may lead to dry matter intake problems. A complete fermentation analysis provides the moisture level along with the lactic, acetic, and butyric acid levels. Knowing the levels of these acids gives us a good idea of the type and degree of fermentation that has occurred. The ammonia level is another indicator of how well the silage has fermented.
Forage evaluation data compiled by Cumberland Valley Analytical Services in Maugansville, Md., has shown that dry matters below 28 percent are associated with much higher levels of butyric acid as well as ammonia levels approaching 30 percent of the total available nitrogen in the forage.
Target the corn silage dry matter to be around 30 to 35 percent, allowing for the optimal lactic and acetic acid profile. For hay crops, shoot for dry matter levels in the 35 to 40 percent range. Always include a silage inoculant to increase bacteria levels that will accelerate oxygen scavenging.
Fermentation analysis is a tool that will assist a nutritionist or dairy farmer in evaluating if a forage has been ensiled properly. The type and degree of fermentation will affect the dry matter recovery and also provide us with valuable information as to how we formulate the rest of the feed ration around the silage.

This article appeared in the August/September 2016 issue of Hay & Forage Grower on page 36.

More fuel for the BMR corn silage debate Next