The author is a pasture and range consultant for the Samuel Roberts Noble Foundation. 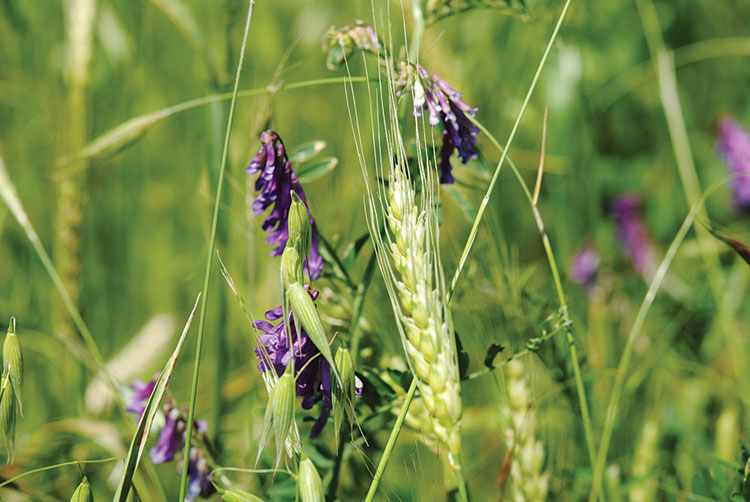 Vetch, oats, and wheat comprise this cool-season cover crop.
For more than a decade, a movement has been taking the agriculture industry by storm. That movement is called soil health. This movement was not born in a laboratory nor by legislation. It was born by farmers and ranchers who wanted to do things differently.

Sixty years ago, the agriculture industry was operating on cheap feed, cheap fertilizer, and cheap fuel. Our industry and our science during that time period focused on the chemical and physical characteristics of soils with little to no consideration of soil biological interactions. During this period, the prices of feed, fertilizer, and fuel eventually elevated to the point at which they became unsustainable for many operations. Some farmers had to make a choice, continue doing what was always done or find new ways to farm.

Born out of equal parts necessity and frustration, some farmers began to experiment with farming techniques that limited the use of inorganic fertilizer, fuel, and feed. They began to see that limiting or eliminating tillage reduced their fuel bill and using an ageless practice, “cover crops,” began to keep the ground covered and provided numerous benefits to the soil. What they were doing, in essence, was building a foundation of principles that we follow today to manage healthy soils.

These soil health principles were set forth to achieve specific goals that are inherent to all soils. They are based on harnessing the power of biologic interactions between plants, soil microbes, fungi, and all other soil life. These principles build soil aggregation, which further builds structure. The implemented practices have proven the path forward for many progressive farmers and substantiated that conventional farming is not the only way. The following soil health building principles were developed by farmers, for farmers.

Cover crops are commonly utilized in agronomic systems to meet several goals, such as keeping the ground covered and adding biological diversity. Cover crops are an incredible tool. They can be utilized to directly or indirectly meet any and/or all of the five soil health principles.

Many producers have been utilizing mixed-species cover crops in cropland and pasture systems to improve plant diversity, raise soil organic matter, enhance soil microbiological function, and so forth. However, with that said, you will notice that simply planting cover crops is not one of the principles. Cover crops are facilitators. They facilitate the farmer’s ability to follow the soil health principles.

Managing the type, timing, and use of cover crops is crucially important to the success of the principles. The crop type, seasonality, and longevity of cover crops planted correlates directly to the third and fourth principles — enhancing crop diversity and keeping living roots in the ground. Utilizing the cover crop for secondary purposes has become a source of considerable concern and opportunity. Whether the cover crop is terminated, grazed, or harvested, influences the outcomes of essentially all of the principles.

For instance, many progressive producers have added livestock grazing of these crops for the additional benefits of animal impact and distribution of urine and manure. Once livestock grazing is introduced, these are no longer traditional cover crops with the sole purpose of improving the soil. They are now mixed-species, dual-purpose forage crops.

In order to receive the soil health benefits and follow the principles, grazing these mixed-species forage crops should be managed to leave proper residue amounts in contrast to being completely grazed out. Grazing these crops recycles the majority of their nutrients, while haying and/or cutting cover crops for silage defeats the purpose of trying to add organic matter.

Grazing mixed-species forage crops can be very useful and can add flexibility in animal production systems. However, the focus should be on addressing the soil health concern that prompted planting the cover crop in the first place; subsequent benefits should be secondary, if the goal is to build soil health.

The cover crop craze has come with the soil health movement. Cover crops, although a great tool and facilitator, are not a silver bullet. Simply planting cover crops does not ensure healthy soils. Applying proper and timely management following the soil health principles is the path to ensure that outcome.

This article appeared in the February 2017 issue of Hay & Forage Grower on page 16.

Dealing with dryland saline and sodic soils Next

A ruminant growth promoter you can grow Previous