What’s wrong with this silage? 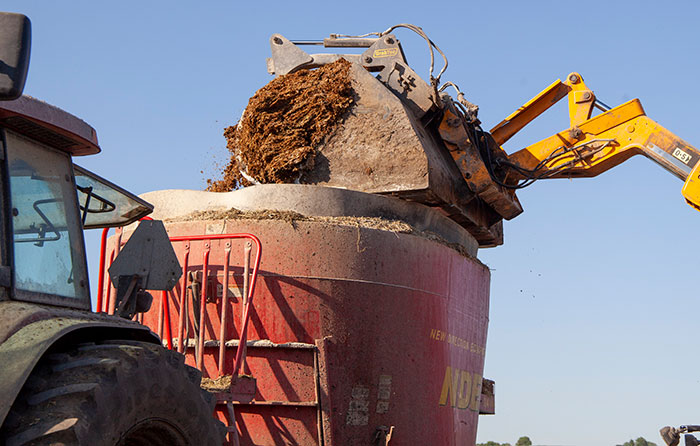 The scenario is a common one: The cows aren’t eating a new batch of silage and performance is down. It may simply be a forage quality or moisture issue, or it may be “something else.” Finding that something else isn’t always easy, but a good place to start is a fermentation profile analysis.

“A silage fermentation analysis from a lab will tell you what went on during fermentation about 98 percent of the time,” said Limin Kung, professor of animal science at the University of Delaware. The well-known silage and ruminant nutrition expert recently addressed the interpretation of silage fermentation profiles at the Penn State Dairy Nutrition Conference held in Harrisburg, Pa.

Kung explained that homofermentative, lactic acid-producing bacteria are added to a fresh-chopped crop so that they can dominate the fermentation and preserve both dry matter and energy. In this type of fermentation, unlike more undesirable fermentations, carbon isn’t lost as carbon dioxide, which preserves dry matter.

“That saved carbon is incorporated into beneficial end products, which are utilized by the cow,” Kung noted.

Inoculating silages with homolactic bacteria generally result in higher levels of lactic acid and a slightly lower pH. Acetic acid levels will also be lower than uninoculated silages. Kung explained that ethanol levels could be lower, the same, or higher than uninoculated silage. If it is higher, and if acetic acid levels are low, it’s possible that ethanol-producing yeast might have been active.

“Once silage is exposed to air, the system blows up and becomes destabilized,” Kung explained. “Yeasts begin to take over and the silage heats; at that point, the end product profile changes dramatically as energy and dry matter are lost. This is why people add Lactobacillus buchneri, which makes some acetic acid at the expense of lactic acid. The tradeoff is better aerobic stability because acetic acid has good antifungal (yeasts and molds) activity. You will also likely see some 1,2-propanediol show up on fermentation analysis where L. buchneri was used,” he added.

The utility of a fermentation profile analysis is that you can ascertain exactly what drove the fermentation. Kung offered several examples as follows:

High acetate: Typical of a fermentation dominated by enterobacteria and heterolactic fermentation, making lactate, acetate, and ethanol. This might be what you’d see in uninoculated silage.

High butyrate or propionate: This is most likely caused by a clostridial fermentation.

“We want fermentations to be as fast as possible to save the energy and dry matter in the system,” Kung said. “The end products from silage fermentation are important because they’re also feeding the cow. Lactic acid, for example, would convert to propionic acid in the rumen, which is then absorbed through the rumen wall and goes to the liver where it is ultimately made into glucose (energy) for physiologic functions such as making milk. Acetic acid, on the other hand, is an important precursor of milkfat.”

Kung noted that corn silage moisture has a profound impact on the fermentation analysis.

“For wetter silages, fermentation is more rapid,” Kung said. “A dry silage will have a slower pH drop and the extent of fermentation is not as great. In a dry silage, the bacteria run out of metabolic moisture. Two samples from the same crop in the same field could have very different fermentation analyses just because of a differential in moisture.

“If I had to error, I’d rather do it on the wetter side than the drier side. With silages that are too dry, we run into more packing issues, poor fermentations, more ethanol problems, higher dry matter losses, and in corn silage, starch digestibility becomes a problem,” he explained.

The silage expert emphasized that the whole goal in avoiding fermentation train wrecks is through compromise. “We try to stay away from the high- and low-moisture extremes if at all possible.”

Alfalfa is very different from corn silage in terms of its fermentation ability. It has a high buffering capacity (resists pH change). This makes wetter alfalfa silages at risk for clostridial fermentation, especially if excess soil is introduced.

Kung emphasized that clostridia fermentation will also occur if the haylage is low in sugar (for example, as might be the case for excessively rained-on hay).

No fermentation is the same, and the consequences of a poor fermentation can be severe when feeding livestock for optimum production. Although testing for forage quality is a common practice, it might also be wise to annually submit samples of silage and haylage for a fermentation profile analysis.