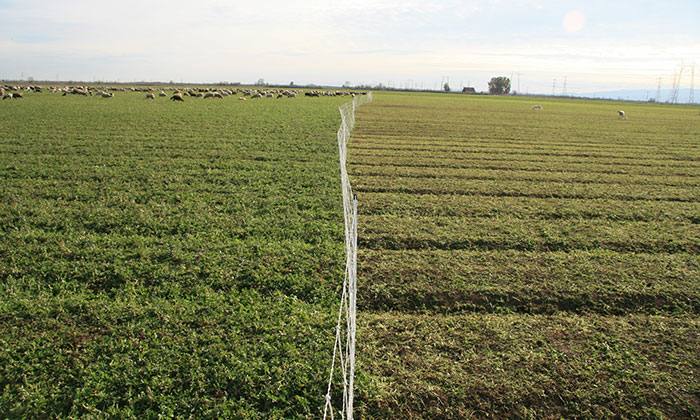 What fits one production system or environment doesn’t always fit another. Grazing alfalfa in the fall and winter with sheep is one such practice.

In many regions, alfalfa growers desire to leave fall regrowth on the field during winter to help thwart off risks of winterkill by catching additional snow cover and moderating soil temperatures.

Such is not the case in some parts of the West.

In California, grazing sheep on alfalfa fields during the fall and winter is a common practice in regions where both enterprises exist.

The alfalfa provides high-quality feed during a time when ewes are typically lambing and other forage sources are scarce.

Grazing the dormant alfalfa benefits the alfalfa in several ways. The sheep, which are less prone to causing hoof damage than cattle, graze on winter weeds and reduce their presence in spring alfalfa regrowth. They also eat the alfalfa stems that harbor weevil eggs, reducing pressure from that insect in the spring.

By grazing off the fall aftermath growth, sheep also remove winter cover where meadow voles and gophers can hide from predators. Rodent damage can be extensive to alfalfa fields when populations are allowed to build.

University of California Extension specialists recommend to guard against grazing too early in the fall or too late in the spring. If the alfalfa is lush and actively growing, this enhances the risk for animal bloat. This is why sheeping off alfalfa is usually done during the winter months.

If bloat is a concern, don’t let sheep enter the fields when they are hungry. Fill them up on dry hay first. Let the animals adapt to the new feedstuff over a period of time.

In most situations, sheep producers establish enclosed paddocks within alfalfa fields using temporary fencing or netting. The animals are then moved frequently to maintain uniform grazing and prevent overgrazing and soil compaction.