By Alan Franzluebbers
The author is a research ecologist with the USDA-Agricultural Research Service in Raleigh, N.C. 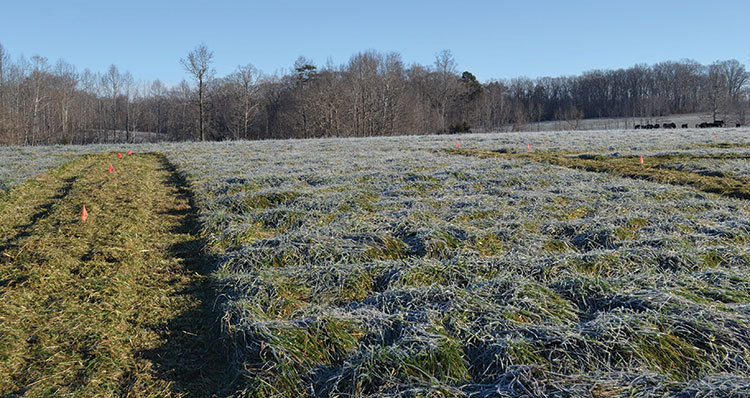 Nitrogen is the essential element of protein in plant and animal tissues. Protein is needed in a variety of molecules for organisms to function effectively, such as enzymes and DNA. In all plants, nitrogen is the most important element in the formation and function of chlorophyll, the essential compound necessary for photosynthesis. Without carbon dioxide fixation from the atmosphere via chlorophyll, animals would not exist, and we would have no food from either plants or animals.

So, maybe we should just apply more than enough nitrogen on our forages, and there would be no such limitation for this important nutrient. That could work, but nitrogen is expensive and many of our water quality issues exist because there has been too much nitrogen leaking into groundwater or running off into surface waters and causing environmental disasters.

We shouldn’t poison ourselves just to produce food to eat, should we?

The dilemma with nitrogen is determining how much to apply to be sufficient without causing environmental and economic losses. Of course, there are many other important questions, too — When is the best time to apply nitrogen to get the best plant utilization and least loss to the environment? What form of nitrogen is the most cost effective and will give us the best efficiency of plant uptake? Where in the canopy or soil profile should the nitrogen be applied to avoid losses from leaching, volatilization, and denitrification?

If your hay or forage crop had

2% nitrogen (N) content at harvest, and you intend to harvest 5 tons per acre each year, then it might make sense to apply at least 200 pounds per acre (10,000 pounds x 2% = 200 pounds). But, if only about 50% of the nitrogen you apply is actually taken up and utilized by the crop, perhaps 400 pounds of N per acre is what’s needed annually.

Where does that other 50% of the nitrogen go? 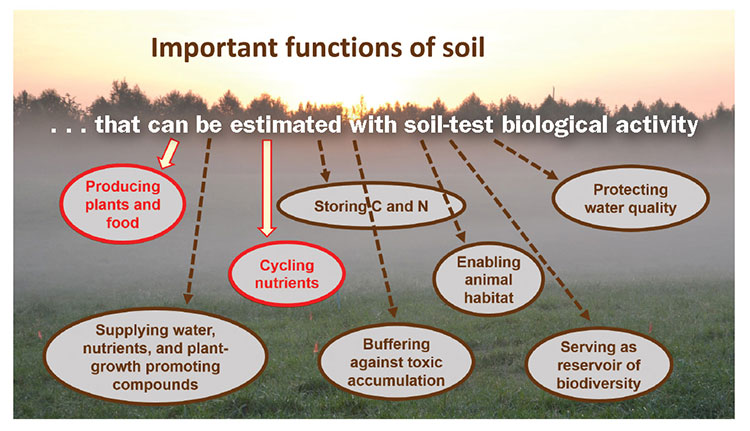 A rich source of nitrogen

So what does soil carbon have to do with protein in your grass?

We can use some of that nitrogen in the soil, but knowing how much becomes available during a growing season has been difficult to predict. Scientists studied that question more intensively before the industrial revolution that led to the development of synthetic nitrogen fertilizers. Once ammonium nitrate and urea became readily available, the emphasis on understanding nitrogen mineralization from organic matter diminished greatly.

In a series of on-farm tall fescue stockpile trials throughout North Carolina and surrounding states, the amount of nitrogen derived from mineralization of soil organic matter was compared with the amount of nitrogen supplied by urea fertilizer. Soil samples were collected at the beginning of the stockpile period (early September) and analyzed for soil nitrogen mineralization and soil-test biological activity.

Tall fescue forage was allowed to grow unimpeded for about four months into December or January, when forage growth and nutritive value were determined. Beef cows were then turned out onto these pastures as typical for this management approach.

During the experimental period, nitrogen was applied at 0, 40, 80, and 120 pounds of N per acre, and these treatments were replicated four times for a total of 16 plots at each of the 37 trials conducted in the fall of 2018. Experimental results were also available from 55 trials conducted in 2015 and 2016 using a similar approach.

Averaged across all trials, forage yield improved with higher rates of nitrogen fertilizer applied. This would not be unusual, as many current recommendations for fall stockpile forages call for 50 to 100 units of nitrogen per acre. However, what was unique about this study was that only 26 of the 92 trials had sufficient yield response to cover the cost of added nitrogen.

Sixty-six trials (72%) didn’t need any more nitrogen than what was already present in soil to optimize production. The amount of residual inorganic nitrogen in the surface 4 inches of soil was low, so the most reasonable source of available nitrogen was from mineralization of organic matter.

Why did some fields respond to fertilizer nitrogen and not others?

It was not because of the amount of residual inorganic nitrogen in the surface 4 inches of soil because there were no differences in soil ammonium and nitrate among responsive and nonresponsive fields. The difference was due to the amount of nitrogen mineralization from soil organic matter.

These results were surprising to many farmer collaborators that saw them for the first time. However, they make sense if we accept that soil health can be changed by forage and grazing management choices on farms. Soils with greater nitrogen mineralization potential have greater ability to supply plants with available nitrogen. Unfortunately, to be able to determine soil nitrogen mineralization potential in the lab requires at least two months of processing time, and it would reasonably cost about $40 per sample just for this one analysis.

Fortunately, the practical aspect of soil testing was considered at the onset of the research project. A simple, rapid, and more economical estimation of soil biological activity was also determined along with the estimation of soil nitrogen mineralization potential. 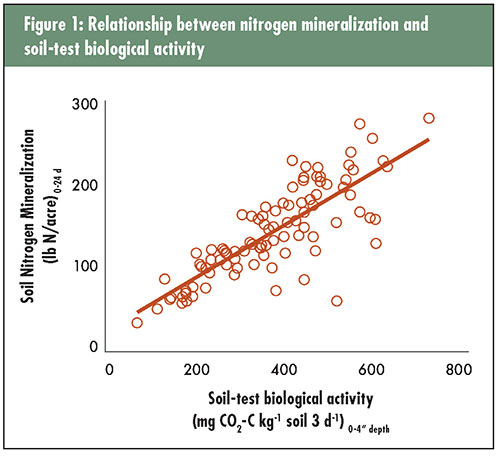 The impact of this research is that hay and forage growers can now use a soil test to determine the biological health of their soils and make reasonable, field-specific determinations of how much fertilizer nitrogen might be needed to optimize yield. This soil test would help growers fine-tune profit potential in the short term, maximize the efficiency of invested fertilizer dollars, and contribute to the health of local watersheds. Optimizing fertilizer nitrogen also reduces the carbon footprint of the farming operation by sequestering carbon in soil organic matter.

If you’d like to confirm the value of this approach on your farm, contact a soil-testing laboratory in your area to see if they offer soil biological testing. It could be in your best economic and ecological interests!