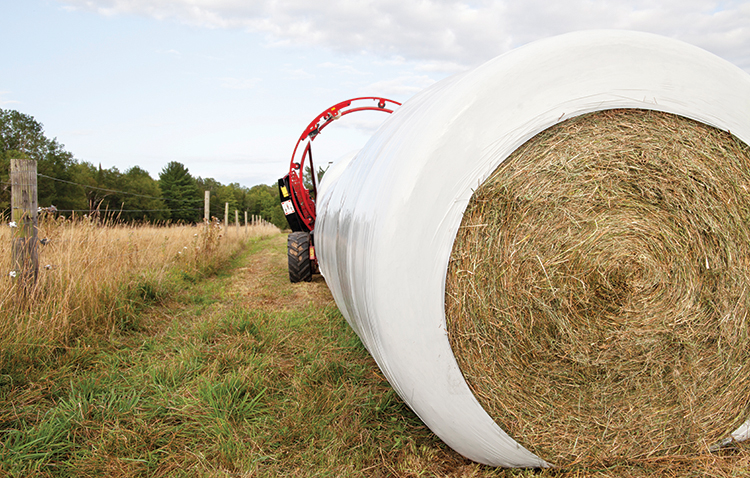 Good baleage begins with dense, uniformly sized bales.
Most farmers think their machinery salesman is just someone who wants to sell the next unit, but a good sales representative also wants to help you succeed with your operation. Admittedly, this may be a slow progression for some sales personnel, but once they realize the benefits of a “success first” approach, they never turn back.

One of the things I enjoy the most about the hay equipment business is witnessing the progression of our customers in terms of the quality of forage they are putting up. An approach we take for helping our customers improve their forage quality is simply to demonstrate the value of making a structurally sound bale. Here, I am talking about making tight, square bales that are uniform in size. This is especially important if an in-line bale wrapper is being used.

Perhaps a structurally sound, uniform bale may seem trivial if your goal is to simply maximize bales made per hour, but one of the single most important components in making good silage is proper bale density. Getting all of the oxygen out of a pile of corn silage is of the utmost importance, and the same can be said for round bales being made for baleage.

Making a good silage bale sounds simple, but as I drive down the road and see lines of bales wrapped in plastic, it is evident that this is not the case for many forage producers. I have explained in past articles about the importance of the rake in the baleage-making process, and I believe the best bales start with the raking job. For farmers making dry hay, they often try and make a large windrow that is almost as wide as the pickup. In doing so, they do not have to weave back and forth as the hay is picked up.

With baleage, the best bales are made with a smaller, moderate-sized windrow. The ability to weave just a little allows you to make sure you have adequate hay on each side, and it also ensures you don’t get the hour glass-shaped bales from wheel rakes with no hay in the middle of the windrow.

Speed is a bale density killer! The more revolutions the bale makes in the bale chamber, the tighter the bale will form. Yes, using a rotary rake helps and using knives to process the forage can take it to the next level, but if you are running 8 miles per hour (mph) while baling, you are diminishing the benefits of both. The number one thing I always recommend is a moderate-sized windrow and a baling speed of around 5 mph. Those two things will pay immediate dividends.

Use a double spear

Finally, make sure you do a good job of handling and wrapping bales. Many farmers use bale spears on their loaders. The single spear is very handy and works well, but I don’t recommend a single spear for baleage bales. With the spear being in the top half of the bale, all of the weight is pulling down on the spear and can cause an air pocket in the bale, even with a tightly formed bale. I strongly encourage producers to use a double spear handler, making it possible to lift from the bottom half and reduce the risk of air pockets.

The final step is putting on the plastic, which sounds simple, but I still see many situations where bales are poorly wrapped. You can put them on the wrapper and get the plastic on fast, but the inconsistency will lead to air pockets in the tube or individual bale. These air pockets will produce mold and the hay will spoil. It seems simple, but placing the bales on the wrapper so the edges match up squarely makes a huge difference. Do not forget to put pressure on the tube wrapper. A tightly pressed tube pays dividends.

Perhaps some of these tips sound basic, but none will cost a lot of money. That’s what makes them so important and profitable.

This article appeared in the February 2021 issue of Hay & Forage Grower on page 9.

It’s true for RFQ, too Previous