Double-cropping is about timing

The author is an associate professor and dairy management extension specialist with Virginia Tech University. 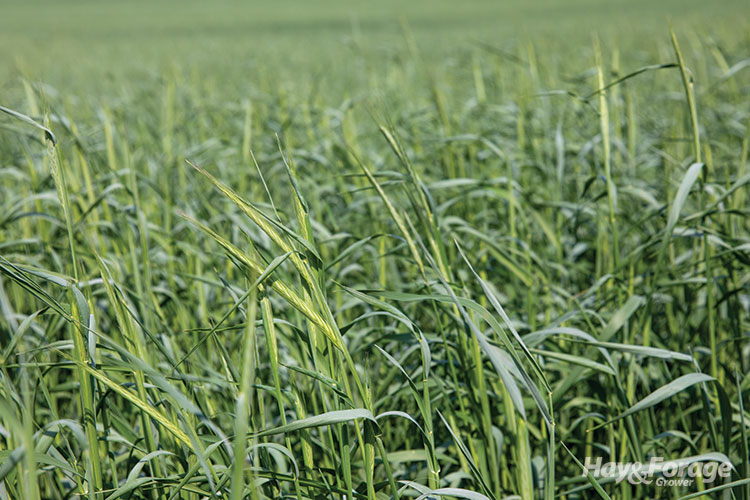 Different reasons exist for growing small grain crops on a dairy farm. Winter annual crops capture nitrogen from the manure applied to the soil, protect the soil from erosion, and provide forage for feeding cattle. In respect to forage production, it is sometimes believed that a double-crop rotation will yield more forage than a single crop rotation. However, a boost in total forage production due to double cropping does not always occur and should not be taken for granted.

A study done in Vermont and New Hampshire evaluated the production of forage under single- and double-cropping strategies in the context of an organic dairy production system. The study consisted of planting a full-season corn hybrid as a single crop at its optimum planting date (May 18 to May 25), a short-season corn planted after a winter crop (triticale or wheat) harvested at the boot stage of maturity (May 24 to June 10), and a short-season corn planted after a winter crop harvested at the soft-dough stage of maturity (June 28 to July 10).

Results from this study show that the double-crop system yielded more forage than the single-crop system. That being said, it seems like these plots were not evaluated as an integrated rotation, and it is worth mentioning that some of the corn plots in this study were harvested after a killing frost. Considering an annual, integrated rotation, it is unanswered what would have been the impact of the late harvest on a following small grain crop, which would have been planted later than recommended.

Similar to the previous study, delayed planting negatively affected corn yield. A big difference, however, is that the winter crop in this study produced 1.3% to 19.1% of the total forage produced, which is substantially less than in the first study (36.3% to 54.5%). In agreement with the latter study, another New York trial reported that triticale produced 15.9%, at the most, of the total forage production in a double-crop system with sorghum.

Managing a double-crop system to maximize forage production on a dairy farm is more complex than one might think. First and foremost, the geographic location and climate are major determinants to the success of a double-crop system as they will determine the optimum planting and harvesting dates for the winter and summer crops.

The contribution of the winter crop on the total forage yield should be considered when evaluating a double-crop system. The production advantages might be minimal when looking at the whole system, and the effort of growing a winter crop might not be worthwhile. That being said, if a double-crop system is used, the planting and harvest dates of both winter and summer crops should be optimized so that the crops are synergistic. Also recognize that there are agronomic and environmental benefits for growing a small grain between corn crops, and these might outweigh small losses in yield.

This article appeared in the August/September 2022 issue of Hay & Forage Grower on page 16.

What’s new in forage research? Next