Many layers to alternative forage production 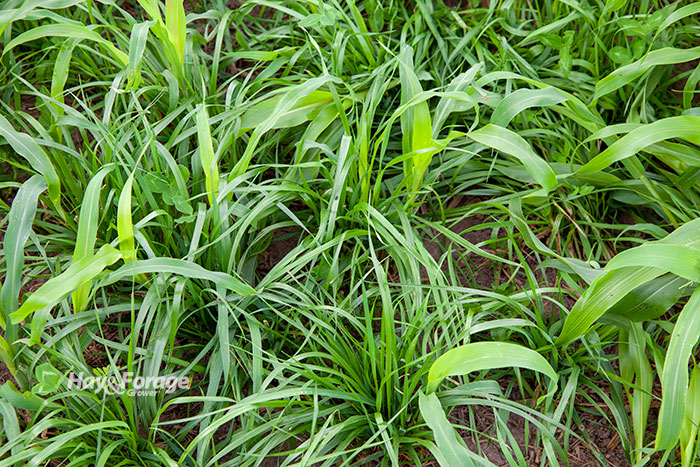 These factors justify the “why” behind integrating alternative forages into an operation; however, another aspect of this approach is the “what.” What species are best suited to a system? What will the forage yield and quality be? What amount of nitrogen do these crops require?

Matt Akins and Kevin Jarek with the University of Wisconsin-Madison addressed these questions on the World Dairy Expo’s Dairy Forage Seminar Stage earlier this month. Akins, a dairy extension specialist, and Jarek, a crops and soils extension educator, discussed different dimensions of alternative forage production and how to incorporate these crops into dairy cattle diets.

Perennial grasses can compete with alfalfa

Akins presented several studies to outline expectations for alternative forage quality and yield. An overlying theme of all of these experiments suggests harvest timing and fertility management is key to targeting high-quality dairy feed.

In a field trial in Marshfield, Wis., researchers compared alfalfa quality to that of grass species like festulolium, perennial ryegrass, tall fescue, orchardgrass, and meadow fescue. Each crop was either harvested four or five times, and 40 pounds of nitrogen were applied after each grass harvest.

“The grasses consistently had about 3% to 4% higher NDFD compared to alfalfa, ranging from about 60% to 70% NDFD,” Akins said. 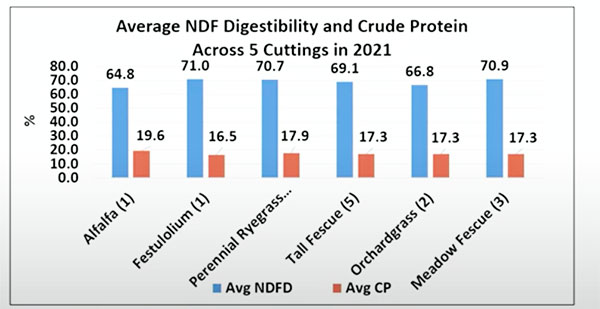 This data represented forage quality across all cuttings, but Akins noted that forage quality fluctuated throughout the year. For example, the grasses in the study had significantly lower relative forage quality (RFQ) after the first harvest compared to the second.

“As that plant is maturing early in the spring, it’s elongating, and you’re generally going to have higher fiber values and lower digestibility because of that,” Akins said. “We see greater quality in later cuttings because you have less stem and more leaf material.”

This distinction offers opportunities to allocate forage to different classes of livestock according to animals’ nutrient needs. Akins suggested feeding forage from first harvest to heifers and designating grass from subsequent cuttings to lactating cows.

Cereals are subject to the environment

To understand these points, researchers in central Wisconsin conducted a two-year study to assess triticale quality and yield. On average, NDF levels were about 40% to 45% at boot stage (see Figure 2). When plants reached heading stage, NDF levels jump to more than 60%. Conversely, total digestible nutrients (NDF) fell over time. 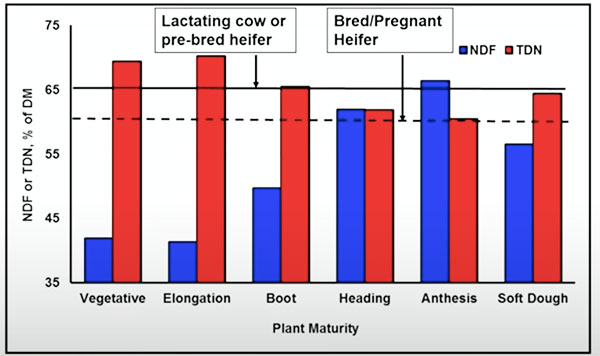 “You can tell the difference between the two years with identical management and fertility as a result of weather patterns and how that affects forages,” Akins said. “Yields are not always going to be consistent every year, and that is something to consider.”

A third approach to alternative forage production is seeding cocktail mixes. Akins said this practice has become more popular following a cereal forage harvest in the spring, and these combinations of grasses and legumes also have potential to be used for dairy feed.

One study from the University of Wisconsin-Madison collected data on a cocktail mix of sorghum-sudangrass, Italian ryegrass, hairy vetch, red clover, and berseem clover. The mix was planted in multiple research plots throughout the state in early June and harvested three times before the end of the growing season.

Although the legume species would presumably provide nitrogen credits to the grass species in the cocktail mix, this was not the case in the experiment. In fact, Akins stated the legumes were outcompeted by the grasses in most of the trials. Furthermore, stand composition, and thus forage quality, changed over time.

Cocktail mixes can either be stored in a single pile, or each cutting can be kept in separate piles or bags to distinguish forage compositions. The latter option allows producers to effectively allocate forage according to quality.

In addition to the types of alternative forages available, Jarek explained the economic implications of optimizing grass growth in these systems. More specifically, he analyzed data from a study that evaluated nitrogen application rates on Italian ryegrass and a cocktail mix of Italian ryegrass, hairy vetch, red clover, and berseem clover.

Each plot was divided into 28 cells, which were assigned different fertilizer treatments: 0, 30, 60, 90, 120, 150, and 180 pounds of total nitrogen throughout the growing season. The plots were harvested four times, and nitrogen was applied about a week after each cutting according to individual treatments.

“Once you put down 120, 150, or 180 pounds of nitrogen, that Italian ryegrass crowded out the other species,” Jarek said.

Dry matter steadily improved with added nitrogen at both locations, but the Italian ryegrass and cocktail mix in east central Wisconsin demonstrated diminishing points of return between 150 and 180 pounds of nitrogen per acre (see Figure 3). Conversely, yields at the more northern location (Opportunity Acres) continued to rise with additional nitrogen.

Jarek also explained the relationship between application rates and milk per ton. Since these values improved at similar rates as dry matter accumulation, he stated there was no correlation between nitrogen application and forage quality.

“Fertilization had little impact on milk per acre. Our dry matter is what drives the milk per acre,” Jarek said. “We need to do additional work on this as far as nitrogen uptake and use efficiency to compare that to dry matter yields of alfalfa and corn silage,” he concluded.