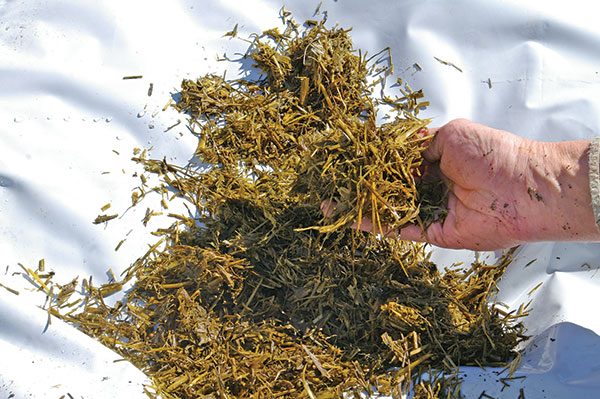 Forage is an indispensable part of dairy cow diets. However, due to its bulkiness and the inherently low levels of fiber digestibility, cows are limited in how much forage they can consume every day and still keep feed dry matter intakes at high enough levels to support peak milk production. Even though cows are biologically designed to digest forages, their improved genetic potential requires that they digest far more feed and nutrients than an all-forage diet can supply. Getting cows to milk on high-forage diets requires keeping the forage quality high and consistent and making it available throughout the year.

As we attempt to maximize forage in diets, it proves to be very challenging to get forage intakes over 80 percent of the total diet without compromising milk production. At the heart of the forage limitation is the amount and digestibility of the fiber fraction of the forage. The fibrous fraction of all forages is referred to as neutral detergent fiber (NDF), the term coming from the laboratory procedure developed to analyze fiber. More recently, an updated lab procedure has been developed that accounts for the excessive presence of ash (primarily dirt and/or minerals) that may be present in forage samples. This analysis has been coined aNDF. For the purposes of this article, the term NDF will be used.

The amount of forage a cow can consume is almost totally dependent on the NDF level of that forage. Forages that test high in protein usually have low levels of NDF. Protein and NDF tend to be inversely proportional. Several studies have determined that daily NDF intake from forages for dairy cows is limited to about 1.1 to 1.2 percent of their body weight (BW). As an example, using the maximum value of 1.2 percent of BW for a cow weighing 1,500 pounds, her maximum NDF intake from forage would be 18 pounds.

If a particular grass hay crop tests 60 percent NDF, the maximum forage intake for our 1,500-pound cow would be 30 pounds (18/0.6=30). If we expect this cow to produce 100 pounds of milk, her total dry matter intake should be near 60 pounds per day. The forage will only make up half of the diet dry matter intake. If, on the other hand, the NDF of the grass hay crop tested 50 percent, the cow could consume 36 pounds of forage (18/0.5=36). That’s an additional 6 pounds of forage the cow can eat, which brings the total up to 60 percent of the diet. The only way to feed higher levels of forage is for those forages to be lower in NDF.

In Ancramdale, N.Y., Jim Davenport milks about 65 cows and has spent many years focusing on growing and feeding as much forage as possible. The herd’s average milk production is in the high 70 pounds per cow range most of the year with a rolling herd average over 25,000 pounds per year. Along with the brown midrib corn silage that’s now a staple for many New York dairy diets, Davenport feeds hay crop forages that are high in protein and low in NDF.

He grows primarily endophyte-free tall fescue and reed canarygrass harvested mostly as haylage and stored in cement bunks that are sized appropriately for good face management. He works diligently to keep the NDF levels as close to 50 percent as possible for all cuttings, which means he closely monitors temperatures and degree days in determining when to mow — not a specific date on the calendar. With many years of experience behind him, he can hit his goal most of the time.

Focus on milk per acre

In the crop-growing business, there’s always the trade off between quality and tonnage. Farmers are inclined to maximize yield per acre. High yields, of course, equates to advanced plant maturity, which in turn equates to lower rumen digestibility and less metabolizable nutrition. Dairy farmers shouldn’t focus on how many tons of feed they get from a field — they should be focusing on pounds of milk per acre. 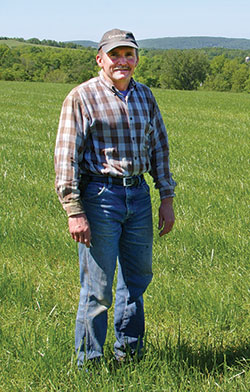 Jim Davenport has a goal to feed 80 percent forage. The best he’s done to date has been 75 percent.

Davenport has found that compromising quality and allowing NDF levels to climb over 50 percent will cost him more milk production than what he may get in extra tonnage per acre. He’s found that, for his farm and the local growing conditions, the optimal yield tends to be about 1.5 tons of dry matter per acre per cutting. That’s the place where he feels he gets the most milk per acre. This past season, he harvested over 5 tons of dry matter in four cuttings.

This is a key concept that must be well understood when making the most out of raising your own forages. Unless aggressively managed, homegrown forage can quickly become heifer and dry cow hay. As tempting as it is to grow your own feed to offset the rising cost of grains and by-products, forages are completely unforgiving when it comes to low quality, and the drop in milk production will more than offset any savings on purchased feeds.

A herd producing close to 80 pounds of milk per cow per day, all year long, consumes a lot of feed, and Davenport strives to get his cows to eat as much forage as possible and still keep milk production up. His goal has been to get them to 80 percent forage — but that has yet to happen. He’s had years where he’s had his cows up to 75 percent of their diet — and had the average daily milk production per cow over 80 pounds.

Every year is different, Davenport notes. At the end of 2015, his cows were consuming less than 70 percent forage and the average milk production was down to 76 pounds per cow. Davenport believes that the NDF digestibility may be down in the 2015 crops due to sporadic rainfall during the earlier part of the season. He surmises this might have stressed plants, resulting in higher lignification of the fiber — but that’s just a guess.

Grain prices and markets also influence how much forage should be fed. Several years ago when grain prices went through the roof, it made sense to focus on trying to maximize forage intakes. As grain prices have moderated more recently, it may make more sense to increase grain and by-products to make more milk, especially if the forage quality has diminished.

With a renewed interest in the economic value of feeding forages to dairy cows, researchers and nutritionists recognize the importance of being able to more accurately model and predict how any given forage will digest and what level of nutrition can be expected from it. The NDF digestibility varies among forages as well as within forages. As it turns out, fiber consists of rapidly digested pools of NDF, along with slower digesting pools, and finally an indigestible fraction.

And while the cows ultimately will tell the story of whether the forage they consume is good or bad, nutritionists would like to know beforehand how a forage will behave in the digestive system before a dairy farmer puts it in front of his cows. Ongoing industry and university research will eventually unlock the secrets still not known about the different digestibility fractions of NDF.

Meanwhile, dairy farmers who focus on feeding forages that are low in NDF, plant cultivars/hybrids that have been proven to be more digestible such as BMR, will be able to feed more forage and keep the grain bill down. Higher forage diets usually mean healthier and more profitable cows. •

This article appeared in the January 2016 issue of Hay & Forage Grower on pages 18 and 19.

What’s the score? Next

BMR corn: Love it or leave it Previous