Manure after alfalfa: Consider the options

Applying manure immediately after alfalfa harvest opens up windows of time for manure application not available with most annual crops, and it expands the acreage base for nutrient management plan requirements. In addition, alfalfa can benefit from the potassium, phosphorus, sulfur, and micronutrients in manure.

When it comes to nitrogen (N), it seems counterintuitive to apply manure to alfalfa and other nitrogen-
fixing legumes. But here the benefit can be to the environment because applying N actually reduces the amount of symbiotic N fixation, thus reducing the risk of nitrate leaching from the applied manure.

Application of liquid manure on established stands of alfalfa has shown mixed results. Topdressed slurry resulted in higher, lower or no change to harvested yield in research from Minnesota, Wisconsin, and Maryland. Probably the most comprehensive study was one in Ontario where liquid dairy manure was band-applied twice annually to 49 alfalfa cultivars for three years. Average alfalfa yields rose 14 percent with manure compared to the no-manure control, with some varieties showing much larger yield responses. 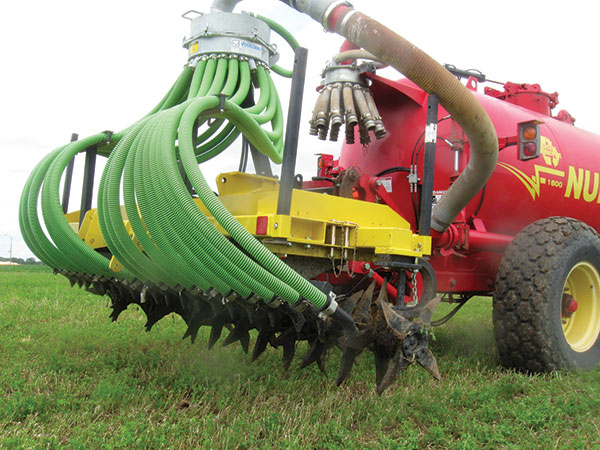 Surface broadcast is the dominant method of manure application for alfalfa and other perennial forages in the U.S. Beyond soil compaction and plant damage, there are other challenges associated with broadcast manure application on alfalfa following a harvest — plant smothering, introduction of pathogens that may contaminate feed, nutrient runoff, and odor or ammonia emissions. However, careful management can minimize these challenges.

So, too, can alternative broadcast application options such as shallow injection, surface banding above the canopy, banding on the soil surface with drag-shoe or trailing-foot, and band application with tine aeration. These methods can reduce challenges associated with broadcast application because manure is applied in narrow bands directly into the soil or on the soil surface, often underneath the crop canopy. Other possible benefits are reduced odor, nutrient runoff and gaseous emissions. Such benefits need to be balanced against the potential for stand or yield loss from soil disturbance and mechanical damage to plants.

There has been only limited research with alternative application methods on alfalfa. In a Saskatchewan study, injection of manure improved alfalfa yields on a low-fertility site but lowered yields on a high-fertility site due to stand damage.

Manure was applied annually after first (2015) or second (2014) harvest with an 1,800-gallon research model spreader. The target manure application rate was 4,000 to 5,000 gallons per acre, but equipment problems in 2014 resulted in an excessive rate that year. There were no significant treatment effects on yields in the first harvest after the August 7, 2014, manure application, nor on the next harvest in June of 2015. This suggests that there was little or no damage to the stand due to manure or mechanical effects. However, yield from shallow injection was significantly lower than most other treatments in the first harvest (July 22) following the 2015 manure application. But the yield effect had disappeared by the next harvest in August.

Ammonia emission was greatly reduced by shallow injection compared to the other methods. Emission of nitrous oxide, a potent greenhouse gas, was increased by manure application but was limited primarily to the few weeks following application. Treatment effects were somewhat variable, but in 2015 nitrous oxide emission was greater from the injection and aerator-band treatments than from broadcast.

In summary, preliminary results from the first two years of this study show minimal effects of manure application on yield compared to the no-manure control (optimum or higher soil test P and K); however, there was some indication of a short-term (one harvest) decrease in yield from the injection treatment. Injection greatly reduced ammonia emission, but there may be a trade-off with increased greenhouse gas emission.

This article appeared in the April/May 2016 issue of Hay & Forage Grower on page 24.

Save the leaves for quality alfalfa Next

First cut: It’s all about the weather Previous