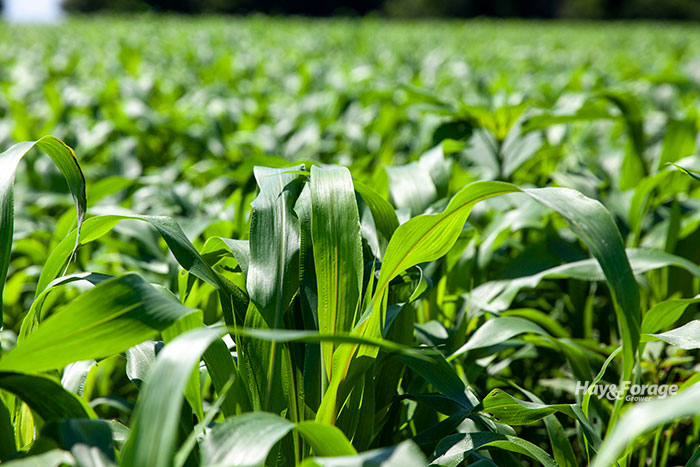 Although using a companion crop to establish alfalfa is not as widespread as it used to be, it’s still a common practice in many regions of the U.S. Generally, a small grain such as oats is used as the companion crop. Some success has also been achieved with ryegrass.

Researchers at McGill University in southern Quebec, Canada, evaluated the use of sudangrass as a companion crop for alfalfa. Their results were recently published in Crop, Forage & Turfgrass Management.

Plots were established in four different environments in southwest Quebec from 2014 to 2017. Seeding dates ranged from mid-May to mid-June across the environments. Data was collected during the seeding year and the first production year.

Alfalfa was seeded at 12 pounds per acre for all treatments. The treatment comparisons were as follows:

Surprisingly, sudangrass competed favorably compared to the more traditional companion crop options. It performed best when planted after June 1. Sudangrass was less competitive with the alfalfa during the seeding year compared with the oats and ryegrass, but total seeding-year yields were similar to oats. The ryegrass treatment resulted in similar total-season seeding-year yields as the solo-seeded alfalfa but less than the sudangrass or oats.

When comparing planting dates, it’s not surprising that the oats and ryegrass performed best with the earlier May planting dates while the sudangrass excelled with the June planting dates. In only one of the four environments was there a significant difference in total-season alfalfa yields in the first production year after seeding, and that difference came in favor of the solo-seeded alfalfa treatment.

From a forage quality perspective, sudangrass was similar to oats but somewhat lower than the ryegrass.

Although most alfalfa producers won’t want to wait until June to seed alfalfa, there may years where seedings are delayed because of weather or you’d like to seed following a winter cereal harvest. In such cases, perhaps sudangrass is worth consideration as a companion crop.