Alfalfa is the fourth most widely grown crop nationwide and historically has been one of the most popular forages among livestock producers due to its high yield and quality potential. Alfalfa utilization in the South, however, is a different story. A once dominant forage legume in the Deep South, alfalfa saw significant decline from the early 1950s and remained seldom used. That trend shifted recently because of research and extension efforts, which have highlighted the great potential of this forage crop in the region.

As commodity prices continue to climb, thus eliminating the option for cheap nitrogen and supplemental feed sources, more producers are looking at legumes as a viable alternative in their forage production systems. With alfalfa being the highest quality short-term perennial legume option available, there has been a resurgence of alfalfa production in the South.

At the University of Georgia’s (UGA) Tifton campus, researchers have teamed up with America’s Alfalfa by using Roundup Ready alfalfa technology to reintroduce the idea of alfalfa production in the South. We have highlighted the benefits of alfalfa in rotation with annual row crops, utilized Roundup Ready alfalfa as an option to suppress common troublesome weeds, and demonstrated the potential of this perennial legume to sequester carbon and improve soil health.

Precision agriculture has been around almost two decades. Technologies such as global positioning systems (GPS), variable-rate application of crop inputs (seed, water, and fertilizer), in-season crop monitoring, yield mapping, and data management are commonly utilized by Southern row crop producers. Application of these precision agriculture technologies not only enhances application accuracy and efficiency of crop inputs, but it also helps improve sustainability and the overall profitability of row-crop production.

The benefits of these technologies in row crops have been well demonstrated by researchers over the years; however, these same technologies are not commonly found on hay and livestock operations in the region. Thus, forage-focused and precision agriculture researchers at the Tifton campus are collaborating to demonstrate their beneficial use to Southern forage and livestock producers.

An easy place to start

One of the most widely adopted and easily integrated precision agriculture technologies are GPS systems. GPS systems can be a helpful addition to traditional equipment like sprayers, seed drills, fertilizer spreaders, and forage harvesting equipment. Traditional methods of keeping track of field location rely heavily on tire tracks and soil disturbances, which can lead to potential overlaps and/or skips in the field.

The second most used precision ag technology after GPS is precision soil sampling and variable rate fertilizer application. Most fields in the southern U.S. have large inherent soil variability, which makes it difficult to detect the actual nutrient spatial variability when using traditional soil sampling strategies such as a single sample or a few composite samples from a field. Even following the most stringent of soil sampling procedures, there are significant limitations when relying on composite samples to develop a single-rate fertilizer recommendation.

Precision soil sampling techniques, grid- or zone-based, not only help us in understanding the nutrient variability within the field but also forms the basis of another commonly adopted precision ag technology — variable-rate nutrient application. Variable rate nutrient maps provide a fertilizer prescription with site-specific application of nutrients to address soil variability and improve nutrient use efficiency.

These technologies enhance application efficiency and accuracy of nutrients, which improves overall system performance, sustainability, and productivity by applying based on needs within specific grids or zones across the field. Further, this technology has become a standard option on most commercial application equipment. This makes utilization of variable rate fertilizer application within forage systems as easy as implementing a precision soil sampling strategy and creating a variable rate prescription map.

Since its inception, yield mapping has evolved into an important data layer in assessing cropping system performance. Think of the yield map as a “report card” for your operation. Having this report allows you to evaluate field productivity and create management strategies based on production zones as identified through seasonal yield variability.

Traditional yield monitoring in annual row crop production tends to focus heavily on the end product, the harvestable component of the annual system (grain, lint, kernel, and so forth). Currently there is not a commercial yield monitoring system available for forage systems in which multiple harvests can be combined from the same field within a growing season. However, the availability of advanced remote sensing tools, such as high-resolution satellite imagery (1 to 5 meters), provide a unique opportunity to map forage yield via spatial biomass measurements and make in-season management adjustments to improve stand performance from harvest-to-harvest rather than just season-to-season. The ability to understand spatial yield variability in alfalfa can help in being more efficient with crop inputs and maximize yield and profitability through implementation of precision agriculture technologies.

Putting it into practice

In fall 2021, researchers at UGA in Tifton began to incorporate precision agriculture into alfalfa production starting with establishment. A 50-acre irrigated field that had been primarily corn for several years was prepped for alfalfa seeding, and precision soil sampling was done on a 1-acre grid level to illustrate field changes to the smallest manageable unit possible.

With the assistance of the UGA soil testing lab, these samples will be analyzed annually to look closely at soil nutrient levels and soil health parameters. We will determine potential changes in carbon as well as other nutrients within the soil. This field was planted and has been fertilized and sprayed using GPS technology to increase application accuracy and also mark problem areas in the field that can be further tracked with accuracy over time.

Using the nutrient analysis from the 1-acre grid sampling, a variable rate potassium map was created (Figure 1) and used for the first application at the beginning of the growing season. Additionally, high resolution satellite imagery was accessed regularly, which provides spatial and temporal biomass variability in the field across the season. 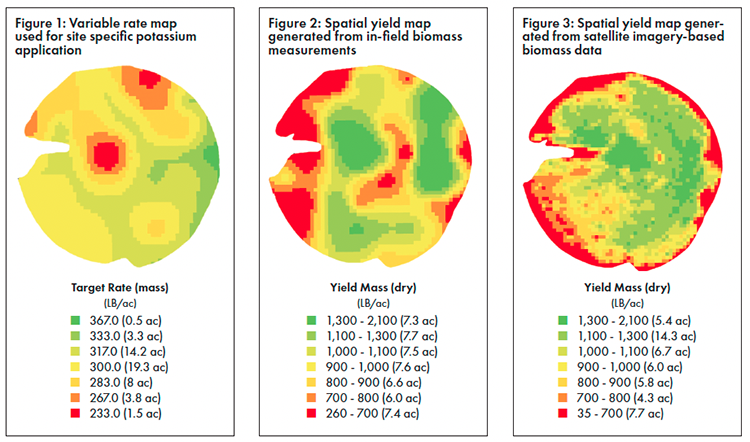 Yield maps generated from both the in-field data (Figure 2) and the satellite imagery (Figure 3) showed significant yield variability (35 to 2,100 pounds per acre) within the field. An interesting highlight was the obvious impact of drought during the time of data collection and the significant limitations of irrigation water at the outer edges of the pivot, a trend that would have significant impact on calculations of true harvest yield and total-season yield estimates.

By using these technologies, we can implement management strategies to enhance performance through the assignment of specified zones within a field, identify problem areas, and make in-season, data-driven decisions to positively impact future harvests.

Through this work, we are continually looking to expand opportunities to incorporate precision ag technologies for alfalfa and other forage crops, making an uncommon practice more commonplace in the South.

This article appeared in the November 2022 issue of Hay & Forage Grower on pages 10-11.

Reduced-lignin alfalfa shows promise in the Southern Plains Next