The author is an extension forage systems specialist with Oklahoma State University. 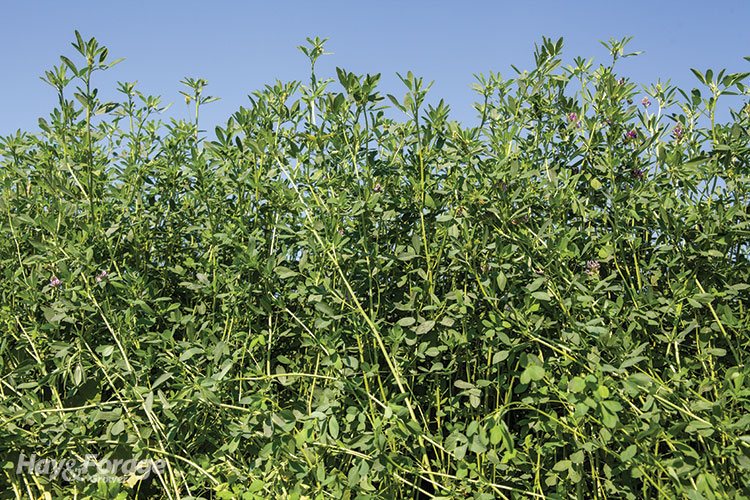 The alfalfa acreage in Oklahoma has drastically declined in recent years, according to the National Agricultural Statistics Services (NASS). The total alfalfa harvested area dropped from 310,000 acres in 2010 to 180,000 in 2021 — an alarming 42% reduction. This acreage reduction was reflected in a 45% drop in Oklahoma’s alfalfa hay production during the same period — from a little over 1 million tons in 2010 to 462,000 tons in 2021. Fortunately, a modest 40,000 rise in alfalfa acres was forecasted this year in Oklahoma; however, the total alfalfa production is estimated to be 96,000 tons less than last year.

Even though the severe drought that hit the Southern Great Plains is to blame for this year’s low production, the overall recent trend can be attributed to other reasons. Among the many factors that have contributed to this unfortunate alfalfa situation is the lack of adaptation of new alfalfa technologies such as reduced-lignin (HarvXtra-traited) alfalfa. Furthermore, the lack of science-based information for the region allowed unsubstantiated rumors to slow reduced-lignin cultivar adoption. Among these rumors, the most prominent ones were “low yields” and “plant lodging.” 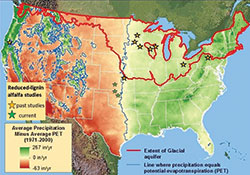 To address this issue, researchers at Oklahoma and Kansas State Universities are developing best management practices (BMPs) for producing reduced-lignin alfalfa in the Southern Plains where water is a limited resource. This effort is an ongoing project sponsored by the National Institute of Food and Agriculture (NIFA) Alfalfa Seed and Alfalfa Forage Program. The project’s research and outreach activities are ongoing; however, some take-home lessons have already been learned from the preliminary results and interactions with producers, extension agents, and industry personnel.

Rather than assume farm needs and practices, the project focuses on interacting with producers to understand the region’s alfalfa production systems. An on-farm survey gathered site-specific information on 394 commercial alfalfa fields. This database, combined with an extensive alfalfa literature review and crop modeling, revealed that most of the management-related opportunities to improve alfalfa yield occurs in the establishment year by manipulating planting date, row spacing, and seeding rate. The next important factor was phosphorus fertilization in the subsequent years after seeding. 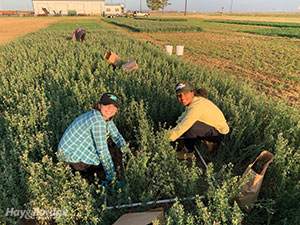 Research plots of reduced-lignin alfalfa were sampled and evaluated for yield, forage quality, and water use efficiency in Oklahoma and Kansas.
Based on these results, extension materials and activities have been developed to inform producers about alfalfa establishment and fertilization BMPs. The main idea behind this effort is to inform producers about primary alfalfa BMPs that would maximize alfalfa production in the region. If properly adopted, these BMPs would build the foundation for reduced-lignin alfalfa to express its full production potential in the Southern Great Plains.

Another objective of the project is to quantify the effects of cutting management of conventional and reduced-lignin alfalfa cultivars on forage yield, quality, and water-use efficiency (WUE). One reduced-lignin variety and three conventional alfalfa cultivars have been evaluated during three consecutive growing seasons at three different sites (Stillwater and Lahoma, Okla., and Hutchinson, Kan.). At all locations, the varieties were harvested at three different harvest intervals — 28, 35, and 42 days. Also, 2-meter deep access tubes were installed to monitor soil water content in the alfalfa fields. Although the third season data are still being processed, the partial results from the first two years’ data revealed interesting results.

Different from findings at other U.S. regions, the two-years of data indicated that a 35-day harvest interval had greater or similar yield to that of 42 days. Timing harvests to allow rainfall to coincide with early alfalfa regrowth enhances water use efficiency and it is key to maximize alfalfa production in water limiting environments. Moreover, our early results confirmed the same reduced-lignin alfalfa yield and quality performance that has been observed in the other regions.

We anticipate that a final, more in-depth data analyses that accounts for alfalfa yield, forage quality, and harvest interval relationships with soil water use may reveal important management aspects to be considered for producers in the Southern Great Plains. Stay tuned for the final results.

This article appeared in the November 2022 issue of Hay & Forage Grower on pages 12-13.

Winter grazing alfalfa: a win-win in the West Next