Winter grazing alfalfa: a win-win in the West

The author is a University of California Cooperative Extension farm advisor in Woodland, Calif. 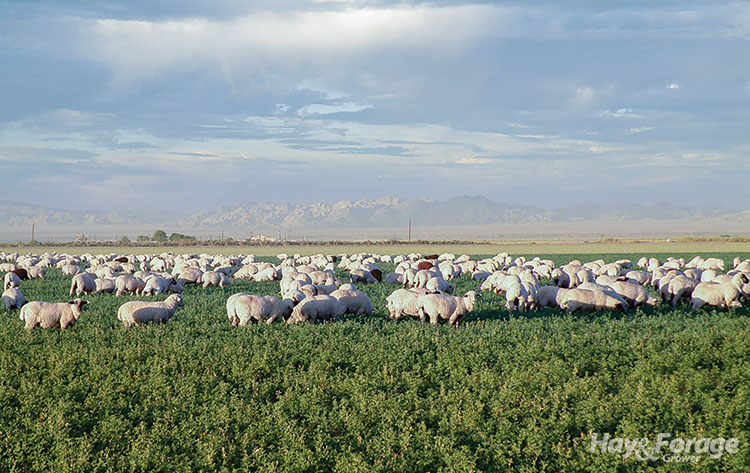 Interest in integrating livestock and alfalfa production is on the rise in the U.S. as a way to produce food more sustainably. There are significant economic and environmental advantages to grazing, including lower costs, pest control, healthier animals, and soil benefits. The main concerns may be bloat risk or hoof damage to fields, but millions of acres of alfalfa and alfalfa-grass mixtures are grazed safely each year.

The practice of routinely grazing alfalfa and alfalfa-grass mixes is not new. It is a historical practice in the U.S., and in many parts of the world, grazing alfalfa is an important, if not dominant, method of meat and milk production. Key reasons for grazing versus haying include improved animal health, reduced labor costs, reduced fuel and equipment costs, and access to specialty markets such as organic and grass-fed livestock. There are also benefits to soil health since manure improves soil structure and contributes to plant nutrition. Grazing also reduces animal waste streams from confined livestock operations.

In Western states, grazing irrigated alfalfa with sheep (called “sheeping-off”) or goats during late fall or wintertime when fields are mostly dormant is a common practice. Primary benefits for livestock producers include a source of inexpensive feed, especially needed in times of drought and feed shortages, and a favorable lambing environment. Grazing late-fall or winter alfalfa growth cleans up winter weeds and allows for cleaner regrowth in the spring. Winter grazing has also been shown to reduce alfalfa weevil larvae, depending upon timing.

California currently ranks second in the nation for sheep production with 550,000 head, 2.4 million pounds of wool produced, and $80 million in annual receipts. Texas ranks first, with many other Western states also having significant sheep production. Currently, the bulk of California’s lambs are born in the fall and early winter when grasses are just beginning to grow from seasonal rains. Grazing alfalfa at this time of year accommodates the lambing operation by providing high-quality feed at a time when rangeland forage conditions are poor.

In California’s Imperial Valley, sheep typically arrive from throughout the western U.S. in October when they weigh about 70 pounds and rotate between fields of alfalfa until mid-March when they are sent to a feedlot or to slaughter at a finished weight of 130 pounds.

A typical stocking rate is about 30 to 40 sheep per acre. A major risk of grazing is soil compaction, especially if it’s wet, and alfalfa stand loss from livestock trampling or bedding down. To prevent overgrazing, graziers commonly establish smaller paddocks on fields with temporary fencing. Animals are moved to new areas of the field daily to weekly, depending on the amount of standing alfalfa crop, stocking density, and paddock size. Livestock then graze alfalfa fields until the alfalfa stubble is about 1 to 2 inches tall.

Graziers generally pay growers for the feed on a per head per day basis (for example, 31 cents per head) or on a per acre basis ($190 to $290 per acre) as grazing often substitutes for a hay harvest. This works well for growers with added income at a time when it’s generally too cold and wet to make hay. Labor may also be diverted to other activities such as vegetable crop production or equipment maintenance. In areas of the Southwest, many farm workers take leave during winter months. 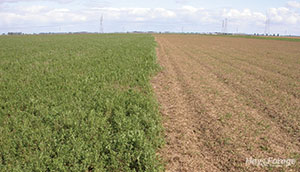 “Sheeping-off” alfalfa provides a sustainable way of managing weeds, insects, and diseases. It also aids in cleaning up fields for a high-quality first cutting of hay.
In addition to income, the benefits of grazing alfalfa fields include the removal of excess winter growth, which results in cleaner hay at first cutting, and sustainable pest management practices. Grazing helps control winter weeds in both seedling and established alfalfa stands, which is a significant benefit, especially for organic growers.

There are many aggressive winter weeds that are very palatable and acceptable as sheep or goat feed. The well-established alfalfa can then come back vigorously in the warmer spring period and shade out broadleaf and grassy weeds that have been suppressed by grazing. Opening the canopy also helps prevent infection of foliar diseases such as white mold (Sclerotinia) and others that result from a heavy canopy and poor air flow during wintertime.

The consumption of alfalfa stems in the winter period is an important practice for controlling alfalfa weevils that emerge in February or March. Alfalfa weevil eggs are typically laid in mature alfalfa stems in late fall through early spring. If stems are consumed, larvae do not emerge to damage the first-growth alfalfa. Removal of the canopy also exposes voles and gophers to owls, eagles, hawks, and other predators so they can hunt and reduce the rodent population.

There are differences between goats, sheep, and cattle in their grazing habits that are important to recognize when grazing alfalfa. Goats are natural browsers and will eat more woody plant material, including mature weeds, and often prefer the tops of plants. Sheep are closer grazers, eating short, tender broadleaf plants and grasses. For short periods, lactating dairy cows can graze the tops of alfalfa fields where most of the high-energy and protein feed is contained. They can be followed by dry cows, growing heifers, beef cattle, or goats and sheep. This is a common practice in Argentina where lactating dairy cows are moved twice per day followed by other classes of animals for “clean up.”

Grazing alfalfa does come with some manageable risks. Excessive grazing pressure, severe hoof damage to crowns and buds, compaction of wet soils, or poor timing of grazing will reduce stand health and regrowth. For example, grazing too soon before plants have a chance to recover from a hay cutting or drought stress can weaken plants, leading to stand losses. Grazing too late in the winter when plants are breaking dormancy can result in reduced yields for first cuttings.

Animals can also knock down levees or checks, especially when fields are wet, resulting in problems irrigating fields. The potential for rain and wet soils in managing sheep is one reason that most grazing of alfalfa occurs in drier regions such as the southern San Joaquin Valley and the low deserts of California and Arizona.

Livestock can also introduce weed seeds into alfalfa fields that pass through their gut or fall off their hair or wool. For example, dodder is of particular concern when grazing alfalfa since it is difficult to control. Stem nematode can also potentially be spread by livestock. Alternative feeds with low weed-seed risk include commodity grains, almond hulls, and many other crop by-products that might be fed to livestock before bringing them onto alfalfa fields.

In addition to alfalfa production risks, there are also concerns about food safety risks under the Food Safety Modernization Act and California’s Leafy Green Marketing Agreement (LGMA). The presence of livestock in or near fresh-market vegetable fields raises concerns about the potential for contaminating produce with pathogenic fecal bacteria. Requirements for buffer zones impacts the ability of forage producers to choose when they are grazing sheep based on vegetable harvest schedules of nearby fields. Information on buffers and risks associated with grazing animals close to fresh market vegetables can be found in the LGMA guidelines document.

Frothy bloat is probably the greatest single fear that livestock producers have about grazing alfalfa. Although bloat is an ongoing concern for graziers, there are measures that can significantly lower the risk, and one must remember that millions of acres are grazed each year safely.

For alfalfa fields that have more mature growth with young sprouts coming up from the crown, there is additional bloat risk, especially with young lambs that may go directly to the new growth. Goats tend to handle older, woodier stems a little better than lambs and are generally less prone to bloat.

It’s important to condition animals to fresh-grazed fields. As such, graziers match the condition of the field to the types of animals placed there, whether sheep, goats, or cattle. Bloat risk is reduced by feeding a grass hay prior to turning animals onto fresh alfalfa growth and by feeding bloat-preventing compounds in a mineral mix. As managers gain experience grazing alfalfa, they become skilled at modulating livestock consumption of alfalfa to prevent bloat.

Grazing alfalfa stands with sheep or goats can be a win-win for both alfalfa growers and livestock producers. Graziers are able to obtain high-quality feed for livestock, which is critically needed in times of feed deficits. Alfalfa growers realize additional income plus more sustainable weed and pest control.

Success for integrating livestock into alfalfa production systems is dependent on a sound strategy, especially the right timing for when to bring animals onto fields and how long to graze to prevent overgrazing, soil compaction, and stand losses. A bloat prevention plan is also needed.

The author wishes to acknowledge Morgan Doran, Brooke Latack, and Dan Putnam for their contributions to this article.

This article appeared in the November 2022 issue of Hay & Forage Grower on pages 34-35.