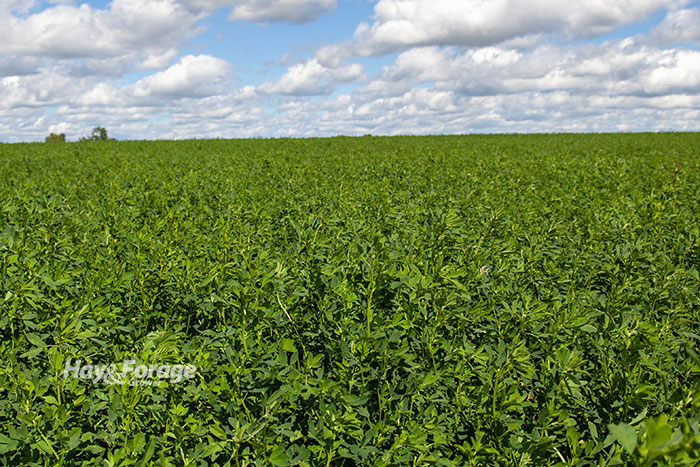 Among the many politically polarizing issues of the day is climate change. A multitude of claims — many unsubstantiated — are made by both the “doom and gloomers” as well as the deniers.

Alan Rotz is an agricultural engineer with the USDA-Agricultural Research Service based in University Park, Pa. He proposes we follow the science when predicting the outcomes of climate change and spoke last week at the World Alfalfa Congress in San Diego, Calif., about the future of alfalfa in a changing environment. His news was not all bad.

“Climate changes are slow and difficult to observe over time,” Rotz said. “Weather varies considerably from day-to-day and year-to-year, which masks the change that is occurring. Only through long-term measurements can we quantify changes in temperature and precipitation.”

Rotz noted that temperatures in the western U.S. have risen by 1°F to 2°F since 1991 while there has been little change in the Southeast. Precipitation patterns are also changing, but the degree of change hinges largely on location. Generally speaking, drier regions are getting drier and wetter regions are getting wetter. The ag engineer noted that extreme rainfall events have increased by about 40% in the northern U.S. while little change has occurred in the Southwest.

The concentration of carbon dioxide (CO2) in the atmosphere has risen by about 30% since 1960, which is mostly attributed to fossil fuel burning. Scientists believe this is the core cause for the changes we are seeing in our climate, as there is a high correlation between global temperature and atmospheric CO2 concentration. Methane gas is also a causative factor, but it does not create the long-term impact seen with CO2.

To anticipate how alfalfa production might change in future years as a result of climate change, Rotz and his team began by using nine different predictive climate models under a worst-case scenario where fossil fuel consumption continues at its current rate.

“Based upon the current rate of greenhouse gas emissions, average annual temperatures are predicted to increase by 3°F to 4°F by mid-century and 8°F to 10°F by the end of the century,” Rotz said. “In general, temperature increases are a little greater in more Northern locations relative to Southern locations. Of course, the temperature rise might slow by mid-century if we reduce our current level of fossil fuel use.”

“Precipitation patterns and amounts don’t tell the complete story,” Rotz noted. “With higher temperatures, evapotranspiration from the crop will also increase. In the drier regions, there is a projected annual deficit of 2 to 4 inches of water by mid-century. In the wetter Eastern regions, there is projected to be a small rise in available water. Since most of the increase in precipitation occurs in the winter and spring periods, and the majority of evapotranspiration occurs in the summer, summers will get drier,” he added.

Rotz said that atmospheric and climate changes will have varying effects on forage production. “An important benefit comes from the increasing CO2 levels in the atmosphere,” he noted. “More available CO2 stimulates the growth of most forage crops, including alfalfa.”

Rising temperatures also extends the growing season, particularly in the Northern regions, by possibly allowing for more harvests per year. Rotz said that changes in precipitation patterns will affect the field curing and harvest of alfalfa in some areas, but this is not anticipated to have much impact since most of the additional precipitation occurs outside the harvest season.

Scientists are able to link crop and global climate models to study predicted impacts on crop production. Rotz used the Integrated Farm System Model to simulate alfalfa growth and harvest under weather patterns predicted by each of the nine climate models.

He found that harvested alfalfa yields will likely rise in each of the states modeled by mid-century, with less change during the remainder of the century (see Figure 1). This yield improvement comes primarily from what Rotz calls “carbon fertilization,” or the rise in atmospheric CO2. For Northern locations, the longer growing season will also allow for an extra alfalfa cutting, which further boosts yield potential.

“These projections are based upon the assumption that adequate irrigation water will be available to support the higher yields in the Western regions,” Rotz noted. “That is probably wishful thinking. If irrigation water becomes more restricted, the loss of production may be substantial.”

Of course, changes in temperature and rainfall can also impact other aspects of crop production. Rotz said that milder winters, longer growing seasons, and higher atmospheric CO2 will benefit weed growth. Also, we can expect added pressure from insects and diseases in warmer and wetter conditions. The unknown impact of these pests was not considered in the prediction of future alfalfa yields.

Winter grazing alfalfa: a win-win in the West Previous