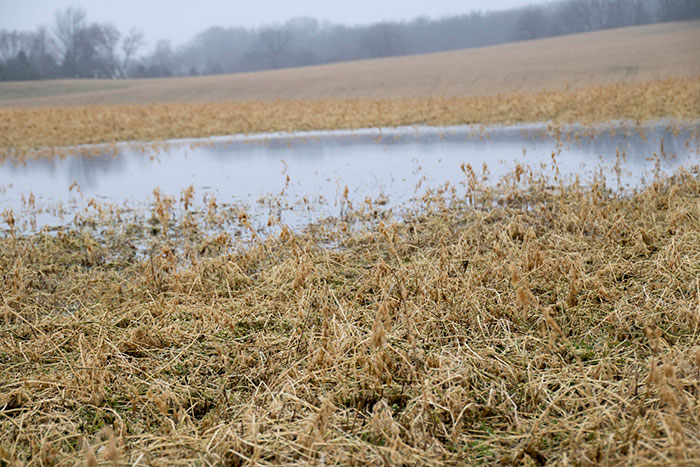 The weather geeks at the National Oceanic and Atmospheric Administration (NOAA) tell us that 2016 was the second warmest year for the U.S. in the 122 years of record keeping. It was the 24th wettest year, but we also had double the record number of inland flooding events.

What’s done is done, but 2017 is not exactly starting out as anything close to normal in many U.S. regions. The impact on the forage industry, especially alfalfa, looms heavy; it almost always does in matters concerning weather.

Let’s begin in the West where Dan Putnam, extension forage specialist for the University of California-Davis, recently reported that some fields in northern California are flooded from relentless rains. It was needed moisture, for sure, but Putnam points out that there can be consequences to long-term ponding on alfalfa fields.

“The extent of either (plant) death or damage depends upon temperature, drainage, alfalfa growth status, and duration of flooding,” Putnam notes in a recent Alfalfa & Forage News blog.

He explains that dormant alfalfa varieties under cool or cold conditions may tolerate winter flooding more so than the green, actively growing plants in the warmer, desert regions. This is because plant respiration rates are much slower, somewhat buffering the effect of anaerobic (no oxygen) conditions caused by flooded or waterlogged soils.

In addition to the impairment of the plant to “breath,” Putnam notes that flooded alfalfa plants may suffer root damage in the form of fine root hair death, pruning, and weakened nitrogen-fixing nodules. Saturated soils also impair the uptake of micronutrients and predispose plants to disease infections. New seedings planted last fall are especially susceptible to damage.

A warm and wet Midwest

Some early December snow set the stage for a desired winter groundcover in most of the Upper Midwest. It didn’t last long as temperatures warmed with the new year and were accompanied by volumes of liquid precipitation in many areas. Temperatures in the 40s and 50s are not normal for January, but they have been this year, even in the northern states.

Many fields contain standing water with thawed or thawing saturated soils. Given that winter is far from the finish line, the concern now turns to ice formation if the water doesn’t infiltrate the soil before colder temperatures return.

“A solid layer of ice restricts air diffusion and suffocates alfalfa plants,” says Dan Undersander, University of Wisconsin extension forage agronomist. “Solid ice is more devastating than ice that is cracked or where plant stems are sticking above the ice layer,” he adds. As with water, the duration of ice cover plays a large role in determining the potential for damage.

Undersander doesn’t recommend any remedial practices when ice forms over alfalfa fields. Practices such as pulling a disk across the field to break the ice or applying fertilizer to melt the ice are generally of little consequence and often can cause more damage than if fields were left alone.

It’s never easy to predict damage incurred to alfalfa during winter. Be it water or ice, the effects of damage, or lack thereof, are usually not known for weeks and sometimes months into the future.

Past history tells us that the spectrum of potential damage is wide, ranging from total death to slightly weakened plants. In the latter case, both Putnam and Undersander suggest conservative management during the upcoming growing season. Let plants reach 10 percent bloom to build carbohydrate reserves before taking the initial cutting. Also, be vigilant to ensure adequate soil fertility and control pests. Insects often prefer stressed plants. Where possible, also try to control weeds.

Though nothing can be done at this time, it doesn’t hurt to develop a backup plan if the worst-case scenario comes to fruition. Think about alternative crop rotations, possible interseeding strategies for new seedings, annual forages that could fill a short-term feeding need, and when or where new seedings might be established in 2017. Then hope none of those plans will ever be needed.