What we've learned about the HarvXtra trait 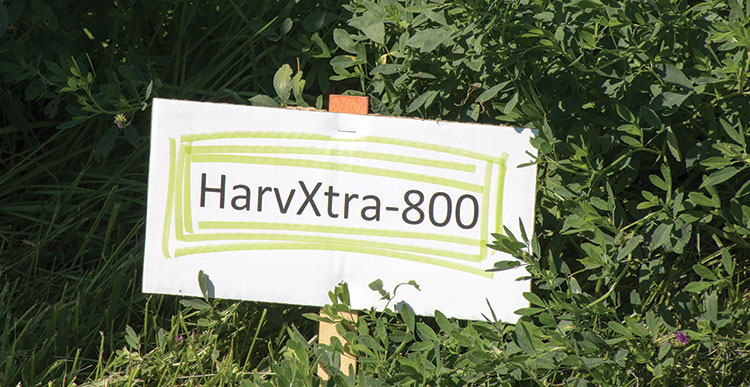 Cutting frequency, timing, and forage quality are now being evaluated in university field trials across the U.S.
It was difficult to attend a forage meeting in the past 12 months that didn’t have reduced-lignin alfalfa somewhere on the agenda. The HarvXtra trait is the second transgenic offering to alfalfa growers with glyphosate resistance (Roundup Ready) having been released about 10 years ago.

The majority of the HarvXtra story is still largely unwritten from a production and use perspective. Beginning next spring, farmers across the United States will have the opportunity to purchase and plant the traited varieties being offered by about 10 different seed companies. Some, such as Croplan Genetics and DuPont Pioneer, will be marketing a couple of varieties for 2017 seedings. Though there is still a lot of “hay to make” concerning the HarvXtra story, Chapter 1 is mostly scribed and that’s what we’ll examine here.

How we got here

In 2002, three research and development entities formed a partnership to develop a reduced-lignin alfalfa using biotech techniques. Scientists from The Samuel Roberts Noble Foundation, the U.S. Dairy Forage Research Center, and Forage Genetics International (FGI) comprised the consortium that discovered and executed the process whereby several lignin pathways in alfalfa were suppressed. From there, it became a matter of determining the most effective gene to “knock out” that would both reduce lignin content and change its composition without compromising other beneficial agronomic characteristics.

The process of incorporating the lignin-
suppressing gene into multiple elite breeding lines fell to FGI. Additionally, lines were tested for their agronomic merit and studies documenting both yield and forage quality were initiated. In late 2014, USDA and the Animal and Plant Health Inspection Service (APHIS) deregulated the trait. Beyond the FGI testing, no independent university field studies or on-farm testing occurred until 2015, 13 years after the formation of the original development partnership.

Based on FGI research trials, the marketing claims for HarvXtra are 10 to 15 percent lower lignin and 10 to 15 percent higher neutral detergent fiber digestibility (NDFD). To be sure, the magnitude of such a genetic improvement in forage quality has never been previously achieved other than by harvest timing manipulation. The promise is for even greater reductions as future varietal generations are released.

Out to the farms

In the spring of 2015, HarvXtra made its way to farm fields, both university experiment farms and also to 10 selected production fields. At the university level, a coordinated harvest management experiment was planted in California, Kansas, Michigan, Ohio, Pennsylvania, and Wisconsin. Field plots are being cut at 28-, 33-, or 38-day intervals, and a HarvXtra variety is being compared to two conventional varieties. Forage samples are also being harvested and analyzed at three- to four-day intervals beginning on Day 20 of regrowth. The seeding year results (second and third cuttings) were reported earlier this month at the Crop Science Society of America meetings in Phoenix.

Also in spring 2015, 10 alfalfa growers were given a limited amount of seed to plant in a production field. These farms, all located east of the Rocky Mountains, were then able to harvest first-production year fields in 2016 (see related sidebar article).

Based on some of the initial university research results and the limited on-farm experience to date, it appears that HarvXtra does fulfill the forage quality advantage being touted in marketing claims. It’s probably a little early at this point to draw any firm conclusions about agronomic performance simply because of limited field testing.

Last winter, additional HarvXtra-
traited seed was made available for planting; over 50,000 acres were seeded down, and once again all plantings were east of the Rockies to keep the trait out of the export market.

Making the 2016 plantings different is that all of the sold seed was a blend of different HarvXtra varieties rather than unique, licensed varieties. In other words, all of the bagged seed was the same irrespective of what company it was purchased from. This was done because there was not enough seed of any one variety for widespread distribution.

Also established in 2016 were 20 on-farm trials comparing HarvXtra to conventional alfalfa. The seeding-year reduced-lignin alfalfa was harvested, segregated, and stored separately; it will be fed this fall and winter in an off-on-off fashion. Forage intake and milk production data will be collected at the end of the feeding period.

Finally, more university trials were established in 2016. One example is a study at Cornell University that will evaluate a conventional and HarvXtra-
traited alfalfa variety grown in a mixture with meadow fescue, festulolium, or late-maturing orchardgrass.

The spring of 2017 will see the first widespread planting of unique, licensed varieties having the HarvXtra trait; as such, Company A’s variety may be different than Company B’s variety in terms of agronomic performance or even the degree of forage quality improvement. All HarvXtra varieties come packaged with the Roundup Ready trait and associated technology fees ($300 per bag for both traits). They also all have a fall dormancy rating of 4. Growers in the Western states will need to sign a Seed and Feed Use Agreement to ensure the forage doesn’t find its way into the export market.

Of course, the situation still remains that there won’t be any performance evaluation trials from which to make purchase decisions. Those will no doubt come with time. Though it’s rarely a good idea to make variety selections based on a single trait or criteria, there may be little recourse in 2017 if you want to give HarvXtra a try.

Also in 2017, many first-production year fields from 2016-seeded fields will be harvested. These, along with university research trials seeded in 2015 and 2016, will begin to make the picture clearer as to what might be expected from a forage quality and performance perspective.

As we look toward upcoming years, FGI personnel tell us that there will be improved performance and quality in future generations of varieties. There will also be a more diverse portfolio of fall dormancy offerings. From a research perspective, expect to see more agronomic and forage quality evaluation along with feeding trials.

Dependent on other forage and feed ingredients, livestock production responses to feeding HarvXtra alfalfa will no doubt vary, assuming the grower is cutting for maximum quality rather than boosting yield by delaying the harvest time. Factors that influence rumen fill and rate of passage will all come into play.

How will brown midrib corn team with HarvXtra? Will it be possible to raise the amount of forage fed in the diet without sacrificing production, and is that the best approach? These and many more feeding questions still need to be addressed.

The question of quality or quantity is probably the most discussed aspect of using the HarvXtra trait. How many growers will maintain their current schedule and capture the quality benefit or delay cutting to eliminate a harvest but also capture more yield; this remains to be seen. Perhaps some hybrid of two approaches will emerge (keep first cut the same and delay subsequent harvests). It’s likely that until entire alfalfa acreages are seeded to varieties with the HarvXtra trait, there won’t be a lot of self-imposed cutting delays.

Though there is still much to learn about the management and feeding of HarvXtra alfalfa, it is relatively safe to say that the trait does differentiate itself from conventional varieties in terms of lignin content and fiber digestibility. It won’t be an appealing option for everybody, but few new technologies ever are. As is almost always the case, time, research, and on-farm performance will make the HarvXtra crystal ball much less murky.

This article appeared in the November 2016 issue of Hay & Forage Grower on page 8.