First you cut, and then it rains 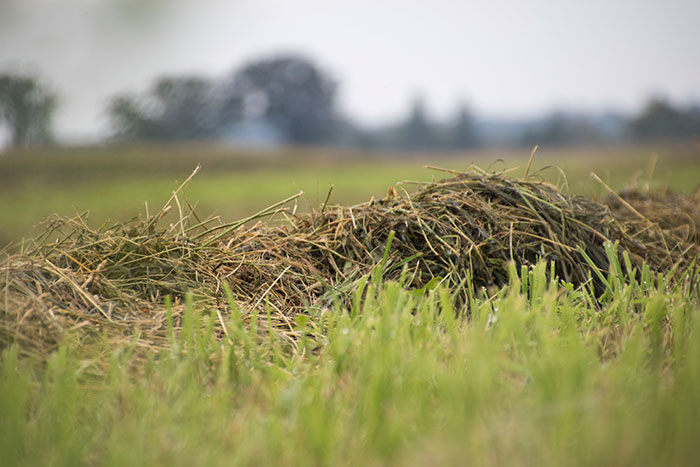 It’s usually a no-win deal. The hay is ready to cut . . . perhaps past ready . . . but there’s a chance of rain over the next few days. So, do you cut and take a chance on the crop getting washed, or do you hold-off and watch the quality decline as it stands in the field?

It’s always a tough call because the only winning outcome is if you cut and the weatherman was wrong about the rain. I guess this is why many hay producers choose the “cut and take my chances” option.

What happens if the weatherman was right? Or worse yet, the 30 percent chance of rain turns into 80 percent for the next five days.

Having the first cutting rained on as it lays helplessly in the field is especially hard to endure because it often holds the greatest potential for high yields and the best forage quality of the season, at least in terms of energy and digestibility.

The phenomenon of rained-on hay has been the focus of many research trials. Knowing how rain impacts the yield and quality of wilting forage will aid in making your harvest and storage decisions.

At the heart of forage quality losses induced by rainfall are plant sugars (carbohydrates). These are assumed to be 100 percent digestible; hence, any loss of these valuable nutrients will have a profound impact on forage quality, specifically the energy content.

Rainfall reduces soluble carbohydrates in two ways. First, there is the direct leaching of sugars out of plant tissues. How much leaching occurs depends on the forage species, the moisture content of the wilting forage, and the amount, intensity, and duration of the rainfall.

Research has shown that an intense, short-duration rain will be more damaging than the same amount of rain that falls over an extended period. It’s also comparatively better (less leaching) to have rain occur early in the wilting process when the forage is still at a high moisture content rather than when it is nearly ready to bale.

The second effect of rainfall on wilting hay is simply that the forage is rewetted, which can reactivate plant respiration and cause additional plant sugars to be lost. Respiration occurs in plants until the moisture level drops below about 50 percent. Rain will prolong this process, or if the hay is below 50 percent, start the respiration process anew.

Rain may also contribute to additional microbial activity that metabolizes soluble carbohydrates. In addition to lower energy content, this also raises the risk for mold and mycotoxins development.

The net result from lost plant sugars by leaching or through respiration and microbial activity is often a higher percentage of neutral detergent fiber (NDF), lower fiber digestibility (NDFD), more ash, and a lower relative forage quality (RFQ). It’s not uncommon to see NDF concentrations elevate by 5 to 10 percentage units when intense or long-duration rainfall occurs.

When forage is being chopped for high-moisture feed, rainfall during wilting may also negate its potential fermentation qualities. This is especially true for alfalfa that has been exposed to multiple rain events over an extended period; in such cases, there are greater amounts of sugars and starches lost that act as substrate for lactic acid-producing bacteria. In such cases, a bacterial inoculant is recommended. Rain-damaged forages are also more prone to clostridial fermentations that yield ammonia and butyric acid as end products.

One final interesting fact about rained-on hay quality is that the crude protein content usually elevates. This is because as sugars are lost, it makes protein a larger percentage of the forage dry matter.

Much of what contributes to forage quality loss from rain damage also results in yield reductions. Those leached and respired plant sugars are lost dry matter. Leaf shatter may also be a contributing factor. Though it may not be caused directly by rain, additional windrow manipulation with equipment is often needed to reinitiate the drying process.

Dry matter losses in rain-damaged hay have ranged from minimal to as much as 34 percent in research trials. As with forage quality, the amount, intensity, and duration of the rain come into play. Heavy precipitation amounts that occur late in the wilting process are subject to the greatest yield losses. Grasses, which are less susceptible to leaf shatter, generally have lower dry matter losses than legumes.

Though not directly related to yield or quality, rain damage also discolors or bleaches the hay. For commercial growers, this can lower the market value of the product.

There are no sure-fire remedies for avoiding rained-on hay while at the same time always cutting on a schedule that maximizes both yield and quality. The end use often determines how much a producer wants to roll the dice on a rain-littered forecast. Though there are multiple websites and smartphone apps that provide ever-improving, short-term forecasts, weather will continue to offer the greatest challenge to most haymakers.

Which rake takes the cake? Next