Cheap seed is not always cheap 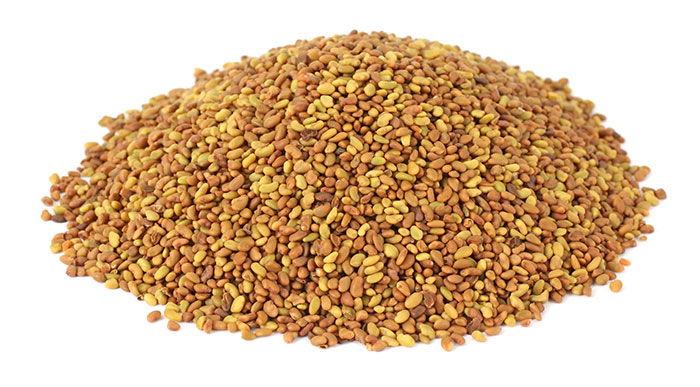 We are now in the epicenter of the seed-buying season, which seems to move earlier with each passing year.

I’ve always found it interesting the reasons why farmers buy the seeds they do. Neighbor relationships, brand loyalty, field trial performance results, and price are all primary criteria for why farmers plant the forage varieties that they do. Oftentimes, it’s only one of these things that is the primary driver.

Though many crop input costs have moderated or come down in recent years, seed has not been one of them. These days, the price gap between premium genetics and the “cheap” stuff has never been wider.

Part of the reason for this gap has been the introduction of genetically engineered traits such as Roundup Ready or HarvXtra. These traits carry with them a “tech” fee on top of the standard product price.

Forage breeders have also developed conventionally bred traits that enhance either agronomic or livestock performance. Examples of the latter might be novel endophyte tall fescue and brown midrib sorghum or corn hybrids.

Forking out the extra dollars for premium genetics, genetically engineered or not, does result in a higher up-front cost. For this reason alone, many farmers make their final decision based solely on seed cost.

Even cheap seed generally grows forage, but that sort of misses the point. Premium genetics and traits come at a higher cost because of (hopefully) proven plant or animal performance. But let’s back up a little and look at the “real” cost of seed in a crop enterprise, specifically a perennial forage.

We’ll use alfalfa as an example, which falls between an annual and a long-term perennial. Let’s assume we keep an alfalfa stand for three years after the seeding year and harvest 14 tons of dry matter per acre over the course of the four years.

If we seed 18 pounds of seed (including coating) per acre, every $1 per pound we pay for seed accounts for about $1.30 of our per ton production costs. The point is simply that seed costs, when spread over the life of a stand, are a very minimal component of production costs compared to other expenses involved.

Legitimate premium genetics brings with it improved performance. To pay for $1 per pound of higher seed cost, we only need to capture an additional 0.12 ton per acre over the life of the stand, assuming a conservative $150 per ton of dry matter value. This amount of yield boost is often captured in one cutting. Premium plant genetics generally is the gift that keeps on giving.

Agronomic (yield) performance is one thing, but animal performance in the form of more milk or meat is where premium seed genetics becomes pretty easy to justify. Over and over again, we see studies of improvements in average daily gains of beef animals by 30 to 50 percent with novel endophyte tall fescue. Pencil-out that economic advantage relative to seed cost of Kentucky 31 versus an improved tall fescue variety. It’s a pretty easy call if you’re establishing a new stand.

Perhaps the current extreme seed price example for a livestock performance trait is that of HarvXtra alfalfa, which also comes with the Roundup Ready trait. The added technology fee for HarvXtra is $160 per bag, or $3.20 per pound of seed (with coating). In our previous example, using a stand-life yield of 14 tons of dry matter per acre, this calculates to $4.11 per ton of additional production cost, an important number to calculate if you’re a commercial hay grower.

If you already grow a Roundup Ready alfalfa variety, which many do, how much milk is needed to pay for the additional HarvXtra trait even if no additional alfalfa yield is realized?

Let’s assume a Holstein dairy cow consumes 1.5 tons of alfalfa dry matter per lactation. The cow must make an additional $6.17 in milk revenue to pay for the higher seed cost of the HarvXtra trait. At $18 per hundredweight for milk, that equates to only 34 pounds of additional milk (0.1 pound per day) over a 305-day lactation. Based on the research to date, this seems like a pretty high probability of return given the enhanced fiber digestibility of the HarvXtra trait.

At this point, let’s add that the return needed for the Roundup Ready trait, which is primarily an agronomic convenience trait, is about the same as for HarvXtra. An argument could be made that it’s economically harder to justify in some situations.

Here are a few things to keep in mind as you navigate through the current seed-buying season:

1. Cheap seed may grow and cover a field, but it will often cost you dollars in lost production over the long haul.

2. Unlike perennials, annual forages must return seed costs in one year. Still, premium genetics in most instances will pay.

4. Enhanced livestock performance that is generated from improved seed genetics (genetically engineered or not) is generally an easy economic payback if other agronomic traits are close to equal.

5. Seed cost is not always indicative of performance. Make sure there is solid research to back any performance marketing claims about a forage variety or silage hybrid.

Feed analysis — A look at variability Next

Weighing in on bale weights Previous