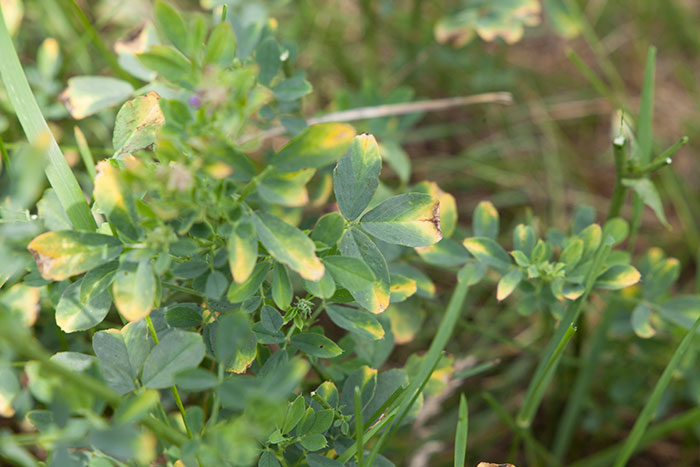 By any measure, potato leafhoppers are one of the most destructive insect pests to alfalfa yield and persistence in the United States. Many alfalfa growers have had bad experiences with the small, bright green insect at some point.

There is perhaps no more dramatic picture than that of one depicting an area where potato leafhoppers were controlled versus an adjacent area where they were not.

“Potato leafhopper is a sucking insect,” says Mark Sulc, Ohio State University extension forage agronomist. “Their pulverizing feeding and injection of saliva blocks the normal flow of nutrients in the plant. This results in plant stunting and the formation of a wedge-shaped yellowing on plant leaflets, often referred to as hopperburn,” he adds.

Perhaps the most important thing to know about potato leafhopper damage to alfalfa is that once the damage is visible, it’s too late to save the yield loss.

1. Spray with a labeled insecticide when economic thresholds of the insect are reached.

“Even leafhopper-resistant varieties need to be sprayed when extreme insect pressure exists,” Sulc says. “Our research suggests that corrective insecticide action is warranted when the number of leafhopper adults plus nymphs collected per 10 net sweeps is three times greater than the alfalfa stem height expressed in inches. That is about threefold less rigorous than nonresistant varieties where the treatment threshold is about equal to plant height,” he adds.

Based on the listings in the National Alfalfa & Forage Alliance’s Alfalfa Variety Ratings booklet, there are currently seven alfalfa varieties being marketed with an HR rating (high resistance) for potato leafhopper. All are Fall Dormancy 5 or below.

Cornell’s Hansen notes that potato leafhopper-resistant varieties aren’t for everybody. The most yield benefit, which can be significant under heavy insect pressure, will be where:

• No scouting program is implemented.

• The harvest interval is greater than 35 days.

• Insecticide application cost is not justified.

• The grower is raising organic crops.

Potato leafhopper-resistant varieties may not fit for all management styles, but they can pay big dividends in the right situation. When choosing a variety, be sure that the performance is going to be similar to that of top nonresistant varieties when leafhopper pressure doesn’t exist.