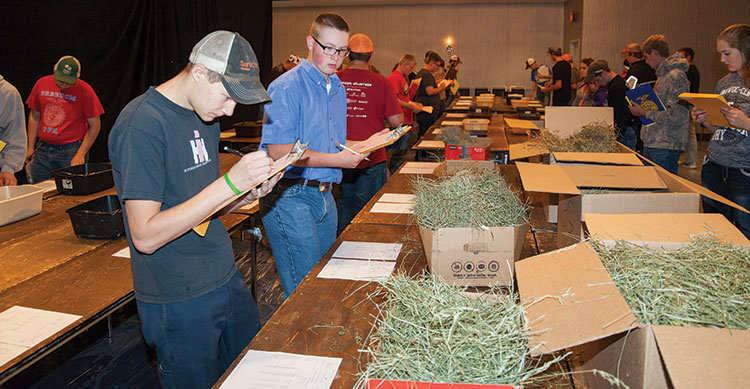 Six forage classes of four samples each are placed in ranking order by participants in the forage contest.
It’s a hard contest.”

Baxter’s assessment wasn’t as a participant in the contest. Rather, he’s a professor in soil and crop science at the University of Wisconsin-Platteville and assumes superintendent duties for the event. It’s a duty he’s held since 2003.

“I pull some of the questions for the written test directly from our college exams,” Baxter said. “It’s tough.”

To be sure, walking into the area where the contest takes place is a bit intimidating, even for the most grizzled forage-producing veteran.

There’s table after table designated for test taking. Walking on the other side of a set of room dividers unveils rows of tables with plates of seeds and plant mounts. The final area is lined with classes of dry hay, haylage, and corn silage waiting to be properly placed from first through fourth.

Last month, nearly 40 teams and 144 total participants vied for the title of World Forage Management Cup champion. Give these kids credit; taking the equivalent of a forage management ACT test is not what many would choose to do on a day off from school.

Most of the participating teams are from Expo’s home state of Wisconsin, but there are also out-of-state contenders. This year, teams from Missouri, Illinois, and Iowa made appearances and each of these states had a team that finished in the top 10 overall.

The two-hour-long World Forage Management Cup challenges a person’s “book” knowledge as well as their aptitude for practical application. Participants have 40 minutes to complete each challenge of the forage triathlon. The written test is 60 multiple choice questions with inquiries spanning a wide range of forage management topics.

Prior to the event, FFA advisors are sent a list of about 100 forage species and weeds from which participants will need to be able to identify both the plant and seed. Sixty total plant, weed, and seed specimens comprise the identification portion of the contest. The participants are given the full list of species to choose from as they mark their answers.

Next comes forage judging. Here, participants are asked to place six classes of forage comprised of four different samples each. The students can feel and smell the forage and are also given the laboratory forage analysis of each sample. As a result, the ability to assess a forage quality test and determine the test metrics’ relative importance is paramount for receiving a competitive score.

Having taught at two different high schools in his career, Paul Marshall currently acts as the FFA advisor at Riverdale High School in Riverdale, Wis. He explained, “I’ve had a lot of kids who participated in this contest who have gone on to be leaders in the industry and very successful in their lives.”

Marshall said that they push hard in agronomy and soils, practicing for the contest three weeks in advance. “We collect plant mounts and the kids bring in hay samples that we use for practice judging. Forage quality makes or breaks the industry,” he added.

The advisor’s tutelage has paid off. Riverdale won the contest in 2016 and placed second the three previous years. This year, his team of three female students again finished second overall.

Linda Sattler has been bringing teams to the contest for 18 years. She’s the FFA advisor at Laconia High School in Rosendale, Wis., and brought an experienced group to the event in 2017. Earlier in the year, Laconia had won the state FFA-sponsored agronomy competition. 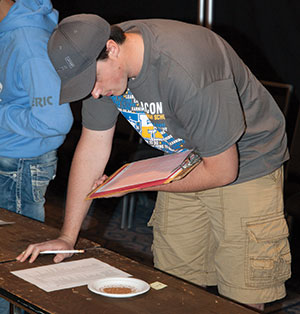 Brady Madigan, Laconia FFA (Wis.), ponders the identification of a seed type. Madigan would go on to finish eighth overall in the contest. His team finished third.

Brady Madigan, a senior at Laconia, has participated in the contest for the past three years. It’s in Madigan’s blood as his dad is an agronomy specialist and sales manager with a large co-op. He plans to attend college and major in agronomy. Though Madigan told me prior to this year’s event that he likes the forage judging and plant identification portions of the contest, it was the written exam where he really excelled, achieving a contest high of 96 percent. He finished as eighth-high individual in the contest.

One of Madigan’s teammates, Keegan Bruins, works on a dairy farm and was a member of his chapter’s winning agronomy contest team earlier in the year. He finished as the fourth-high individual overall and was in the top 10 for both the written exam and the forage judging. As a team, Laconia finished third overall in the contest.

Shea Esser is the FFA advisor for River Ridge High School located in southwest Wisconsin. “I competed in the World Forage Management Cup when I was a student,” he noted. This year, River Ridge’s Blake Wegmuller finished second overall and first in the forage judging, while the team nailed down a very respectable fourth-place final placing.

“I participated on our team last year and learned a lot about different crop pests and forage quality,” said Wegmuller, who lives on a small beef and crop farm. One of his teammates, Matt Walz, finished 16th overall. Walz has his own custom harvesting business for corn and soybeans, while his brother does custom forage harvesting.

While meandering around the students prior to the contest, I sought out the group that had driven the farthest to compete. That distinction went to the team from Halfway, Mo. The town of Halfway is located north of Springfield and “halfway” between Bolivar and Buffalo; its population is listed as 173. 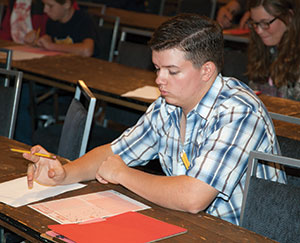 Andrew Covert, Halfway FFA (Mo.), thinks through a question on the written test. Covert finished as high individual in the contest leading his team to first place overall.
I found the team sitting against the wall. The unofficial captain, senior Andrew Covert, is from a beef operation where his family also harvests and sells hay. The soft-spoken Covert said that he planned to attend the College of the Ozarks and major in agronomy. “Forages are a big part of what we do,” Covert added.

Another member of the Halfway FFA team was senior Michaela Higgenbotham. She had previous experience participating in their state’s FFA agronomy contest and lives on a beef farm where they also make hay. Rounding out the team from the Show-Me State was sophomore Carli Cable, a first-time competitor. “I like plants,” said Cable, whose family has a beef feedlot and also produces hay.

Once the dust settled and the final tallies were known following the contest, it was this trio from Halfway FFA that rose to the top, and they did it by a fairly wide margin. Covert was the top individual, while Higgenbotham placed third overall. Cable, the newcomer, placed a very respectable 12th.

As a team, Halfway won both the forage judging and identification portions of the contest, while finishing fourth overall on the written exam. Covert and Higgenbotham finished one-two in plant/seed identification. In placing the forage classes, Covert finished third among all contestants, while Cable came in eighth.

Forage crops and their management are often viewed as a secondary enterprise both on the farm and in the classroom, especially to high school students who are understandably more enamored by big combines and first-place heifers. However, the World Forage Management Cup contest is singular in its ability to bring the complexities of forage production front and center to the future agricultural leaders who participate.

The corporate sponsors and organizers of this event, including the University of Wisconsin-Platteville Agronomy Soil Conservation Chapter, World Dairy Expo, and Dairyland Laboratories Inc., are to be commended for their efforts. Though most of the participants are entered as FFA teams, the contest is open to any agricultural youth group (for example, 4-H) with students in the seventh through 12th grades.

This article appeared in the November 2017 issue of Hay & Forage Grower on pages 38 and 39.