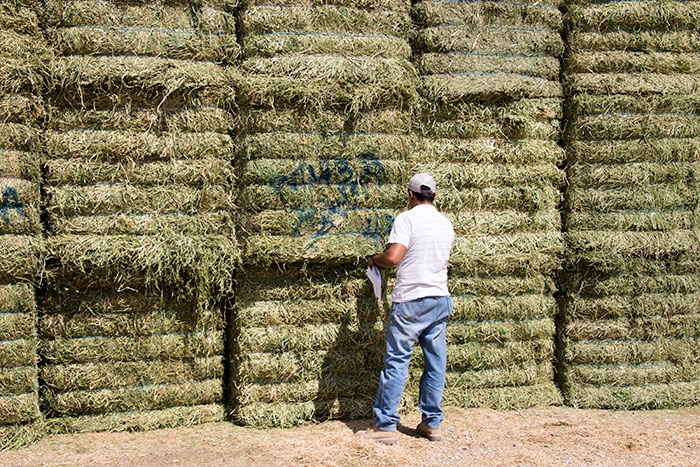 “We need to think about alfalfa as a package of nutrients,” said Bill Weiss, Ohio State University Extension dairy nutritionist. “As such, the value of that alfalfa (or any forage) should reflect the value of the nutrients provided.”

Perhaps most buyers and sellers of hay already think this is being done, but Weiss takes it to another level. He shared his thoughts on valuing hay at the Western Alfalfa & Forage Symposium’s Hay Quality Workshop held in Reno, Nev.

“Cows don’t need to be fed alfalfa,” Weiss bluntly said. “We can get lots of milk and never feed a stick of alfalfa. You’re producing alfalfa to compete with other feeds. Instead of saying cows need alfalfa, we say cows need nutrients; they need energy, protein, minerals, and fiber. If cows didn’t need fiber, there wouldn’t be a speck of alfalfa produced. Rather, we’d feed corn and soybean meal just as we do with chickens and pigs,” he opined.

In making the calculation, Weiss noted that not all protein is created equal and that CP should not be used to compare feeds. Rather, he recommended using metabolizable protein (MP). For alfalfa, only 55 percent of the CP is considered MP. By comparison, soybean meal has 70 percent of its CP as MP.

According to Weiss, there’s still an issue with this approach if we stop here.

“The problem is that such an approach ignores the effect of forage quality on milk yield,” Weiss said. “Fiber has value, but too much depresses intake and milk production. That said, we need to adjust the nutrient value of hay to account for the NDF level and its effect on milk production.”

Weiss offered an example using a base NDF level of 44 percent and milk priced at $17 per hundredweight (cwt). For every percentage unit lower than the base, the value of the forage is increased by $4.75 per ton. Conversely, the price declines by the same value if NDF levels exceed the base of 44 percent NDF. This unit change is dependent on milk price; for example, at $22 per cwt., the unit change in hay price bumps to $7 per ton for every percentage unit change in NDF above or below 44 percent. 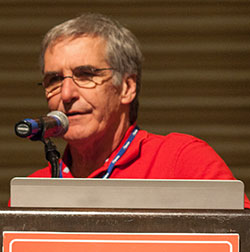 Bill Weiss
“Valuing nutrients and adjusting for fiber concentration is a fair way to sell alfalfa; however, the market doesn’t do that,” Weiss said. “Rather, it’s very much sold on indexes such as relative feed value (RFV) and relative forage quality (RFQ).”

The nutritionist reminded the audience that RFV is basically the same as fiber concentration. “Relative forage quality is more useful, accounting for fiber digestibility and ash,” Weiss said. “Both of these factors are important.”

Weiss noted that CP percent is correlated to RFV and RFQ, but it’s a weak relationship with a high amount of variability.

“Somehow we have to build protein into the pricing equation because protein has value,” Weiss stated. “This is especially true today when alfalfa comprises a smaller percent of the ration than it did years ago.”

Weiss proposed an equation whereby RFV and RFQ are adjusted for protein. The first step is to calculate the deviation from the expected CP percent at a given RFQ. Next, adjust the RFQ. His proposed equations are as follows:

For example, an alfalfa with an RFQ of 160 and 19 percent CP would have a CP-adjusted RFQ of 152. It’s lower because we would expect a 160 RFQ alfalfa hay to have a higher CP content than 19 percent.

“Where we’ll eventually get to is that all this (component-based pricing) will go away and we’ll just be able to directly predict milk production,” Weiss said. “With the statistical methods we have now, this is possible. We just need a lot more data, but it’s coming,” he predicted.

Weiss ended with this thought: “Most of the studies involving these various measurements and animal responses were done with a lot of alfalfa in the diet. The quality parameters probably become less important when we’re feeding 5 pounds of alfalfa in the diet compared to 25 pounds. At lower inclusion rates, fiber should have more value.”

Here's how Saudis turn oil into milk Next