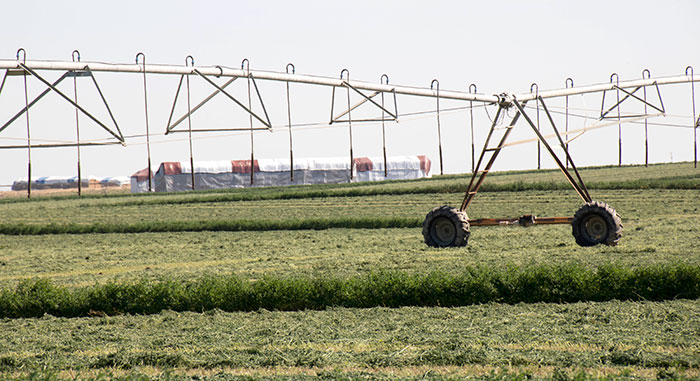 Center pivot irrigation hasn’t been left behind in the march toward more site-specific field management.

Here are some of the key points he made about each of the two potential variable rate irrigation options that are currently available to producers.

• Does not require additional pivot hardware.

• Uses a more sophisticated control panel to slow down or speed up pivot travel, applying different amounts of water based on travel rate. The overall pivot flow rate remains constant.

• Rates can only be adjusted in pie-shaped wedges.

• Most new pivot control panels already have this capability, but there are also third-party add-ons for older units.

• Encompasses the ability to vary pivot speed and also vary the application rate along the pivot lateral. Combined, this enables for a wide range of applied water.

• The system is much better able to apply water to smaller, defined zones within a field compared to just using variable speed.

• Cost is considerably more than variable speed irrigation alone because additional hardware is needed on the pivot and the control panel is more sophisticated.

Peters noted that variable rate irrigation won’t pay in every situation, but there are some clear advantages where soil variability exists or where multiple crops are being grown under the same pivot. The technology is also beneficial for variable rate fertigation and chemigation.

For Peter’s detailed discussion on the topic of variable rate irrigation, click here.

Best bets for frost seeding Next