Making hay with the ZR5 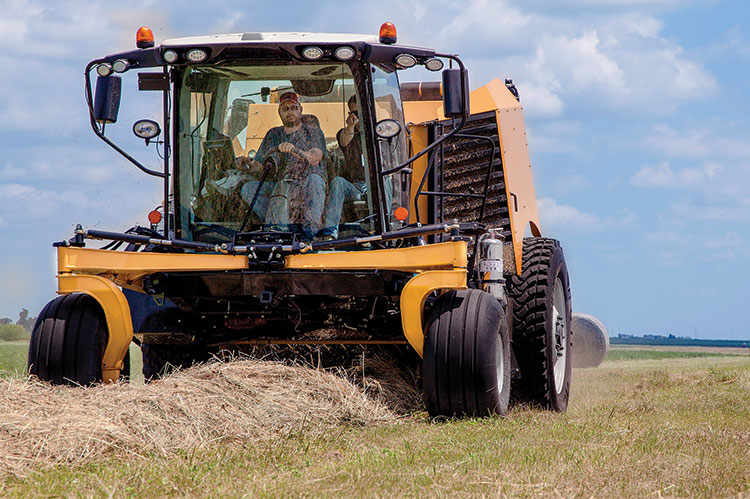 Vermeer’s ZR5 self-propelled round baler was recently put to the test in a grass hay field behind the Vermeer campus in Pella, Iowa.

That thing is awesome,” exclaimed Andy Smidt as he walked over to the temporary shade tent on a smokin’ hot June day in Pella, Iowa.

Smidt had been first up to test-drive a prototype model of Vermeer’s ZR5 self-propelled round baler with zero-turn capabilities. He got that opportunity by being one of two winners in an online contest that garnered 1,100 entries, and he learned quickly that the baler had more capabilities than just zero-turn.

Smidt’s wife, Kayla, who “can drive anything on the farm,” according to her husband, also took a turn at the ZR5 wheel. The Smidts grow and harvest 4,000 acres of pivot-irrigated hay in Trumbull, Neb., along with Andy’s father. The commercial hay producers also grow 2,000 acres of row crops, bale 1,000 to 1,500 cornstalk bales per year, and have about 50 beef cows. 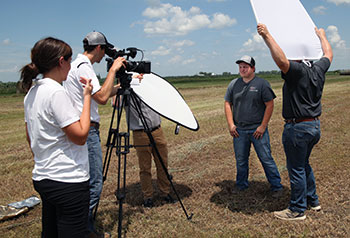 After taking his turn on the ZR5, Todd Holdgrafer offers his impressions to Vermeer’s video crew.
The test track for the ZR5 on that day was a large, late-cut field of grass hay located behind Vermeer’s expansive Pella facilities that resemble a college campus. The hay was well dried and two windrows had been merged into one. These were “big boy” windrows that provided a good test.

“All of my mistakes related to doing too much,” Smidt said of his first test drive. “By habit, I wanted to pull back on the speed control when the machine stopped to net wrap a bale. Tyler said to me, ‘You don’t have to do that.’” Vermeer engineer Tyler Schiferl was the ZR5 co-pilot for the day as the parade of drivers took their turns.

“That first turn at the headland is also a learning experience,” Smidt chuckled. “It only takes a slight movement of the steering wheel to be heading back the other direction.”

In fact, everyone who drove that day made that same initial steering mistake, including yours truly. When my number came up, I nearly did a complete 360-degree pirouette with my first headland turn.

Among the day’s operators, Smidt was the boldest when it came to forward speed. “I took it up to 12 miles per hour,” said the experienced baler after completing his second run on the ZR5.

The other attendees to the ZR5 ride-and-drive were brothers Todd and Brad Holdgrafer from Bryant, Iowa. Collectively, they assumed the role as the life of this bale-making party. The Holdgrafers work on their family’s diversified eastern Iowa farm where up to 8,000 bales of hay and cornstalks are made each year. They also do custom baling for neighbors and feed-out cattle. These two guys were baler aficionados.

“That was a pretty sweet ride,” said Todd, as if he just test-drove a Maserati down the Main Street of a small rural town. “I couldn’t believe how quiet the cab is and really the whole machine. There’s no driveline and fewer chains,” he added.

“The cab’s hydraulic suspension makes for a really smooth ride,” said the elder sibling. “I liked the turning radius and the fact that you can bale a bit faster. I’m really glad I got the opportunity to do this.”

“Yes . . . having to get out of the cab so that you could drive,” Brad retorted with a smile. 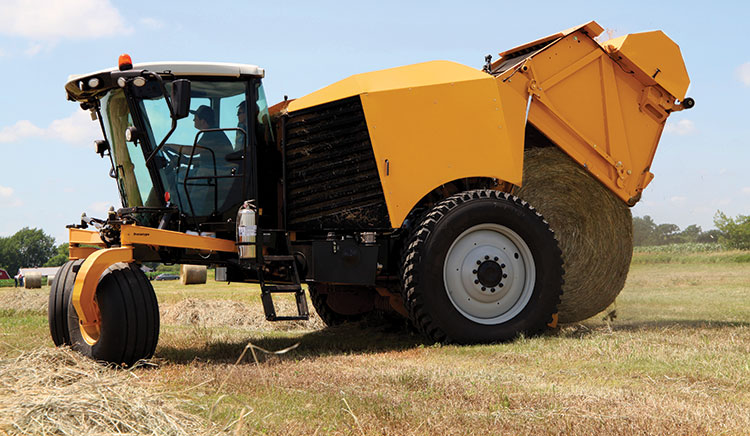 Holdgrafer watches the cab monitor to ensure proper bale ejection. If desired, the ZR5 will automatically rotate a quarter turn (as pictured) before bale ejection. This orients the bales in the same direction for ease of pick up.

Truthfully, I couldn’t wait for the real celebrities to get done driving so that I could set down my camera and take the wheel. Engineer Schiferl gave me the quick run through on the controls; he was getting good at this by the time I assumed the captain’s chair.

All of the previous drivers from that day were right: The ZR5 was smooth, responsive, and essentially hands-off. It was much like sitting in the cab of a forage chopper. Other than steering and speed control, the ZR5 did the rest — at least in automatic field mode. Once the bale chamber was full, it stopped automatically, then wrapped and ejected the bale.

By the way, with the push of an on-screen button, you can have the ZR5 automatically make a quarter turn to the right or left before bale ejection. This orients the bales in a straight line for easier pick up from the field. Once ejected, the baler automatically quarter turns back on the windrow and away you go with the touch of a “go” button that is located on the speed control.

The ZR5 is equipped with two cameras. One is located underneath the cab and directed toward the pick up head; the other is in the rear and allows you to see that the bale was properly ejected. The monitor in the cab switches between the two camera shots depending on whether you are moving forward or if the tailgate is opening.

Of course we were in field mode while baling, but the ZR5 can be put into a travel mode for going down the road. For this, the front caster wheels lock hydraulically and are used for steering. The ZR5 can travel down the road at speeds up to 34 miles per hour.

It was 1948 when farmer Gary Vermeer hung a sign on the door noting that Vermeer Manufacturing was open for business. Over 20 years later, in the early 1970s, one of Vermeer’s farmer friends was complaining about how hard it was to put hay up for his cows. Not one to step away from a challenge, the inventor went to work in search of an easier way.

He had specific goals in mind for a new baler: It had to be a one-man operation, the machine had to produce bales weighing about a ton, and the bale needed to be wrapped tight enough to shed water. Vermeer and one of his engineers diagramed the first prototype large round baler on a chalkboard. A facsimile of the diagram can be viewed in the Vermeer museum at the company’s Pella facility.

Though the size of those first bales ultimately proved limiting, it wasn’t long before large round balers became a common sight in farm fields. The crude design that Vermeer crafted on that chalkboard was the basis of large round balers for many years to come. Of course, there have been numerous improvements and added technologies since Gary Vermeer’s initial prototype, and the ZR5 looks to be the newest chapter in this continuing saga.

Kent Thompson is a big fan of zero-turn lawnmowers and their efficiency. He’s also an engineer and the research and development manager at Vermeer, a position that at any company requires an out of the field boundary thinker. It was Thompson who engaged his colleagues in discussions about the concept of a self-propelled round baler.

One of those people he had to convince of the idea was Mark Core, executive vice-president and chief marketing officer at Vermeer.

The morning following our day of baling, I sat down with Thompson and Core to get the story on how the ZR5 went from concept to hayfield.

“Kent just kept challenging us about the productivity advantages of zero turn technology in a baler and we discussed the potential kinds of intelligence that could be put into a system where the power plant and baler are fully integrated,” Core explained.

One of the factors that got Thompson thinking about the concept was that many of Vermeer’s customers were bemoaning the fact that good labor was hard to find and keep. These days, all of the company’s new offerings are designed with labor-savings and efficiency in mind for the end user.

“The evolution of harvesting equipment has gravitated toward self-propelled machines,” Core noted. “We think family members are going to fight over who gets to run the ZR5.”

The birth of the ZR5 came about quickly. “Our group first pitched the idea to the board in January 2015,”
Thompson said. “In September, we started designing, and we had our first concept machine built by the end of the year. At that point, we just wanted to prove it out to see if it even made sense,” he explained.

According to Core, one of the advantages of an integrated system is that there’s the opportunity for each
function of the baler to operate at its optimum speed based on changing conditions. The baler systems are no longer dependent upon the power-takeoff (PTO) speed coming from the tractor. Most mechanisms on the ZR5 are hydraulically driven.

“The baler itself will perform similar to our pull-type baler,” Core said. “At this point, the ZR5 is equipped with a very similar baler to the current Vermeer 605N Cornstalk Special. It can be modified to do high-moisture hay with a special kit. We would anticipate that sometime in the future customers will be able order the ZR5 with some of our different baler types,” Core added.

The company plans to sell about five units this fall and get them out in the field, and then ramp up production and marketing next year. “We’ve had good success with the limited-launch strategy on most of the machines we build,” Core said. “It allows us to identify any opportunities for improvement and helps from a manufacturing ramp up standpoint as well.”

Vermeer has already made one major change to the initial-launch prototype. Early-testing users indicated that the cab was so comfortable and the ride was so smooth that it made baling at faster speeds possible. As such, Vermeer’s engineers found that more horsepower was needed to meet the demands of the baler at those higher speeds, especially on steep inclines. Now, the ZR5 has a 200 horsepower Cummins diesel engine, replacing the original 173 horsepower offering.

As for price point on the ZR5 — there was no determination on that as of mid-June, but we should know soon.

Core concluded by saying, “Vermeer, with its industrial divisions, has a high level of expertise with engines and hydraulics. Though we haven’t had to use that with our PTO-driven hay harvesting machines, it certainly came into play in a big way with the development of the ZR5.”

It’s too early to determine what the future of self-propelled balers may hold. We can speculate that it might be pretty good if the same path is followed as that of the swather/mower and forage harvester. As for one Nebraska couple and two eastern Iowa farm boys . . . well . . . they got sold on the concept during a hot June day. 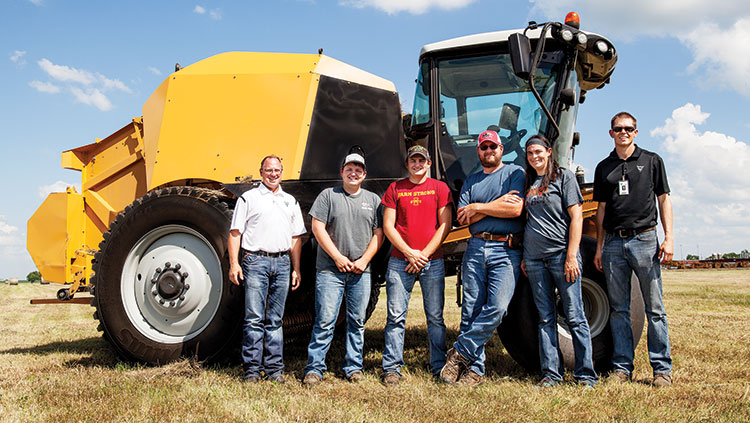 Tedders have value in all situations Next

Checking the view from above Previous