Haystacks are home to profit loss

By Glenn Shewmaker
The author is an extension forage specialist with the University of Idaho based in Kimberly.

We have all seen the effects that weathering causes when hay is stored outside. Most of the deterioration is on the outer layer of the bale and particularly where it rests on the soil. However, rain and spoilage will usually travel two to three layers deep with rectangular-shaped bales, regardless if they are two-string or 4 by 4 by 8 feet bales not stored under cover.

These losses are dependent on the amount of rainfall, temperature, length of storage, and ability of the bale to shed water. Losses with large bales stored outside on the ground are about three times greater than with bales stored inside. Several factors affect the storage and preservation of high-quality hay: forage species, maturity, harvest management, and storage strategies. The weathering effects of sunlight, heat, and precipitation can all be controlled with preservation materials and proper storage management.

Hay loses weight (mass) and degrades in quality with the passage of time. The magnitude of storage losses is not well recognized by hay producers due to the difficulty of measurement. Harvested hay must be stored properly to minimize further degradation. Even in barn storage, shrinkage during several months is typically from 5 to 10 percent weight loss from fresh-baled hay. About 5 percent is in dry matter while the remainder is in moisture loss.

Hay moisture will stabilize in summer at about 10 percent in arid climates, and about 15 percent in humid climates. I have measured the external surfaces of bales on sides of stacks at 19 percent moisture during winters in Idaho.

I decided to document the changes in an arid Western environment. The effects of several months of storage for hay was studied in 2013 to quantify changes in forage quality parameters. This report provides preliminary information about the magnitude and causes of hay losses in storage and how management can minimize the losses. These first data sets will be supplemented with results during subsequent years.

At least two haystacks of first- through third-cutting alfalfa were sampled monthly by coring 10 bales on each side of four haystacks at chest height. Cores from five consecutive bales were composited as one replication, thus four replications per stack. We took samples with a Star Quality Probe (0.5-inch diameter) to a depth of 14 inches in the butt end of bales. This was done soon after baling and stacking, and then monthly until the stack was gone. Subsequent cores were extracted from the same bales about 6 inches from the previous core.

What error is expected for sampling and forage quality analyses?

Initial stack moisture concentrations in 2013 were all below 8 percent, probably because of very dry baling conditions and limited precipitation during most of the storage period. Crude protein did not change in most stacks. A small amount of crude protein was likely degraded, however, since the soluble carbohydrates (sugars and starch) are used by microbial respiration, acid detergent fiber (ADF) and lignin increase in concentration. Although the absolute amount of protein may decline a little, the loss of total dry matter results in a slightly higher concentration of crude protein.

The ADF jumped from 2.7 to 5.3 percent from the initial sampling to the final sampling times across all hay types. The change in neutral detergent fiber (aNDF) was more inconsistent in the four stacks we tested. The relative feed value (RFV) index did not change in one stack, but declined by 14, 21, and 11 units in the other three alfalfa stacks. 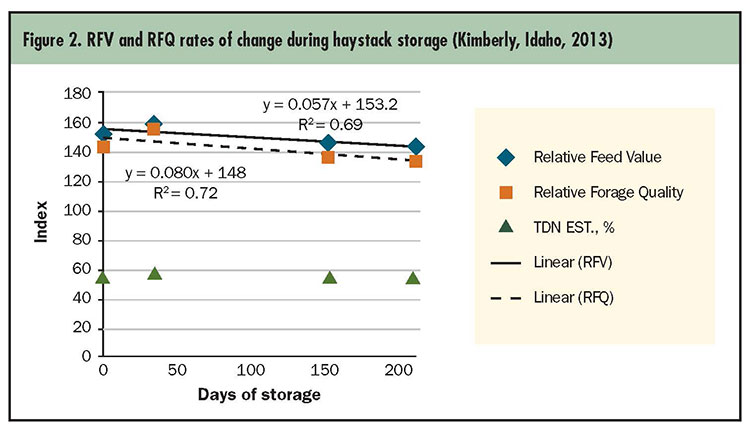 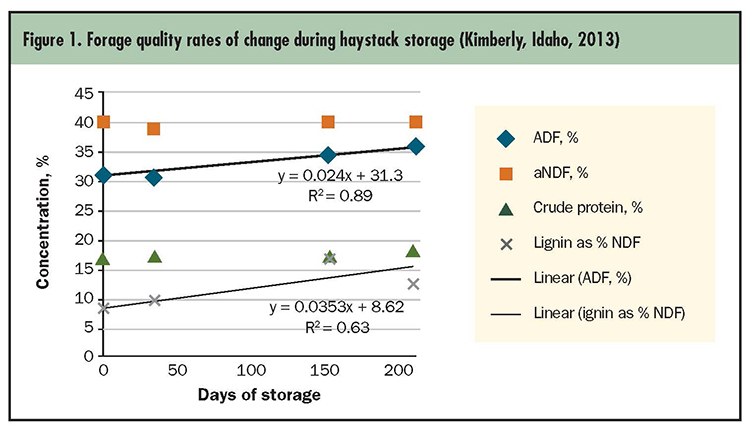 We also examined the rate of forage quality decline. The first-cutting alfalfa stack showed some consistent trends among the measured parameters (Figure 1). The crude protein and NDF did not change significantly, but ADF slowly climbed with each day of storage. In fact, the number of days of storage explained 89 percent of the variation in ADF conditions. If barn or shed storage is not available, place haystacks in sunny, breezy locations, on an elevated pad of rock, and cover stacks with tarps. Well-formed, tight bales, and the proper moisture content will minimize storage loss.

The best situation for marketing hay is to sell the hay in the field at its highest quality and pass the storage and management costs on to the buyer. If a grower wants to speculate on a rising hay market, one must consider the added storage costs of dry matter and quality loss, realizing that these can be considerable.

This article appeared in the November 2018 issue of Grower on pages 14 and 15.

My experiences with alfalfa-grass mixtures Next

Set yourself up for alfalfa winter survival Previous