My experiences with alfalfa-grass mixtures

By Matt Lippert
The author is an agriculture agent with the University of Wisconsin-Extension in Wood County and is involved in his family’s dairy farm. 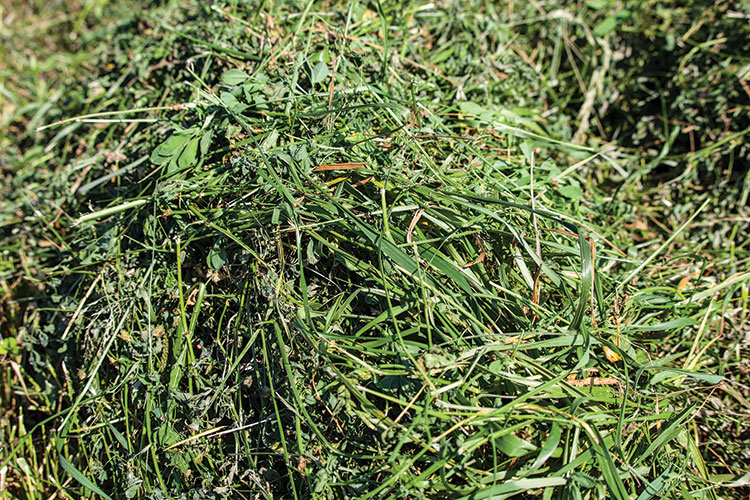 Throughout the United States, a lot of alfalfa is grown with grass. This is sometimes done by design, but other times it occurs unintentionally. In some areas, grass is very well adapted. It is less prone to winter damage, although this past winter we found that grass, too, can die over winter.

There has been expanding interest in growing grass in alfalfa mixtures. Why? Especially on fields that are variable, yields can be higher and more consistent with grass. Grass, if harvested at the right stage, will have higher fiber digestibility than alfalfa. Typically, it will dry down faster for haylage or hay.

Since there has been more interest, my family’s dairy has dipped its toe into the grass-growing pool, but we have found grass is not without its challenges. Growing multiple species at the same time will always be more complicated. Hardly ever will the fertility needs, harvest requirements, and other management considerations be identical for both species.

What are some of the hazards that can be found along the alfalfa-grass mixture road?

Here are some of the things we’ve found to be important and some issues we’ve encountered.

Cut for the grass

Conditions at planting affect the ratio of alfalfa to grass that will establish, even if the same seeding rate is used from year to year. Dry conditions will tend to favor the alfalfa, while wetter years will allow the grass to dominate. You never know for sure what you will get until it comes up, and even then it’s best to wait until it goes through a winter. If you like predictable results, pure stands may be the choice for you.

Fescue, orchardgrass, timothy, and smooth bromegrass are not created equal. In general, grass matures faster and moves out of quality faster than alfalfa; look for later maturing varieties within a species. Also, look for varieties selected for forage quality; a reason why grasses once moved out of favor was the challenge with quality. Some grass plant genetics are simply not suitable to feed to lactating dairy cows.

Some species play nicer together. Tall fescue has been appreciated as a tough, high-yielding species, but it may not be the best choice to grow with alfalfa. Rather, consider meadow fescue; we’ve found that it’s a species that offers similar yields, is less competitive, and has much higher forage quality.

Use a different gauge stick for when to cut mixtures as compared to straight alfalfa. To optimize yield and still have dairy quality, you need to cut when the alfalfa is less mature than you would when just managing alfalfa alone. The saying “When you see the head, the quality is dead” is very true.

Some grass species only develop a seedhead once per year, but even in subsequent cuttings when no seedhead is present, the grass will decline in quality more quickly than the alfalfa. This means alfalfa stand longevity may suffer by cutting earlier to achieve grass forage quality. An earlier cutting will result in lower yields per cutting and higher harvest costs. Finally, you need to cut grass higher; it doesn’t have crown root reserves and needs adequate leaf area to recover in the field.

Soil fertility is more complicated with an alfalfa-grass mixture; this is especially true for potassium. Alfalfa has a deep taproot, which offers drought tolerance. Grasses have a dense, fibrous root system. If potassium is limited, the grass is going to win because it extracts potassium more efficiently. If the alfalfa struggles, you may decide to manage the mixture for the grass by applying nitrogen, which will further nudge the advantage to the grasses over the alfalfa.

Alfalfa and grass don’t have to be grown in mixes. You could seed pure stands of grass and alfalfa, then mix the two forages in a total mixed ration (TMR). Rye and triticale have become more popular in recent years; these are added to the ration as pure grass. Perennial grasses can be managed this way to avoid the problem of feed variability.

There are many potential advantages of adding grass to the ration over alfalfa alone. There is a possible yield advantage and better resiliency against adverse conditions. Fiber digestibility may be improved, but total fiber may go up. As with other practices, continuous tweaking and experimentation will be needed to find the “sweet spot” for each individual farm.

This article appeared in the November 2018 issue of Grower on page 25.