Your reminder for evening hay feeding 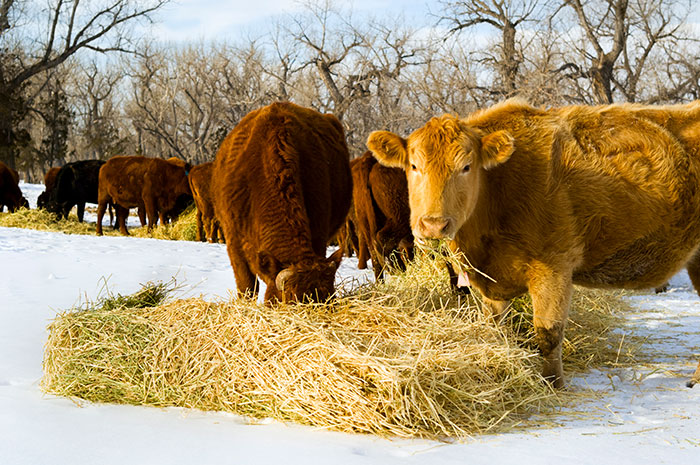 It makes a difference when you feed hay to a soon-to-be-calving beef herd, and each year Glenn Selk reminds us of this fact.

Selk, an emeritus animal science professor at Oklahoma State University, notes in a recent Cow/Calf Corner newsletter that supervision of the calving herd pays dividends in the form of live calves delivered and reduced calf mortality, especially for first-calf heifers.

Supervision during daylight hours is a whole lot easier than it is at night.

“The easiest and most practical method of inhibiting nighttime calving at present is by feeding cows at night; the physiological mechanism is unknown, but some hormonal effect may be involved,” says Selk.

A more substantial study was conducted on 1,331 cows across 15 Iowa farms. Fed once daily at dusk, 85 percent of the calves were born between 6 a.m. and 6 p.m.

Selk also points to research conducted by researchers at the Kansas State University Agricultural Research Center in Hays, Kan. In this study, scientists spent five consecutive years recording the time of calving (to the nearest half hour) of their herd of spring-calving, crossbred cows. Forage sorghum hay was fed daily between 4 p.m. and 6 p.m. The results were as follows: 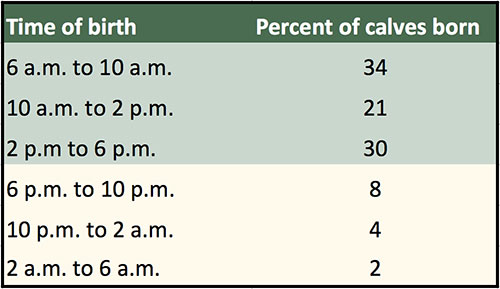 “It is interesting to note that 85 percent of the calves were born between 6 a.m. and 6 p.m.," Selk says. “This is very similar to Iowa data when cows were fed at dusk.”

“Records at Oklahoma State University indicated that when cows had constant access to large round bales but were fed supplements at about 5 p.m., 70 percent of the calves were delivered between 6 a.m. and 6 p.m.,” Selk adds.

Although evening feeding may not eliminate checking heifers at night, Selk suggests it should translate to more live calves on the ground.

Will alfalfa hay feeding rebound on California dairies? Next