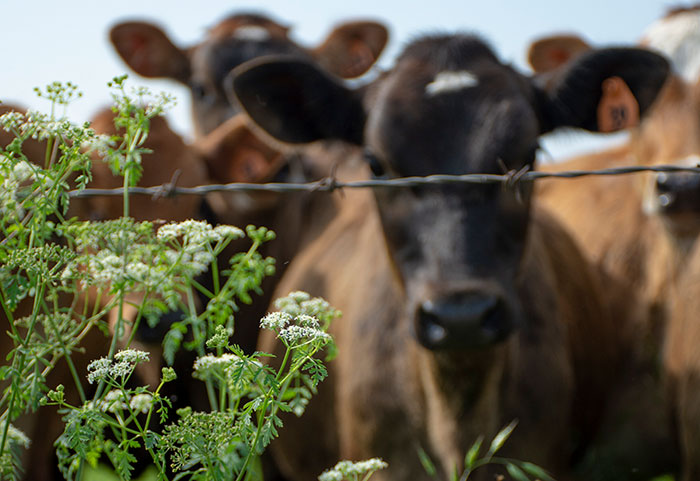 It’s been taking numerous regions of the U.S. by storm and, in many cases, nothing is being done to stop the invasion. Once an occasional nuisance, poison hemlock has officially become a major pest, and it’s one that is deleterious to livestock if ingested at high enough amounts.

A biennial member of the parsley family, poison hemlock can grow up to 6-feet tall, according to Jeff Graybill, Penn State agricultural extension educator based in Lancaster.

“This weed has been expanding to new regions in the state and its growth has become more aggressive,” Graybill says in a recent blog post. “The weed can be found growing in fallow areas, fence rows, pastures, roadsides, and creek sides.”

The toxicity of poison hemlock is well documented. Graybill notes that all parts of the plant are poisonous, but adds that the mature seeds carry the highest toxin concentrations.

The toxic culprits in poison hemlock are pyridine alkaloids, the primary of which is coniine.

Poison hemlock also holds a dubious place in world history. It’s been thought that the Greek philosopher Socrates was killed in 399 B.C. by drinking hemlock tea.

Unfortunately, livestock can meet the same fate as Socrates if they ingest too much of the weed.

“Some studies have shown toxicosis at 0.25 percent fresh weight (of the animal’s weight) for horses and 0.5 percent for cattle; that would be 2.5 to 5 pounds of material per 1,000 pounds of liveweight,” Graybill explains. “Significant poisoning can result in muscle paralysis and suffocation,” he adds.

Poison hemlock has finely divided leaves, similar to wild carrot (also known as Queen Anne’s lace). Purple spots can often be found on the stems and the plant itself carries a somewhat musty smell.

In its first year, poison hemlock develops a basal rosette of leaves. During the second year, a vegetative stem and flowers form. The flowers are white and arranged in a compound umbel pattern.

Poison hemlock seed production is prolific; each plant has the capacity to produce up to 38,000 seeds.

“Take care when eradicating the plant by hand,” Graybill writes. “Wear gloves and protective clothing. Contact with the skin has been known to cause irritation for some people.”

Poison hemlock can be easily dug out of the soil using a shovel, but for larger infestations, an herbicide application may be needed.

Applications are most effective when made before plants bolt (shoot a stem) in the spring. Herbicide options include 2,4-D plus Banvel, Crossbow (2,4-D plus triclopyr), or glyphosate as a spot treatment.