By Taylor Grussing
The author is an extension cow/calf field specialist with South Dakota State University. She is based in Mitchell. 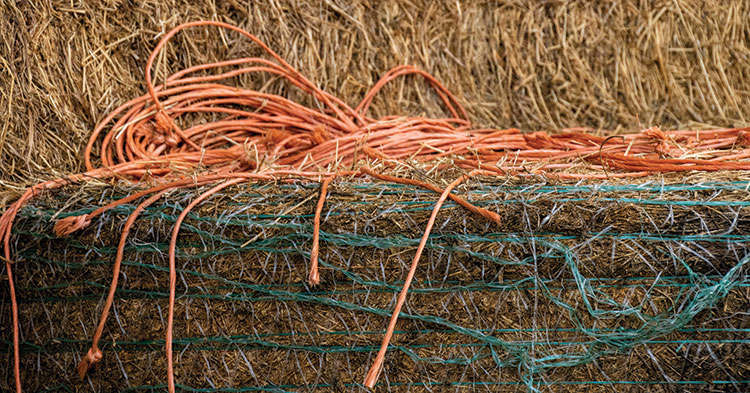 Planning for next winter’s hay needs is a process that should begin now, before the hustle and bustle of summer arrives.

Have you considered the type of hay-binding material you will use?

Usually binding is dictated by the type and kind of baler that you own or use. However, many balers have capabilities for both twine and net wrap, and the decision of which one to use or switch between either can be based on forage type, location, time, or even storage plans (indoors or outdoors).

With advancements in technology, forage binding methods have grown to include a variety of options, including twine, net wrap, and plastic wrapping. Twine has traditionally been the type of binding most commonly used and can be made from plastic, sisal, and polypropylene.

If you have been using plastic twine, it’s likely that you’re still finding it in cattle lots — stuck in the dirt — where round bales have been fed for years. Sisal twine became popular due to the degradability of its fiber. Yet, depending on the year, sisal twine could begin degrading before bales are moved from the field, leaving behind a trail of wasted hay as they are transported.

Newer twine products such as solar-degradable twine combine the advantages of both sisal and synthetics with a longer storage life before decomposition occurs. Regardless of the type of twine selected, it takes 20 to 30 turns to wrap a bale at a cost of about 50 cents per bale.

While the price of twine is cost effective, is the time spent wrapping bales with twine enough to offset a more expensive product?

With the introduction of net wrap in the late 1990s, many operators made the switch by upgrading to a new baler or equipping their twine balers with net wrap capabilities. Net wrap has many advantages over twine binding, such as improved baling efficiency, water shedding ability, and forage and transportation integrity. With only two to three turns required to wrap a bale, University of Wisconsin researchers found that producers can harvest 32 percent more bales per hour with net wrap versus twine.

One disadvantage of net wrap is the cost (about $1 to $1.50 per bale). In the Upper Midwest, where snow and frigid temperatures are common, net wrap can be very difficult to remove prior to feeding. In some cases, the time saved at harvest may be negated by the time spent removing net wrap during winter feeding.

The type of storage available may play a role in the type of binding to be used. Indoor storage is ideal for hay in order to maintain feed value and quality. Yet, this is not realistic in many situations, so outside storage methods need to aim at minimizing spoilage. As mentioned earlier, net wrap enhances water-shedding ability by covering a larger surface area of forage, resulting in less spoilage.

In University of Wisconsin research, outdoor storage dry matter losses were 7.3 and 11.3 percent for net wrap and twine, respectively. More important than binding type is placing bales north to south on well-drained areas with 3 feet between rows to promote airflow and reduce moisture accumulation. Poor storage can lead to excessive spoilage and the potential for 30 percent dry matter loss or more if not used for a year.

Some operations are considering the cost effectiveness of an enhanced water-tight forage covering such as plastic instead of building a hay storage building. Not only does plastic remove many of the same environmental elements as indoor storage, but it also reduces rodent exposure. At three times the cost per bale, plastic can improve forage longevity but makes moving hay more challenging.

It is never advisable to feed binding material to livestock; however, to save time, this advice often goes unheeded and the binding is left on prior to grinding forages. While there is not a large number of livestock fatalities reported due to ingestion of binding, most is undigestible.

In addition, Montana State University conducted a seven-month, cow-feeding trial using ground forage with the binding left on. They found that a large portion of binding was retained within the digestive tract and could potentially cause problems over time. Removing the binding reduces negative impacts on animal health and disposing of it correctly eliminates waste build up in the environment.

Producer preferences and equipment usually determine which type of forage binding is used. Cost is often another major decision-driver as well. Keeping track of time, labor, equipment, and storage losses is needed to determine which binding method is most cost effective. Although 1 to 5 percent more hay saved might seem small, it’s often these small savings that can add up to big ones in the long run.

This article appeared in the April/May 2019 issue of Hay & Forage Grower on page 16.