By Melissa Bravo
The author is an agronomic and livestock management consultant based in Wellsboro, Pa. 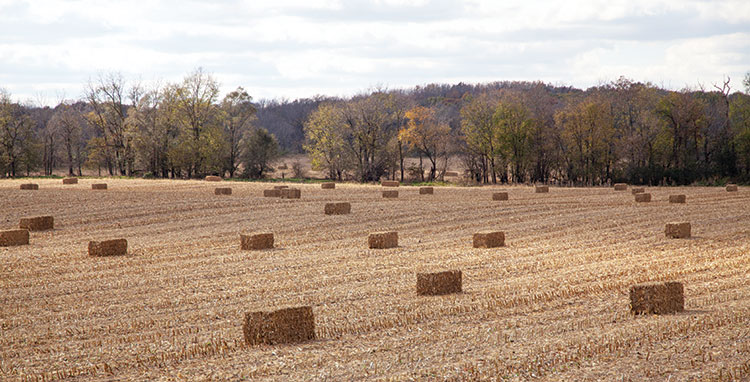 The selling price of corn stover in Lancaster County, Pennsylvania, has been as high as good alfalfa hay.

I recently rode with a hay seller to a Lancaster, Pa., hay auction and this article came to mind as I graded the quality of the hay, straw, and corn stover loads while buyers were bidding. I’ve been a certified crop adviser for 20 years and since receiving my master’s degree, forage quality and forage value has become my focus area.

So, when the first load of corn stover out-sold three loads of alfalfa at the Wolgemuth Hay Auction in Leola on the morning of March 13, it caught my attention. In our area, corn stover bales are mostly being used for dairy and horse bedding.

There were seven loads of corn stover bales consisting of both 3x3 and 3x4 square bales of husks, leaves, and stalks. Only two sold for less than the lowest priced alfalfa at $140 and $150 per ton. The other bids ranged from $220 to $250 per ton.

I went back down through the line and took a closer look at the corn stover quality in the back row that had not sold yet. One load in particular caught my eye. After confirming there was no mustiness, mold, or mildew on the crinkled corn husks, I asked Eric Motter of Myerstown to share how he produced his 7,500-pound load of 3x3 bales weighing a little over 500 pounds each.

He planted the third week of May and the Roundup Ready hybrid only received manure. I could clearly see the corn held its color until harvest and it yielded well. No foliar fungicide was applied.

“The day the baler came, I went out six hours before and lifted it; then I tedded it,” Motter said. “I waited two hours; then I raked it, and two hours later it was baled.”

So, was it worth it this year to bale the corn stover residues? It certainly was in Pennsylvania.

If we assume a yield of 3 tons per acre for baled corn stover, then anything over $215 per ton paid for the entire cost of producing corn for grain. At $245 per ton, the additional cost of raking, tedding, baling, handling, and hauling the stover should all be covered.

What’s driving the corn stover price when, on average, the value would normally be closer to mulch hay prices and not worth the cost to have it baled?

It’s all about quality and quantity this year. I’ve seen a lot of droughts affecting hay and straw availability over the last twenty years, but nothing came close to the shortages caused by the constant rain and cloud cover of 2018. Last year’s weather produced a bumper crop of mycotoxin-producing molds as well as mildew.

Here’s what Ohio State University’s ruminant extension veterinarian, Michelle Arnold, recently wrote in one of her blog entries: “While mycotoxins (mold poisons) are the main concern, molds themselves can adversely affect health and productivity of cattle. Ingestion of moldy feed or hay can potentially cause mycotic (fungal) abortion, respiratory effects, decreased feed consumption and rate of gain, and digestive problems. Additionally, molds can have effects on humans that handle the moldy feed. A wide variety of mycotoxins, not all of which can be tested for, can be produced in moldy feeds and hay under the right conditions, and ingestion of sufficient amounts of various mycotoxins can result in a large array of clinical effects.”

How many early term abortions have you had this year? Do you recall seeing some pink and green mold in your silage bags when you first opened them but fed it anyway because a little can’t hurt? How many young calves that were seemingly in good health have come down with an upper respiratory ailment? And don’t forget to take stock of the health of those working on your farm and their families.

Though it may change next year, clean, mold-free corn stover was worth its weight in gold this past fall and winter, generally covering or coming close to covering all associated production costs.

This article appeared in the April/May 2019 issue of Hay & Forage Grower on page 17.

More to alfalfa frost damage than meets the eye Next