Alfalfa nitrogen credits are a no-brainer 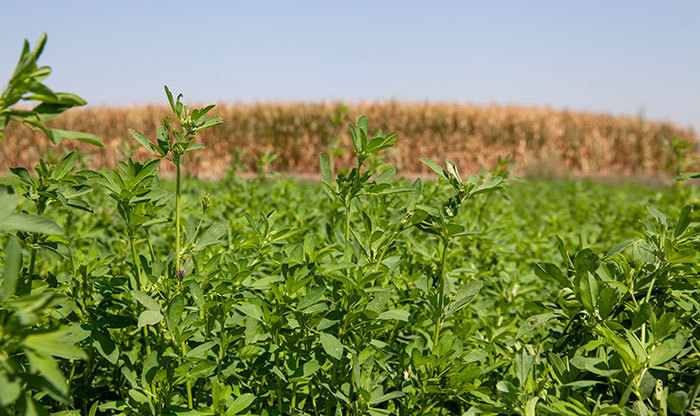 If you grow alfalfa, and if you grow corn for silage or grain, not taking advantage of the nitrogen provided by a terminated alfalfa crop is like flipping dollar bills into the toilet.

Apparently, this fact must be proven state by state.

Earl Creech, an extension agronomist at Utah State University, is on a mission to show growers in his state that there is big money to be had by accounting for the nitrogen benefits inherent with growing alfalfa.

Although his on-farm studies continue, he reported the results to date at last week’s Western Alfalfa and Forage Symposium in Reno, Nev.

“There are some costs in producing alfalfa that are fixed,” Creech said. “For example, you pay for land and water whether you have high yields or low yields. It makes sense that yield often drives profitability,” he asserted.

Alfalfa yield usually peaks in its first or second production year and then it declines from there. Ideally, we want most alfalfa stands to be on the high end of the production curve, Creech explained. That means stands have to be terminated at some point.

“If you go out into an alfalfa field, lay down with your head on a plant crown, and then you are able to make a snow angel without touching another plant, that’s a good indication that it’s time to terminate a stand,” he said jokingly while also making the point that some stands are simply terminated well beyond their useful life.

There are a lot of decisions and options to consider when terminating an alfalfa stand. Tillage, for example, can be done in the fall or spring.

Herbicide applications to take out the alfalfa can be done in the fall or spring, or after the subsequent corn crop has been planted and has started to grow. Finally, how much, if any, nitrogen should be applied to the subsequent rotational crop?

Creech has invested considerable effort investigating all of these factors across Utah.

Going to the farm

“These initial results led us to believe that the nitrogen provided by alfalfa was enough to take care of the subsequent corn crop,” Creech said. “We were hesitant to make a recommendation as drastic as this because our typical grower applies anywhere from 150 to 200 pounds of nitrogen to first-year corn.”

For Creech, the next step was to take his research and move it to multiple farm fields around the state. His on-farm trials encompassed 36 total fields in 10 different counties.

Once again, it was found that the difference in yield between the no-nitrogen treatment and the 200-pound treatment was only about 1 ton of as-fed silage per acre. “This would suggest that we probably can do without applying nitrogen to first-year corn,” Creech surmised.

As a part of the study, Creech’s team took spring soil samples to evaluate the nitrogen status of the soil. What they found is that there is more than enough nitrogen in the soil following alfalfa to meet the needs of a subsequent corn crop.

Small grains are a different story

After seeing the alfalfa-corn results, Utah crop producers were interested in knowing if the same no-nitrogen approach would apply to small grains following alfalfa. Initial results seem to indicate that a different approach is needed.

Creech again coordinated on-farm research in 2019. In 12 out of 17 sites where the cereal was harvested for grain, there was a significant yield response to nitrogen. The economic optimum nitrogen rate was found to be 60 to 105 pounds per acre.

Because small grains grow through fall, winter, and early spring, it’s thought nitrogen is slower to mineralize and be made available for crop growth, according to Creech.

In contrast, only two out of 10 sites responded to nitrogen when the small grain was harvested as forage. In these fields, the optimum economic nitrogen rate ranged from 0 to 50 pounds. The small grain trials will continue next year.

The alfalfa check is in the mail . . . or is it? Previous