We harvested a lot of dirt this year 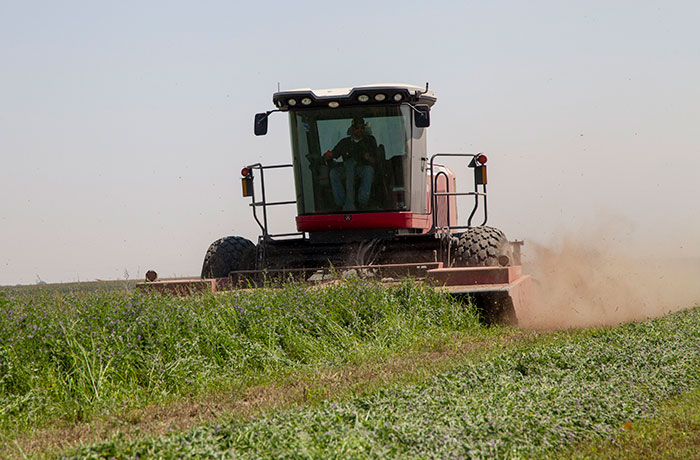 Ash in forages is the combination of minerals contained within the plant and soil contamination that is either splashed onto the surface of the plant while in the field or picked up during harvest. Minerals include potassium, calcium, magnesium, copper, and iron.

Weiss sites a study from the University of Delaware that evaluated the mineral composition of corn silage harvested after severe flooding. The study found that normal corn silage had ash levels of about 5 percent, but the samples from the flooded fields had concentrations higher than 20 percent. Iron levels were drastically different, and the concentration of aluminum from the flooded corn was five times higher compared to the normal silage.

The issue with ash

Minerals that are found inside the plant are not the issue, but supplementation should be adjusted based on the mineral concentrations within the forages. High levels of potassium reduce magnesium absorption and increase the risk of grass tetany. In this situation, supplement additional magnesium. Limit the feeding rate of high-potassium forages to dry dairy cows since they raise the risk for milk fever. A high level of sulfur is also an issue and affects copper and selenium absorption. Supplement more of these minerals when feeding high-sulfur diets.

Bigger issues occur from forages when the high concentration of ash is caused by soil contamination. Weiss lists the following negative factors associated with high-ash forages:

1. Since ash has no energy, if everything remains equal but ash concentrations rise overall, energy levels within the forages will be lower.

2. High levels of trace minerals such as iron, copper, and aluminum are toxic to rumen bacteria. This reduces fiber digestibility and in turn reduces the energy value of forages, lowering feed intake.

3. Soil that is high in clay greatly reduces the absorption of copper and zinc, which are both required nutrients for cattle and sheep.

4. High total dietary levels of iron are toxic to animals; however, the iron from soil-contaminated forages is mostly iron oxide and is low in toxicity. For this reason, high iron levels are unlikely to cause direct toxicity to cows. Increasing vitamin E supplementation helps alleviate some of the issues caused by high iron levels.

5. The greatest risk of high-ash forages is ruminal or abomasal impaction. Over time, the soil particles consumed by the animal settle out in the rumen or abomasum and fill up the organ. Eventually, this blocks the passage of digesta. Signs of this include lethargy, inappetence, constipation, and eventually death.

What to do about ash

Weiss notes the first step in evaluating ash is determining whether the ash is inside the plant or from soil contamination. Using iron levels is a good way to determine this.

“Forages with less than about 250 ppm iron usually do not have much soil contamination; but, as iron increases above that level, ash contamination from soil is likely,” Weiss explains. “If your forages have substantial ash concentration and high iron, the forage should be diluted with low-ash feeds and mineral supplementation may need to be modified.”

There still isn’t definitive data on ash, and we still have a lot to learn. Studies have shown effects on animal health but at varying levels. Be cautious about feeding forages with more than 4 to 5 percent additional ash when it comprises most of the total diet. Any forages with more than 13 percent ash caused by soil contamination should be diluted with uncontaminated feeds.

It’s one thing all haymakers have to do Next