By Carolyn Young
The author is a mycology professor at the Noble Research Institute in Ardmore, Okla 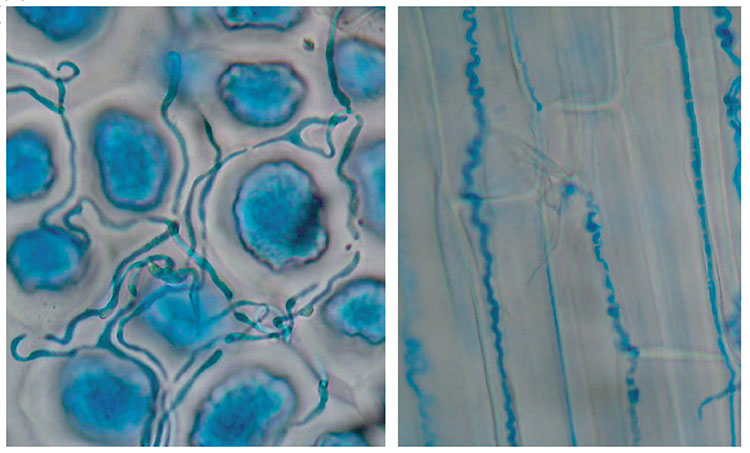 When plant tissue is stained, the strands of endophyte fungus become visible.

Tall fescue is widely adapted to the eastern United States and considered a valuable grass for livestock production. Fescue is also known for being a hardy and drought tolerant plant that can stabilize the land from erosion. But, as many producers know, fescue can have its dark side as most of the Kentucky 31 variety grown throughout the United States is infected with a toxic endophyte. This is a fungus growing inside the plant (endophyte).

Some strains of the endophyte can cause toxicity to grazing livestock through the production of compounds called ergot alkaloids. Fescue toxicosis, caused by the animal ingesting ergot alkaloids, can result in production losses for a producer in the form of reduced average daily gains and lower conception rates.

The grass is the most visible member of this symbiotic partnership, but I like to focus on the endophyte and know all about what it can do. However, I also have to think like an agriculturalist, an ecologist, and a plant breeder.

Is the endophyte good for forage and livestock production? What are the benefits to having the endophyte in the plant? What endophyte do we want in a new cultivar?

The endophyte found in tall fescue is a fungus called Epichloë coenophiala. This fungus lives in the plant where it gets transmitted through the seed to the next generation. If a tall fescue seed or leaf sheath is stained, the fungus in the plant becomes visible when you look through the microscope (see photo). The endophyte provides natural insect protection and can enhance drought tolerance and nutrient acquisition, meaning endophyte-infected fescue can have greater persistence over an endophyte-free counterpart. The presence of the endophyte is one of the reasons why fescue has been so successfully distributed across the United States.

When we sequenced the genome of E. coenophiala from the common tall fescue variety Kentucky 31, we saw the genes that encode the steps for ergot alkaloid production are grouped together in the genome. When the genes are present and active, the fungus produces ergot alkaloids, which can be readily detected where the fungus is found in the plant, such as in the seeds and leaf sheaths.

Interestingly, not all E. coenophiala isolates are identical. While most produce ergot alkaloids, some can only produce very low levels of these compounds; whereas, others lack the essential genes required for ergot alkaloid production so they are unable to produce any of the compounds. This type of natural genetic variation in the endophyte has been utilized to develop new endophyte-infected tall fescue cultivars that provide fescue with persistence without the toxicity.

Fescue toxicosis symptoms can be alleviated with various management practices. A better option is to take advantage of the new tall fescue cultivars that can completely alleviate the problem by eliminating any ingestion of the toxic ergot alkaloids.

More information on how to replace a pasture can be found through the Alliance for Grassland Renewal (grasslandrenewal.org/), which holds workshops in March each year across major tall fescue growing states. Although pasture replacement comes at a cost, the availability of a nontoxic pasture is worth it for improving livestock health and productivity.

A similar approach has been used successfully with perennial ryegrass to help eliminate ryegrass staggers in New Zealand and Australia. The ryegrass endophyte is a different species from the one found in tall fescue, but the approach is the same by fostering the development and use of novel, nontoxic endophyte-infected cultivars that have been adopted by producers.

Fun fact: Although this article focuses on tall fescue endophytes, many other cool-season grasses are endophyte infected but harbor different Epichloë species, including many grasses native to the United States.

This article appeared in the November 2019 issue of Hay & Forage Grower on page 22.

Is fescue toxicosis a problem in hay? Previous