Is fescue toxicosis a problem in hay?

By Gary Bates
The author is the director of the University of Tennessee Beef and Forage Center. 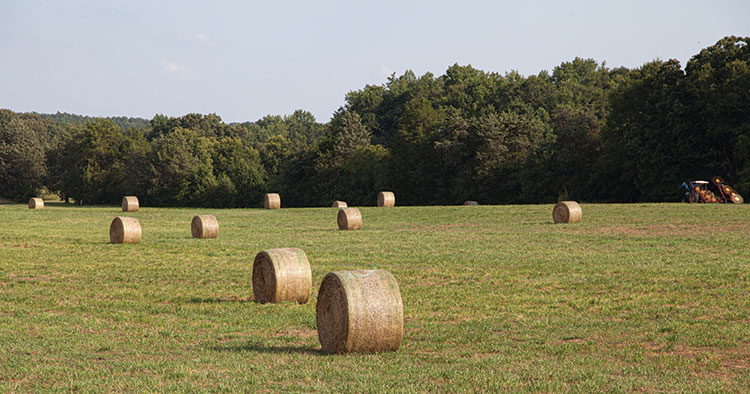 Tall fescue is the dominant forage species used in the eastern United States. Being a cool-season grass, it provides grazing during the spring and fall for many livestock producers around the nation.

The variety Kentucky 31 (KY-31), released in the 1940s, made a tremendous impact on the forage and livestock industry. Most people familiar with KY-31 tall fescue recognize that it has many positive attributes, but there are also a couple of negative issues that come along with the variety.

In the late 1970s and early ‘80s, it was discovered that KY-31 tall fescue is infected with a fungal endophyte now known as Epichloe coenophiala. This endophyte helps the plant be more persistent compared to other cool-season grass species, or even its noninfected counterparts.

Various research has shown that infected plants are more tolerant of drought, insects, and diseases. This improved persistence was one of the main characteristics that helped KY-31 be the predominant forage variety across a large portion of the nation.

Alkaloids are the culprit

Fescue toxicosis is caused by ergot alkaloids produced by the naturally occurring endophyte. Many scientists think that ergovaline is the primary alkaloid causing the issues, but there may be others involved. Research has shown that KY-31-infected tall fescue contains alkaloids all year, but the level is particularly high in the spring when seedheads are produced.

The practical result of this is that animals grazing tall fescue without the toxic endophyte will perform better than cattle grazing KY-31 infected tall fescue every season of the year. But the impact of the endophyte is much greater in spring and early summer, when tall fescue is producing seedheads.

There have been many developments and recommendations to reduce or eliminate fescue toxicosis. Interseeding clovers will reduce the impact of the endophyte on cattle production, while using one of the tall fescue varieties infected with a nontoxic endophyte will virtually eliminate the problem. Many producers are aware of the issue of fescue toxicosis and manage to deal with it in their grazing animals.

But what about fescue hay?

The question has come up recently about the toxicity of KY-31 infected tall fescue hay. Remember, the period when alkaloid levels are spiking in tall fescue is also the time when most producers are making their first cutting of hay.

Is the relative toxicity of KY-31 tall fescue for grazing similar to tall fescue that is stored as dry hay?

Research from the University of Missouri indicates that ergovaline and total ergot alkaloid levels decline significantly when tall fescue is cut, dried, and baled for hay. In their study, alkaloid levels dropped between approximately 30 to 60 percent when tall fescue was made for hay. A previous Missouri study showed that the majority of the decline occurred within the first 30 days.

It is important to realize that alkaloids were still present in the hay, sometimes to the level that there would be symptoms of fescue toxicosis. There were some situations in which the levels were reduced enough that any fescue toxicosis symptoms would be minimal.

These research projects, along with a few others, have given some practical methods to reduce the toxicity level of KY-31 tall fescue hay. Here are a few practices that can be used to lower the alkaloid level in tall fescue hay.

1. Raise the cutting height to 3 inches. Cutting tall fescue hay to leave a 3-inch stubble has long been recommended to help improve the persistence of a hayfield stand. But there’s another good reason to keep cutterbars above 3 inches. Research in Missouri and Kentucky has shown that often the highest levels of alkaloids are found in the bottom 3 inches of the plant. Raising the mower to leave the bottom 3 inches of forage will not only lower toxicity but improve stand persistence and overall hay quality.

2. Delay feeding for at least one month. During the haymaking process and storage, alkaloid levels will drop significantly over the first month, then slowly for the next 18 months. Even though tall fescue hay is usually not fed within the first month after it is produced, if conditions require hay feeding, using older tall fescue hay first will help minimize the alkaloid intake by animals.

3. Ammoniate the hay. Many producers have used ammoniation as a way to improve the digestibility of low-quality forage. Craig Roberts and his co-workers at the University of Missouri found that ammoniation also significantly reduced the ergovaline and total ergot alkaloid levels in tall fescue hay. While this may not be a tool the majority of hay producers will utilize, it could be important for producers that have generally high levels of alkaloids in their tall fescue along with the equipment and ability to ammoniate their hay.

4. Seed clovers in tall fescue hayfields. As mentioned earlier, interseeding clovers into infected tall fescue pastures is recognized as a strategy to reduce fescue toxicosis. Part of this impact may be due to the utilization of the nitrogen fixation ability of the clovers as a replacement of inorganic nitrogen application, which has been shown through research to raise the alkaloid level in fescue.

Using clovers as the nitrogen source for spring growth will help eliminate the large amount of nitrogen applied at one time, which increases the alkaloid content of the tall fescue crop. 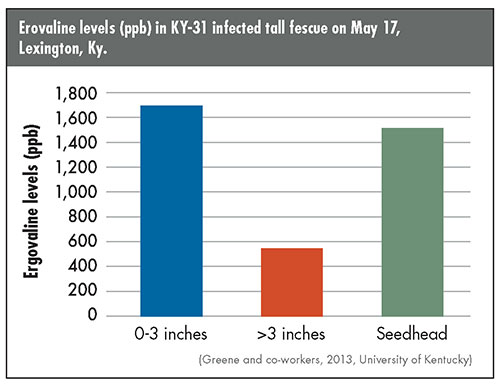 Fescue toxicosis is a major issue for every producer that utilizes tall fescue in their forage program. Some producers have chosen to eliminate the problem by using only tall fescue varieties infected with nontoxic endophytes, or possibly choosing other forage species.

Many producers still utilize KY-31 infected tall fescue in their grazing and hay programs. The recommendations listed here will not totally eliminate the risk of fescue toxicosis, but they will provide tools to minimize the losses when utilizing KY-31 endophyte-infected tall fescue hay during their winter feeding programs.

This article appeared in the November 2019 issue of Hay & Forage Grower on pages 6 and 7.

Endophytes provide benefits and challenges Next