USDA: Nearly everything is up 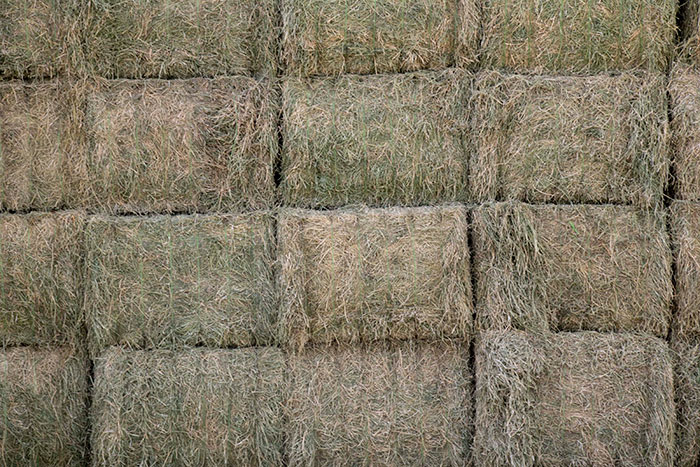 The annual slug of hay and forage data that defines the previous year’s hay production and year-ending inventories arrived in inboxes last Friday. The USDA’s Crop Production and Crop Production Annual Summary reports offer a glimpse of the current state of the forage industry and provide a gauge to measure hay market sensitivity to various production pressures in 2020.

Given the many weather struggles in 2019 that made it difficult to put forage in barns and silos, we might expect a dramatic downturn in yields and production. But that simply wasn’t the case based on the USDA data. Let’s dive into the numbers.

The USDA makes its assessment of dry hay stocks in May and December of each year. Last May, spring hay stocks declined for the second year in a row, though not as dramatically as in 2018. 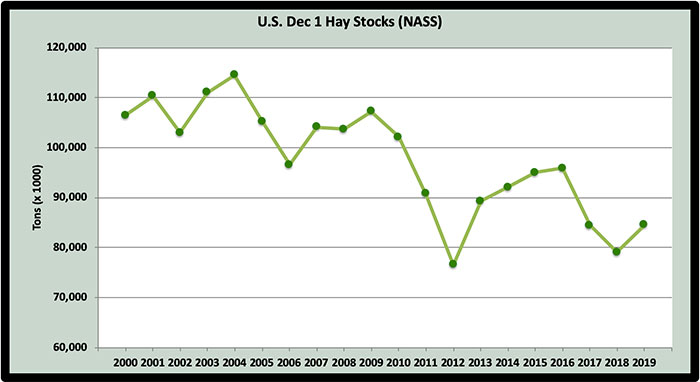 As might be expected, individual states varied in the total amount and direction of hay inventory change (see table below). Of the major hay-producing states, the largest inventory reductions occurred in these states:

Bottom line: The level of U.S. December 1 hay stocks has dropped about 10 million tons since 2016. At the same time, the U.S. has also experienced a significant decline in the amount of dry hay disappearance between December and the following May. Regional differences in hay supplies almost always exist, and high-quality hay is generally in the shortest supply even when overall inventories appear adequate.

USDA’s Crop Production Annual Summary set the final 2019 harvested hay acreage at 52.4 million, which was about 400,000 acres fewer than 2018. The estimates only include acres that had at least one cutting harvested as dry hay.

Harvested acres of alfalfa and alfalfa-grass dry hay mixtures climbed slightly from 16.6 million in 2018 to 16.74 million in 2019.

When considering alfalfa acres harvested for all purposes (hay, haylage, and greenchop), South Dakota holds the top position with 2 million acres. Wisconsin followed with 1.68 million acres while Idaho had the third largest acreage at 1.06 million.

New seedings of alfalfa and alfalfa-grass mixtures in the U.S. during 2019 totaled 2.47 million acres. This was 248,000 acres more than 2018. Wisconsin accounted for 170,000 of those additional new alfalfa seeding acres compared to the previous year.

Arizona and California continued to dominate the average alfalfa yield category in 2019, notching 8.3 and 7.1 tons per acre, respectively.

In 2019, virtually all U.S. acreage, yield, and production metrics were at least marginally higher when compared to the previous year. The one exception was a slight reduction in total hay acres, which was driven by a smaller number of hay acres that were not alfalfa.

U.S. dry hay production hit its peak in 1999 when 159.6 million tons were produced. Since that time, a slow but steady production decline has taken place, despite higher yields. In addition to producing less dry hay, we are also utilizing smaller amounts through the winter months. The growing popularity of higher moisture hay such as baleage might play a factor as well.

Hay markets are generally regional in scope. From these USDA reports it is easy to see that there was a wide state-level range of production gains and declines compared to the previous year. Extreme weather events are becoming more common, and virtually all of these are localized.

In addition to regional weather extremes, there are also localized market factors. For example, in the West, alfalfa exports often help to dictate market prices. In other areas, strong equine markets do the same.