Keep these grazing rules in mind 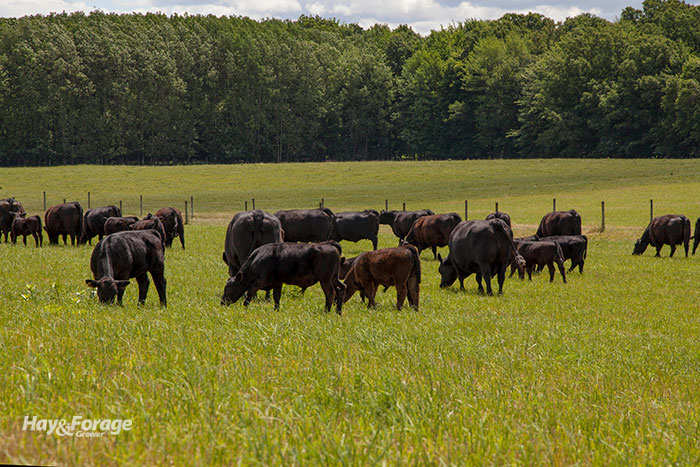 There are numerous rules people follow to make grazing decisions. Keith Harmoney, an extension range scientist with Kansas State University, recently expanded on a few of these rules in the March issue of Beef Tips.

Don’t overgraze and understock. Pastures sometimes develop locations of heavy usage and low forage availability as well as locations with little grazing and abundant forage. These pastures are often both overgrazed while also being understocked.

Watering location is one reason pastures develop uneven grazing. Animals won’t travel long distances for water. Since water is a necessity, animals will stick near the water source and overgraze that area. Adding water to remote areas of the pasture can improve movement and forage utilization.

An unconventional pasture shape or uneven landscape restricts animal travel. Change the shape of the pasture to encourage animals to stay in a particular section of the pasture to allow for underused areas to be grazed.

Lack of management is another reason for over and under used pasture. Continuous stocking with no change in management over seasons, and without rest periods, allows for animals to create grazing lawns with more use and less regrowth. Other ways to attract animals to unused pastures include mowing low-use sections of pasture, using supplements and proteins, and applying herbicides or molasses to enhance taste in underutilized areas.

What’s above ground reflects what’s below ground. As plants achieve greater leaf growth for photosynthesis, the excess sugars not used for producing more leaves are used for developing and growing root systems.

Grasses with abundant above ground growth have equally expansive below ground growth. Less productive grasses will have shorter root systems. These smaller root structures offer less protection to the soil and allow for greater water runoff. Compromised root systems extract less water from a smaller soil volume. As such, pastures with heavy utilization can create their own drought occurrence even in the midst of an average precipitation year.

Cool-season grasses begin rapid growth one month before warm-season species so these grasses will have even greater percentage of growth before July.

Don’t count on winter precipitation. Harmoney notes that producers often try to predict how much forage will be available for the next year based on winter moisture; however, weather data and pasture measurements show that winter precipitation has no relationship to subsequent pasture yield.

The scientist explains the best predictor for end-of-the-year production is the total accumulation of May and June precipitation. This better reflects growing conditions during the months when the greatest amount of grass growth occurs. This is especially true in dry seasons.

Poor baleage fermentation can lead to botulism Next