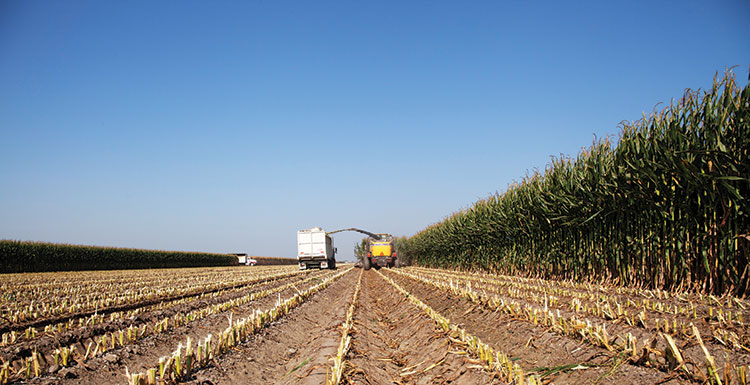 The San Joaquin Valley (SJV) of California is home to about 1.7 million lactating dairy cows, and that number of cows needs a lot of forage. However, SJV dairy farmers have a card that more northern locations do not — the ability to grow a winter and a summer crop on the same ground. Summer visitors to the dairy areas of the SJV will find field after field of corn (for silage); whereas, visitors in the winter will find those same fields largely covered with wheat — also for silage. Both silages are integral parts of the dairy feed system in the SJV.

Corn for silage is generally planted in April or May for harvest in September or October. This means that most corn crops will have the majority of their growth during the hot SJV summer and never get rained on in favor of applications of irrigation water timed to match plant growth needs.

In contrast, wheat silage is planted after the corn is taken off in the fall and is harvested in March or April. After an initial irrigation post-planting, it is not uncommon for wheat to be fully rainfed through harvest. In addition, wheat tends to grow relatively slowly in the cool SJV winter until day-length and ambient heat increase in late February to cause a growth spurt through the longer days and modest temperatures until harvest.

These growth conditions, for both crops, contrast dramatically to those in the North. As a result, SJV corn and wheat silages are dissimilar to the same crops grown in a Midwestern summer, for example. 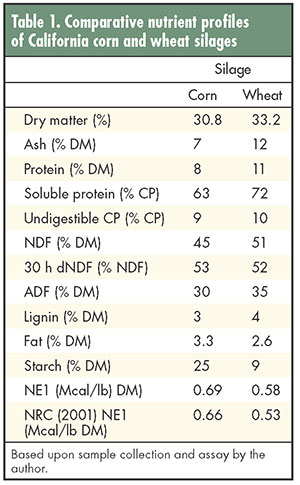 Corn and wheat silages, while generally similar, have important differences in their nutrient profiles. While there is substantial field variability for both wheat and corn silages, notable overall differences are the much higher level of starch in corn silage and the slightly lower level of protein.

Skipping right to the bottom of Table 1, wheat silage only has about 85% of the net energy for lactation (NEL) of corn silage, virtually all due to the higher ash levels of wheat silage. This is likely due to higher soil contamination of the shorter wheat plants and soil splash during rain events. Wheat also has a higher level of neutral detergent fiber (NDF), although its in vitro fermentability does not differ.

While the reduced feeding rates were primarily due to the lower NEL value of the wheat silage, it is likely that the higher NDF level of wheat silage, with its tougher structural integrity that stimulates rumination but may depress DM intake, plays a role in determining maximum feeding levels. As a result, in general, a high proportion of wheat silage produced in the SJV will find its way into rations of dry cows and replacement heifers.

Dairy nutritional consultants can formulate relatively high levels of both wheat and corn silages into lactation diets with little impact on milk production. However, the highest dietary inclusion levels for corn silage (about 25% of diet DM) are generally greater than the 15% of diet DM maximum for wheat silage. Even so, there were a couple of exception farms in the survey that had 24% and 29% wheat silage of diet DM.

The use of wheat silage in California high-cow diets is much lower than corn silage. However, when either is formulated into diets by nutritional consultants at up to 25% of DM, but more commonly up to 15% of DM for wheat silage, it has no discernible impact on milk production levels of high-group cows.