By Joshua Anderson,
Anderson is a senior research associate and Xue-Feng Ma is an assistant professor at the Noble Research Institute, Ardmore, Okla. 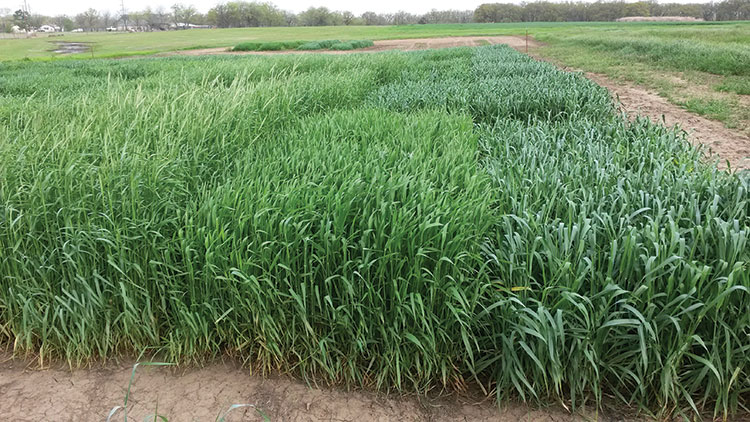 It is important to select the right crop or variety to fit an operation. Understanding environmental conditions and soil characteristics of the farm are helpful in selecting a proper crop. In general, rye is better suited for sandy soils or where temperatures are relatively colder; oat is more suitable for warmer regions or spring plantings.

Determining whether the intended outcome of the crop is to be grazed or harvested for hay will also facilitate variety selection. Awnless varieties are often preferred in a graze-out system or dry hay production because awns can cause irritation to eye and mouth areas of the animals.

Get a good stand

In general, later planting results in less total forage production of small grains. Follow the recommended planting dates for your location. Planting a few weeks early in the fall allows for more forage production as long as the crop is established with adequate moisture. However, planting early may also enhance the risk of certain pests such as Hessian fly or diseases such as barley yellow dwarf virus, which are vectored by aphids.

For early season grazing, boost seeding rates of small grains by 25% to 50% compared to seeding rates for grain-only production. A higher seeding rate can produce more forage early in the fall and help cover plant losses from trampling or uprooting during grazing. Planting a higher rate can also reduce stem thickness and make curing easier for silage or dry hay.

Adequate fertilizer amounts, based on soil tests, are required for maximizing forage production of small grains. In general, all small grains have similar fertility and pH requirements, although rye generally has better production where fertility is marginal or pH is low.

There can be a large variation in forage production from year-to-year and among different species and varieties of small grains. Small grains usually produce good pasture in late fall and early winter. Fall forage yields can be up to 3,000 to 5,000 pounds per acre, depending upon growing conditions. Production declines during the winter and generally resumes in mid- to late-February, depending on temperature and moisture conditions. Stem elongation usually occurs from late February to April in the Great Plains, and forage production can progress rapidly during this period.

Oat and barley can produce excellent yields during the fall; however, they also have the least winter hardiness and may get winterkilled in Northern climates. Spring-planting oat or barley for emergency pasture is a common practice when hay stocks fall short or after winter pasture burns. Generally, rye has the highest total-season long forage production, followed by triticale, wheat, and oat or barley.

Small grains provide high-quality forage during vegetative growth and can be a valuable option for grazing stocker cattle or yearling calves. Crude protein can range from 16% to 25%, which may exceed nutritional requirements of the animal depending upon the amount of available forage. Forage quality declines in late spring as the plant matures from a vegetative stage to reproductive.

Producing a high-quality silage from small grains requires attention to the crop because small grains advance from the boot to dough stage rapidly, and harvest can be delayed by unpredictable spring weather. Silage is generally harvested at boot stage or head emergence when crude protein can range from 10% to 12%.

Small grains may also provide a good source of dry hay to use as emergency feed during winter or drought. Crude protein can range from 5% to 7% at the dough stage when dry hay is usually harvested to maximize yield. Some producers try to optimize both forage quality and yield by harvesting at the flowering or early milk stage.

In general, forage quality of hay from wheat, barley, oat, triticale, and rye at the late boot stage is similar; however, rye can become less palatable as growth progresses. Have the hay tested for forage quality to determine whether a protein supplement is needed or how much is needed. Wheat straw may be used as a filler or fiber source in dry lot feeding operations.

Small grains can offer a variety of quality forage options that may be utilized by stocker operations, dairies, and feedlots. They can be grazed during fall in dual-purpose systems, grazed out, or harvested as silage or dry hay.

This article appeared in the February 2020 issue of Hay & Forage Grower on page 22.

A safe and tasty forage sorghum Next