A safe and tasty forage sorghum

By Shelby Gruss
The author is a graduate student pursuing her Ph.D. in agronomy at Purdue University. She was the winner of the American Forage and Grassland Council’s 2020 Emerging Scientist competition. 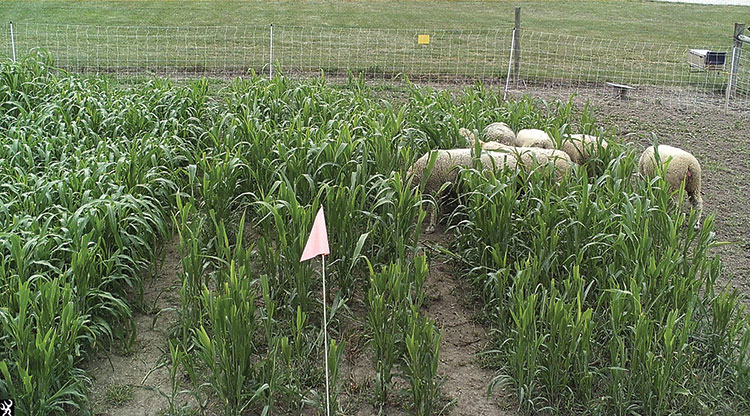 Sheep were used to evaluate a new dhurrin-free sorghum-sudangrass at Purdue University.

Sorghum-Sudangrass is an important crop worldwide. It has value as a forage resource and is cheaper to grow compared to many other summer annuals such as corn. It requires few production inputs and is drought tolerant, but there is often a fear among growers because of its potential for prussic acid production.

Prussic acid is produced in sorghum from the breakdown of dhurrin. Dhurrin accumulates in high concentrations in young plant tissues, varies in amount depending on the hybrid used, and accumulates under environmental stresses. All sorghum hybrids on the market today will produce prussic acid and must be fed with caution, especially if fed immediately after a frost or drought.

However, animals can be picky eaters — if they don’t like a forage, they won’t eat it. So, I, along with Johnson and Mitch Tuinstra, a professor of plant breeding and genetics, conducted a study to test animals’ preference for or against our experimental dhurrin-free hybrid. We also tested preference of the brown midrib (BMR) trait that offers higher fiber digestibility. Past studies show animals favor the BMR trait, which is a component of the experimental hybrid.

Using sheep as the test animals, we planted the hybrids in four small plots with four replications and allowed the animals to graze the hybrid they liked best in three grazing cycles. We determined the feeding preferences of the sheep based on the percentage of each plot grazed. Trail cameras documented the amount of time the sheep spent on each plot and we flew a drone each day to track changes over time.

Within the first day, we noticed a big difference in the amount of our hybrid grazed, and by the end of the grazing cycle there was barely any forage left. “The sheep ate the experimental hybrid to the ground, stalk and all,” noted Tuinstra.

Overall, data indicates that the experimental bmr6 DX hybrid was grazed at 51%, which was comparable to Sweet 6 and considerably higher than Greentreat Rocket’s 16% and Sweet Bites’ 15% consumption.

The trail cameras and drone data easily showed the reduction in plant material left within the plots. Halfway through the grazing period, there wasn’t much leaf material left on the experimental bmr6 DX. Data also indicated that the experimental hybrid was grazed first, but as plant and leaf material significantly declined, the sheep began to select other hybrids as their forage source.

We also calculated yields, another indicator of how well producers would accept the new hybrid. The experimental hybrid performed equal to the Sweet 6 and Sweet Bites and had a higher yield than Greentreat Rocket.

Overall, we believe bmr6 DX is an excellent option for farmers. It will take the prussic acid fear out of using sorghum as a forage. It is also palatable, at least by the sheep in this experiment.

Currently, Purdue and Ag Alumni Seed are collaborating to help move this new dhurrin-free trait to the market so that it can be made available to hay and forage producers throughout the United States.

This article appeared in the April/May 2020 issue of Hay & Forage Grower on page 17.

The miracle fall forage crop Next