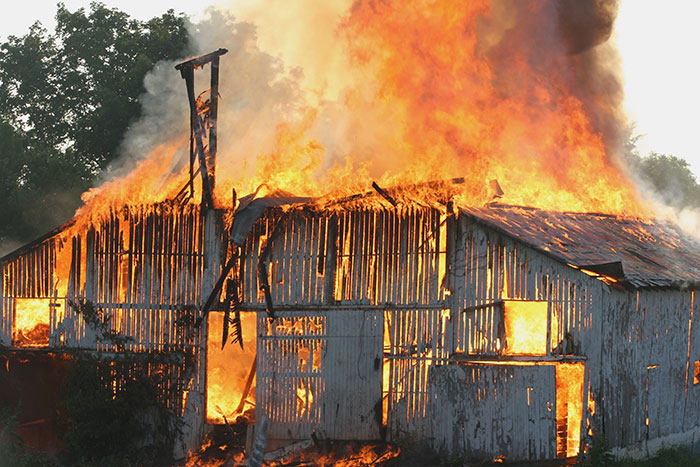 Every year across the country, hay fires cost farmers thousands of dollars in damages to buildings, hay, and equipment. With the right precautions, the risk of loss can be reduced.

There are several factors that contribute to hay fires, the most critical being proper hay moisture at baling, notes Leanne Dillard and Kent Stanford, Alabama Cooperative Extension forage specialists.

“Maintaining forage moisture levels at 15% or less will lead to minimal fire risk, but the risk rises significantly at 18% moisture levels,” the specialists explain. The risk continues to rise as the moisture levels increase. Hay with moisture levels between 16% and 25% are at a slight or moderate risk for fire. Any hay above 25% moisture has high ignition odds. In addition to the fire risk, high-moisture hay is likely to produce mold. Moldy hay produces toxins that can be deadly for livestock when consumed.

It may take several weeks for internal hay bale temperatures to reach 150°F, and large, dense haystacks may take a while to show signs of internal burning.

It’s important to note that some heating occurs naturally at low moisture levels with properly cured hay sometimes reaching 120°F in the first few days after baling. A fire risk is possible if those temperatures do not cool off after the first week.

“Even if the hay doesn’t catch fire, the heat will reduce the overall quality of the hay,” the specialists note. “Heat buildup causes proteins to bind to fiber, making them unavailable to livestock, and at 120°F to 130°F, 10% to 30% of the protein will be lost.”

Some years, the harvest season is wet and baling high-moisture hay is unavoidable. When this is the situation, several methods can help producers reduce the risk of hay fires, including conditioning the hay, the use of hay preservatives, changing hay storage, and shifting to high-moisture baleage.

Especially when making dry hay, using a mower equipped with a conditioner will aid in dry down rate. Interlocking rolls smash and break the plant stems, and flails rub away the waxy surface of the plant and break the stems. “Both processes can improve drying times; however, take into consideration the forage species being harvested before deciding which process is best for your operation,” Dillard and Stanford note. Flail conditioners can strip the leaves off of legumes.

Organic acid hay preservatives can be used to treat marginally wet hay and prevent heating and spoilage. These chemicals are sprayed at baling and require adding application equipment to the baler. They have been proven effective when applied at the correct application rate.

For untreated hay that is more likely to be at risk, store it outside in loose stacks or rows for four to six weeks. “This allows for easier access to check bale temperatures and will allow better air circulation in the bales,” the specialists explain. Although rainfall may cause hay to be unsuitable to be stored in the barn, if the hay does catch fire, the losses will be minimized.

In harvest seasons with excessive rainfall and lack of time to dry hay correctly, more farmers are instead cutting their drying times by harvesting high-quality, plastic-wrapped baleage.

Although hay barn fires are common and occur every year, proper harvesting and monitoring can help prevent your hay barn from turning into ashes.