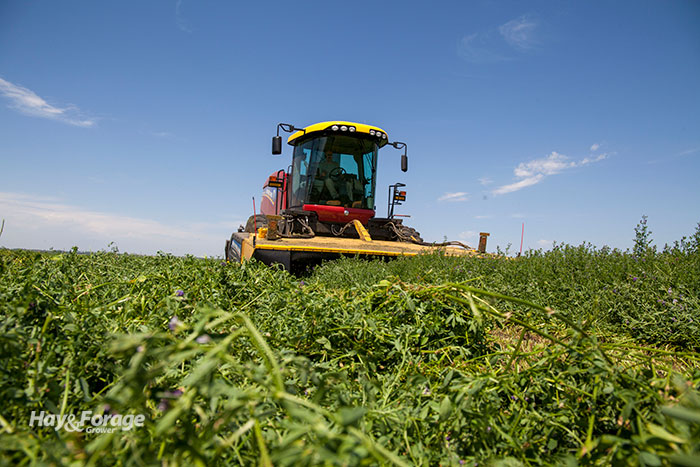 Some forage topics attract debate as if allowing mail-in election ballots was being discussed. One such example that has been around for a number of years now is whether there’s any compelling reason to exclusively cut hay in the late afternoon to maximize forage quality.

Although the topic can garner strong opinions from some people, I also have to admit that it’s a topic rarely brought up when I converse with forage producers. I think that I know the reason for this, but let’s take a closer look at why a person might mow hay only during the late afternoon or simply disregard the time of day.

The preference for late afternoon cutting is actually pretty compelling. Several studies that were done in the western United States showed a clear advantage to cutting hay in the late afternoon or early evening.

The PM-cut forage (both alfalfa and grasses) was both higher quality when harvested and the researchers also had convincing evidence that animals preferred it to AM-cut hay. The result was improved animal production.

Some basic plant physiology concepts drive the preference for PM-cut hay. Plants accumulate carbohydrates in the form of sugars and starches through photosynthesis during the daylight hours. These carbohydrates are produced faster than the plant can get them translocated to the root and crown or be used for growth and maintenance.

Concentrations of these nonstructural carbohydrates, which are nearly 100% digestible, reach a maximum toward late afternoon. In alfalfa, leaf-to-stem ratio also peaks at this time. The arid and semi-arid Western states’ research showed that they were able to hold this quality advantage of PM-cut hay through wilting, harvest, storage, and feeding.

Photosynthesis ceases during hours of darkness and respiration becomes the dominant plant process. The nonstructural carbohydrates are used during respiration for normal plant maintenance and growth. This leads to a declining concentration in plant tissues until the sun rises again and the cycle repeats itself.

Given the diurnal or daily variation in nonstructural carbohydrates, it seems logical to cut legumes and grasses in the late afternoon, but there’s just one problem — plant physiological processes don’t stop after the forage is cut.

Plants are like people in that they fight to stay alive, even after a traumatic experience like having their legs cut off. Respiration continues until plant moisture reaches about 50%. In fact, photosynthesis continues for those cut plants that are on top of the windrow or swath and exposed to sunshine. This is one of the compelling reasons for cutting hay into a wide swath, along with shortened dry-down times.

It’s where you hang your hat

In the West, low humidity, cool nights, and plenty of sunshine make for fast dry-down rates, especially for the initial dry-down phase to 60% moisture. Hence, cut forage quality is preserved more easily than in the more humid East. In the latter case, cutting in the morning is needed to ensure forage moisture reaches 50% before the overnight hours, or at least without going more than one overnight.

In regions where rainfall is more frequent than in the arid West, beating the weather trumps any strategy for time-of-day cutting. Morning cutting is almost always going to offer a wider window of confirmed favorable weather, at least in the short run. As hay growers know, having dried hay rained on can be devastating to forage quality.

There are two ways to optimize cut forage quality at a given plant maturity. One is to mow when it’s at its highest quality, and the other is with rapid dry down. The latter factor is the more important of the two. Though late afternoon cutting may be advantageous in arid Western regions, growers in humid areas will benefit from a morning cutting that is followed by several dry, sunny days.

Another factor that comes into play is the amount of hay being cut for chopping or baling. Those with small acreages may have a bit more flexibility of when to cut during the day. Conversely, producers with large acreages are going to want to get their hay knocked down fast and within the shortest window possible. This often doesn’t leave the option for narrowing the cutting window to a few hours in the late afternoon.

The advantages of late afternoon cutting may sometimes be put into play for humid regions where rapid drying rates are ensured. This might be the case for some late summer, lower yielding cuttings. It also may apply when the forage is harvested as greenchop.

It’s the “other” haymaking tool Next

A world of hay lovers and haters Previous